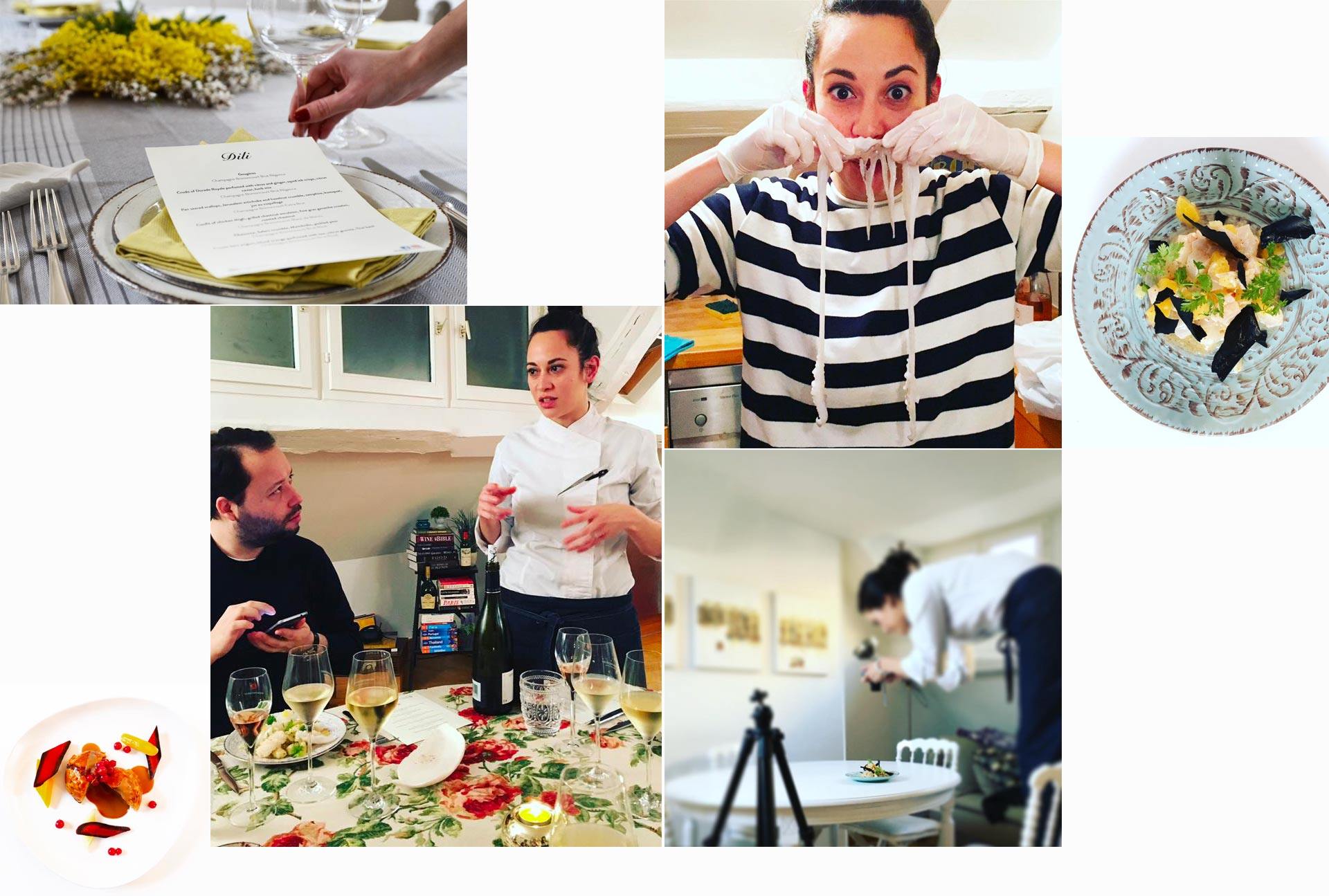 After coming to Paris to learn cuisine, Lizzy was seduced by the idea of starting a career in cuisine, a chance she could not let pass by. After having worked at Ze Kitchen Galerie and Verjus in Paris, Lizzy, along with 2 former students (Diogo and Christophe) of Le Cordon Bleu Paris institute, has started a new adventure: Dili Gastronomy…

Growing up in Hong Kong, food was always the centre of our family life, all family gatherings revolved around the dining table. So when I moved away for university I really missed the stabilizing influence of family meals. I couldn't cook at all at the time but I started asking my mother to send typical family recipes so I could have a part of my home with me. The very first one was roasted quail marinated in five spice powder! Once a gained a little confidence in the kitchen I started to branch out on my own, exploring middle eastern cuisine especially as well as making cakes for friends birthdays, hosting elaborate dinner parties and making my own bread.
Even at this point I felt that what had become an all-consuming passion, was still just a hobby. My mother suggested that I come to Paris for the summer just to do the basic cuisine course and I jumped at the chance and got on a plane.

I was only supposed to be in Paris for one summer but I was so inspired by the basic cuisine course, the Chefs and especially the potential of having a career in food. It was a chance that I just couldn't let slip.

It is almost impossible to pick out a single memory. Meeting some of the biggest chefs in the world at Omnivore in 2013 was an amazing and instructive experience. Also, meeting Christophe, who would go on to become my husband was unexpected but wonderful.

After graduating from Le Cordon Bleu I went on to do my two month internship at Ze Kitchen Galerie under Chef William Ledeuil. This was an extremely challenging time, having never worked in a professional kitchen before. It was a real eye opener to the hours and energy it takes to make a Michelin-starred restaurant run smoothly. What amazed me most was the energy of the team and the camaraderie. I was rewarded by being given a post as commis by Chef Ledeuil. This was an even steeper learning curve! Having been a stagiaire for two months I was completely unprepared for the responsibility that comes with being part of a kitchen brigade. I found it difficult to find my place in the team and master my responsibilities while pushing to progress to a higher level of responsibility. In the kitchen it is always a competition!

After leaving Ze Kitchen Galerie I started as a “Chef de Partie” at Braden Perkin's restaurant Verjus. This was a complete departure from a traditional French brigade system. This kitchen was very egalitarian and relaxed in spirit. I really gained confidence in the techniques and skills that I had learned at school as well as learning more modern techniques. It was amazing to work in a team where every person felt they had the space to voice their opinions and try out new dishes without judgment or criticism.

A year into my time at Verjus, the owners decided to open a second restaurant - Ellsworth, where I was “Sous Chef”. Here I learned the difference between being a cuisine chef and being in a management position. The time I spent at Ellsworth was the most difficult and the most rewarding of my career so far. I worked in an extremely tight team who were all extremely supportive, even when under extreme pressure. Also, being part of a restaurant from its inception is in invaluable experience to any cook as you learn to be a quick and efficient problem solver. Creatively, Ellsworth gave me the perfect environment to make my ideas a reality and understand what works and what doesn't; how far you can push a diner's palate and expectations.

My best advice to future students would be to be humble and remember that Le Cordon Bleu is a stepping stone to the start of a career. Working in a professional kitchen is harder than you ever imagine it will be, more tiring and more frustrating. However, if you stick with it, it will also be more rewarding that you ever realized was possible.

Now, in Paris, I am starting a private dining and food experience company called Dili Gastronomy with two other Le Cordon Bleu students (Christophe Carré and Diogo Veiga). At the moment we are serving private dinners to clients in a beautiful apartment overlooking the Eiffel Tower. We offer our clients a truly private, luxury dining experience with wine pairings. We have found that our clients really enjoy an experience that is at the same level as a high end restaurant but with direct access to the Chef and Sommelier so that they are not only more involved in their meal but also they understand its authenticity.

Our plans are to continue building our brand as well as increasing the number of clients we serve a week. We are already working on projects in restaurant consultancy and pop ups in other countries. We are always looking to expand our potential by being open to any opportunity that comes our way, whether it been in larger scale catering, bespoke dining experiences and overseas projects.