Maxence Barbot, pastry sous-chef at the Plaza Athénée in Paris

In November 2017, we were delighted to welcome a young French pastry prodigy: chef Maxence Barbot.
A French chef, aged just 26 years old and born in Boulogne, Maxence Barbot studied cuisine and pastry before launching his career as a pastry chef.

Chef Barbot spent almost 5 years in numerous renowned, and Michelin-starred, pastry establishments, rapidly rising through the ranks.
He began his career at the Plaza Athénée hotel.  In 2013, he decided to expand his culinary horizons and began working at the Four Seasons George V, initially as chef de partie with Lucien Gauthier, before going on to become pastry sous-chef, excelling in the creation of plated desserts.
In November 2016, Maxence Barbot became 1st pastry sous-chef at the Plaza Athénée hotel in Paris, working alongside chef Angelo Musa to create the luxury hotel’s pastry selection. 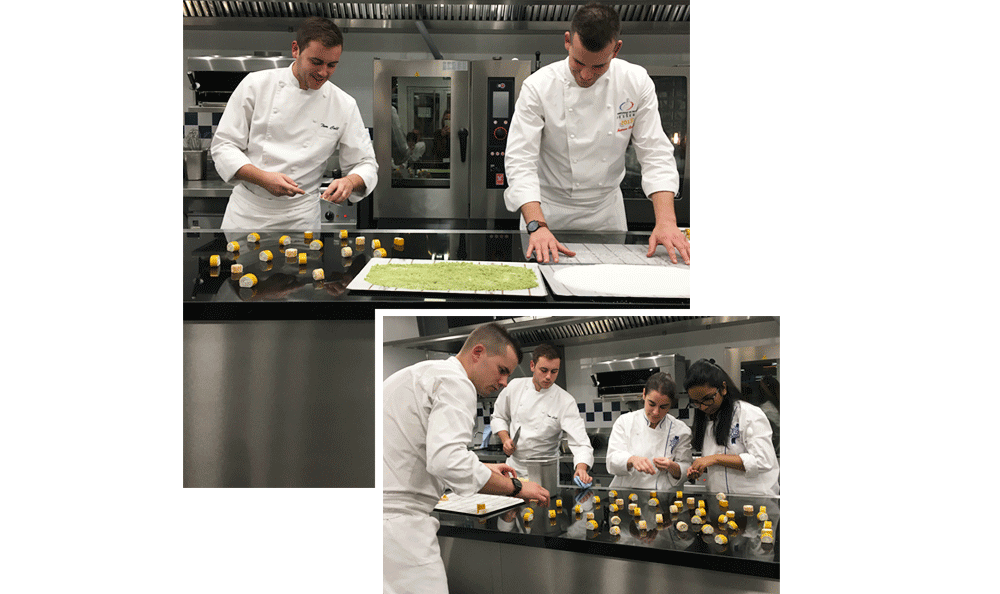 Chef Maxence Barbot regularly takes part in competitions. In 2011, he won gold medal at the Olympiades des métiers. Two years later, in 2013, Maxence was awarded the title of French runner-up at the French plated dessert championship.

In order to pass on his passion and expertise, chef Barbot became a pastry instructor and gives training sessions and demonstrations to chefs and future chefs. It was on one such occasion that he gave a pastry demonstration to Le Cordon Bleu Paris students, in November 2017. Maxence Barbot was accompanied by his friend, and former kitchen brigade member, Tom Coll, who is currently a pastry chef at Parisian luxury hotel the Shangri-La. They made the following recipes: