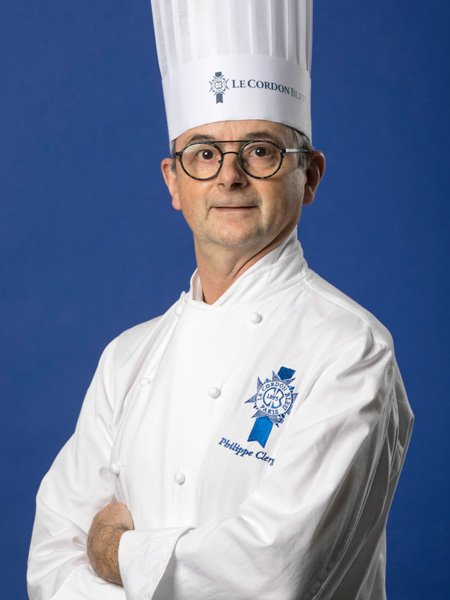 Originally from the Midi-Pyrénées region of France, Chef Philippe Clergue was awarded a Certificat d’Aptitude Professionnelle (CAP) in cuisine in Toulouse and a Brevet de Technicien Hôtelier. He then began an apprenticeship at the 2 Michelin-starred Relais de la Poste restaurant in Magescq, in the Landes region of France.

His professional career began as Chef de partie, at this very same restaurant, in 1981. In 1984, Chef Clergue began working as maître d’hôtel at the Elysée Palace, the official residence of the President of the French Republic. In 1985, he joined the team at the 1 Michelin-starred Leï Mouscardins restaurant, in St Tropez, before becoming second de cuisine at the 1 Michelin-starred Relais de Saulx restaurant in Beaune in 1987. In 1990, he opened his own restaurant, L’Auberge de la Toison d’Or, in Beaune, which he ran for fifteen years. During this time, he also taught cooking lessons, both in his restaurant and in private homes.

In May 2006, he joined the elite team of Chef Instructors at Le Cordon Bleu Paris. In 2011, he was a finalist in the One of the Best Craftsmen in France (Meilleur Ouvrier de France - MOF) competition. In 2013, he began working in China. In his role as Technical Director, he was tasked with setting up the country’s first Le Cordon Bleu institute in Shanghai. A year and a half later, the Institute welcomed its first students.