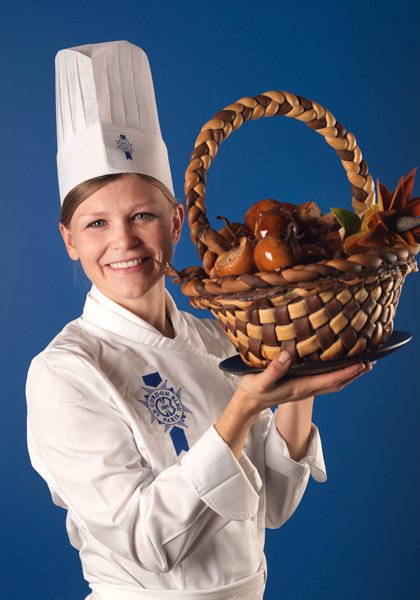 Alexandra Didier was born in Ukraine and came to France at the age of 20 to study foreign languages at the Sorbonne University. She discovered French gastronomy, and her passion was ignited. Alexandra Didier undertook a cuisine training programme alongside her studies and was awarded a Certificat d’Aptitude Professionnelle (CAP) in 2005.

Her professional training began with chef Féval at the Cap Seguin restaurant in Boulogne, on the outskirts of Paris. She began as commis but rapidly climbed the ladder. After a year and a half, when chef Féval left the restaurant, the owner decided to appoint her to the position of Chef. She was in charge of the kitchen brigade and the restaurant’s menu.

In 2009, Chef Didier joined the kitchen brigade at the two Michelin-starred Four Seasons George V Paris hotel’s Le Cinq restaurant. She began in Room Service, before moving on to the role of commis for over two years. She was then put in charge of organising banqueting packages in her role as demi-chef de partie, continuing as chef de partie for three years.

In 2016, she joins Le Cordon Bleu team of Chefs to manage the menus at Le Café and the organisation of buffets for culinary events. In 2019, Chef Didier is promoted as Chef Instructor.