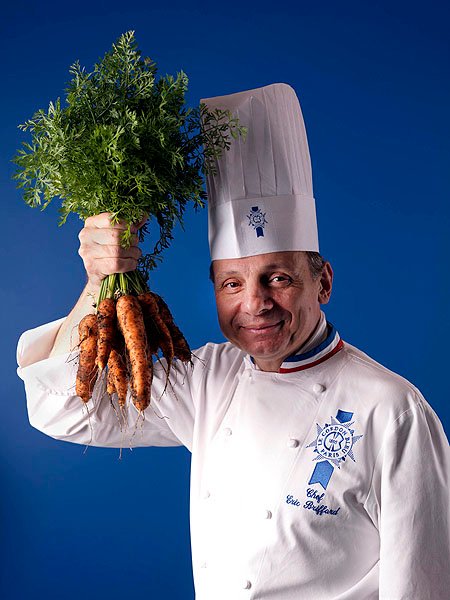 Originally from Burgundy, Chef Briffard began his cuisine training at the Relais Saint-Fiacre. He then became a compagnon (craftsmen’s guild apprentice) at the Concorde Lafayette Paris hotel, L’Espérance, and the Manoir de Paris.

At 28 years of age, he was appointed Chef of the Royal Park Hotel’s restaurant, Palazzo, in Tokyo, before being named Chef of Jamin restaurant (Paris) by his mentor Joël Robuchon.

Several years later, he decided to focus on his own style of cuisine and made his mark at the 1 Michelin-starred Château de Fère en Tardenois. Upon his return to Paris, he was put in charge of the kitchens at the Hôtel Plaza Athénée and was awarded 2 Michelin stars for gastronomic restaurant, Le Régence, a feat he repeated in 2007 at Les Élysées du Vernet. In 2008, Éric Briffard began managing the kitchens of the Four Seasons Hotel George V and was awarded a further 2 Michelin stars for Le Cinq.

Chef Briffard was crowned One of the Best Craftsmen in France (Meilleur Ouvrier de France - MOF) in 1994. He was named Chef of the Year 2010 by the Pudlo guide, received 4 chef hats from the Gault&Millau restaurant guide and a Grand Prix for his book Éric Briffard Le Cinq (published by Glénat). In 2016, he was awarded the Grand Vermeil medal from the city of Paris. He is also a Knight of both the Order of Agricultural Merit and the Order of Arts and Letters. In 2018, Chef Briffard was awarded a Knight in the World Order of the Culinary Academy of France medal and the “2018 Transmission of Knowledge Chef Trophy”.

The confessions of a Michelin-starred Chef