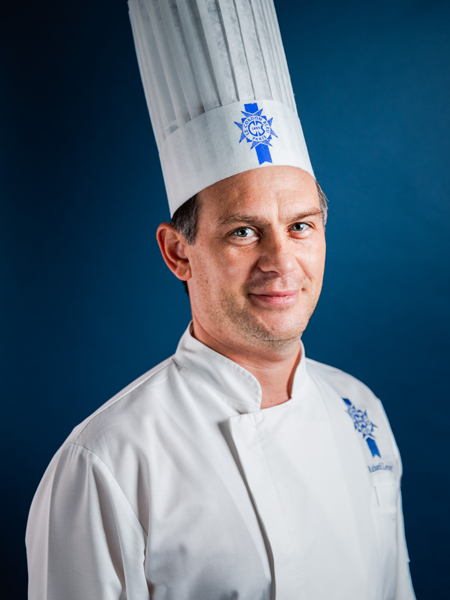 Originally from Paris, Chef Lecoq successfully completed his “Certificat d'Aptitude Professionnelle” (CAP) and his “Brevet d'Études Professionnelles” (BEP) in pastry in 1997. He accomplished his apprenticeship in the family company Christian Lecoq Pâtisserie before continuing his career and training in cuisine and catering at Traiteur Brigant, in Boulogne. In 1998, he obtained the “Mention Complémentaire Traiteur”.

Returning to his first passion, he worked at the Pâtisserie de l'Église in Paris from 1998 onwards, before enriching his experience by joining the prestigious Dalloyau, where he occupied several positions from 2000 to 2004, alongside two MOF chefs Pascal Niau and Yann Brys. He obtained his “Brevet de Maîtrise” in 2002 and his “Brevet de Maîtrise Supérieure” in 2004.

Chef Lecoq returned to the family company in 2010, taking charge of a team of 5 people and trainees from all over the world. He then headed to Mexico to open Pâtisserie Richard Lecoq giving pastry classes to professionals and amateurs alike until 2012.

Returning to Paris in 2013, the Chef worked alongside Frédéric Lalos, MOF Boulanger, at the Quartier du Pain, and then in Pastry with the events caterer and creator Potel et Chabot with Marc Rivière, World Pastry Champion.

He finally returned to his passion for teaching by joining the team of Chefs at Le Cordon Bleu Mexico, where for 9 years, he taught pastry and boulangerie.