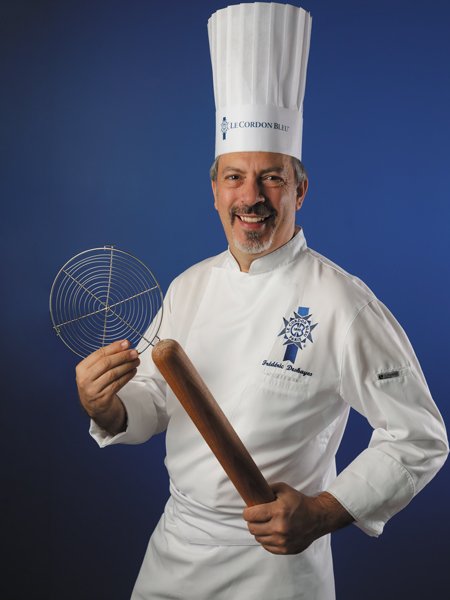 Originally from the Île-de-France, Chef Frédéric Deshayes’s skills made him shine in both cuisine and pastry. He was awarded a Certificat d’Aptitude Professionnelle (CAP) in cuisine in 1986 and one in pastry in 1988.

He perfected his techniques and style in restaurants such as the two Michelin-starred Le Pré Catelan. He decided to take his career to the international stage, moving to Belgium, and South Korea, where he worked in diverse, internationally renowned, pâtisseries. In 1997, he began working at L’Ami du Pain, in Japan, as pastry Chef for their 2 restaurants. He then took on the role of second to Chef Grégory Collet at the Grégory Collet pâtisseries in Kobe, Japan, before returning to France to work for Pierre Hermé.

In 2003, he joined Le Cordon Bleu Paris institute team of Chef Instructors, where he remained for 2 years. He went on to become pastry sous-chef at the Plaza Athénée hotel. Several years later, he went to Singapore, working in a culinary arts school as Executive Chef Instructor for 8 years, until 2014. His next move was entrepreneurial, with the opening of a bakery/patisserie, Do-main Bakery, in Singapore. He eventually decided to return to France, and carried out international assignments for the Pierre Hermé group.

He was the Silver Medal winner at the Concours d’Arpajon in 1988. In 2011, he was captain of the pastry team representing Singapore at the Junior World Pastry Cup, in Italy. In 2016, he was named Best Pastry Chef at the World Gourmet Summit in Singapore.