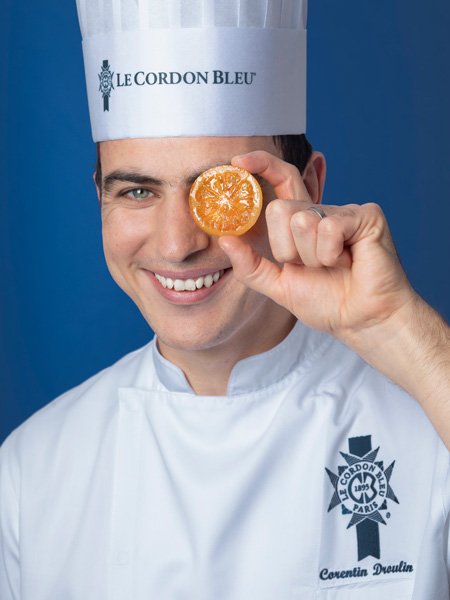 Chef Droulin is originally from the Picardy region of France. His apprenticeship in a patisserie enabled him to master the foundations of boulangerie, pastry and chocolate and gain solid experience in all the preparatory stages linked to these professions: chocolates, freshly baked pastries, entremets, bread, ice cream, confectionery and ceremonial creations.

In 2012, with his Brevet Technique des Métiers (BTM) Pastry-Confectionery-Ice Cream-Chocolate qualification in hand, he joined the team at the Hôtel de Crillon’s Les Ambassadeurs restaurant, in Paris, before moving on to Chef Hélène Darroze’s restaurant at The Connaught in London. These were two pivotal experiences in his career, marked by the organisation, discipline and excellence exemplified by gastronomic restaurants.

In 2014, Chef Droulin took part in the opening of the Shangri-La Hotel in London, where he was responsible for setting up the entire pastry division. Upon his return to Paris, he joined Chef Thierry Marx’s team at the Mandarin Oriental hotel.

In order to add another string to his bow in the pastry profession, he decided to work as a pastry Chef for event caterer 4810 Réceptions, where he managed the production of sweet cocktail pieces, entremets, pièces-montées and organised the entertainment for large events.

Chef Droulin is currently working and studying for his Brevet de Maîtrise (BM) in pastry.