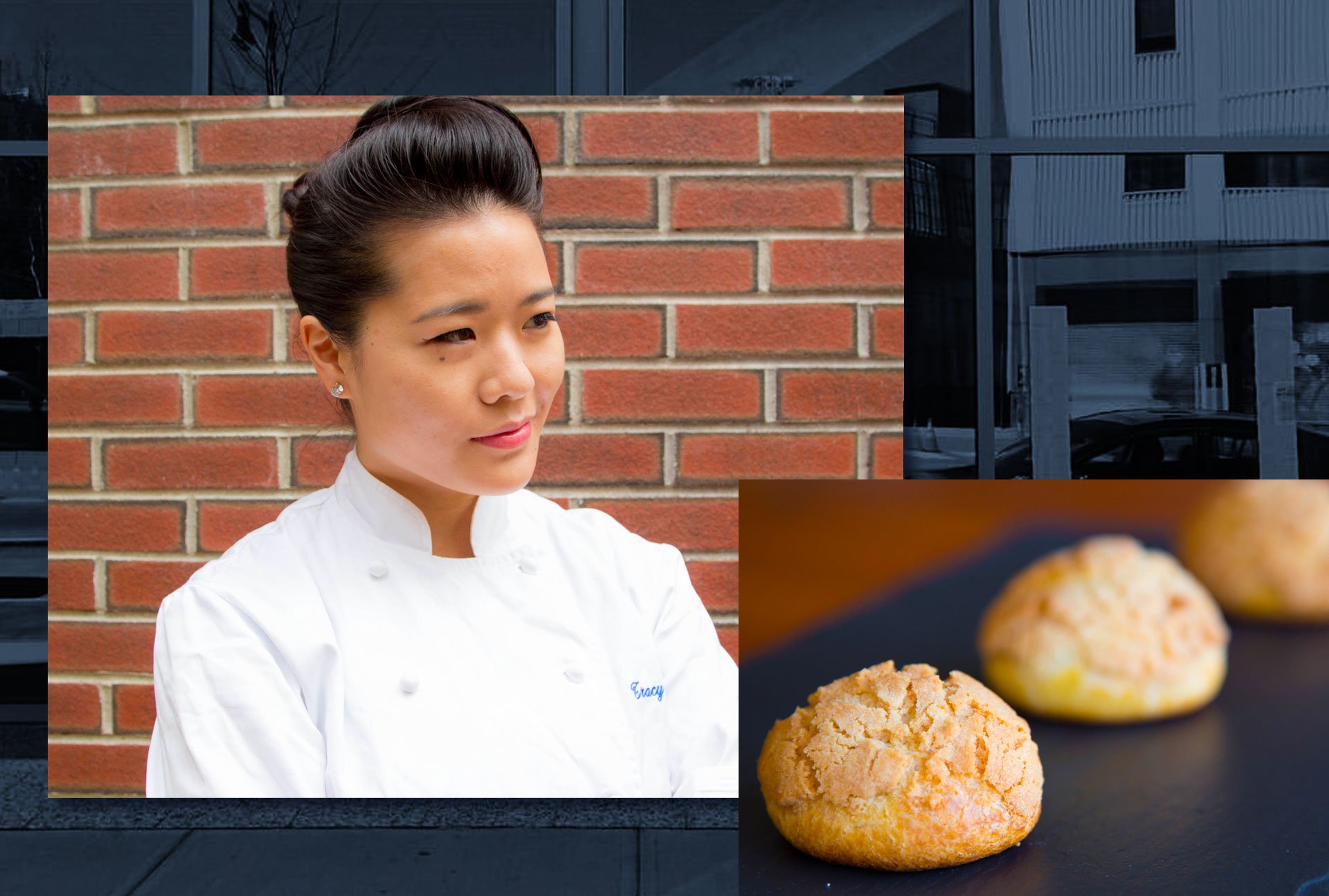 Since childhood Tracy Chang is passionate about pastry. She talks about her projects including the opening end of October 2016 of her first restaurant PAGU in Cambridge, Massachusetts

What made you want to study pastry?

When I was a kid, I loved dessert and always enjoyed baking for school bake sales, birthday parties. This tradition carried through to college where I spent my time studying in the kitchen while baking and cooking with friends. It made finance, marketing and group projects more interesting when they were covered in flour, chocolate and sugar.

Having grown up in my grandmother’s Japanese restaurant, Tokyo, I have always had a natural affinity to seafood and its preparation. While working at O Ya, I loved the discipline and technique of Japanese cuisine which reminded me of childhood. Since we didn’t have a pastry chef, and I was the most enthusiastic about pastry, I began tinkering in the kitchen there. I used Japanese ingredients to create items for the tasting menu as well as special events and holidays such as liquid bon bons, mousses, savory and sweet intermezzos. I reached a point where I wanted to learn more and not just tinker on my own. I craved a solid foundation, rigorous pastry training and mentorship, which led me to apply to Le Cordon Bleu Paris.

What is your favorite memory from your adventure at LCB Paris?

I have many fond memories of LCB Paris. If I had to pick a favorite, it would be the day we made the plaisir with Chef Jean-François Deguignet. Up to that point, we had had other chefs for demo, but never Chef Deguignet, who taught mostly the advanced courses like chocolate and sugar. When he taught, he was quiet, patient, and exact. His movements were precise and concise. When he was finishing the demo, he whipped cream to pipe. We’d made and seen whipped cream many times, but for some reason, his looked more perfect, a simple elegance. Then to finish the class, he taught us a new trick. We had never seen the process done, only the result. The result was a beautiful, chocolate peony atop a chocolate gateaux in my favorite pâtisserie in Lyon: Bernachon. Bernachon had the most heavenly, chocolate smell and I remember looking at all the chocolate peony gateaux in the window, wondering how they were created. It was literally, the “icing on the cake”, when Chef Deguignet demystified the process, and taught us how to temper the chocolate properly and then once at its optimal temperature, shave it swiftly with the swoop of a knife, to create chocolate “fans”. The fans, when done on a larger scale, would create petals just like the peonies atop the gateaux at Bernachon.

I studied finance at Boston College. In my final year, I started working at O Ya, which had received the Best New Restaurant in the country in 2008 by the New York Times. From O Ya, I went to study intensive pâtisserie twice at Le Cordon Bleu Paris, basic in August 2009 and then intermediate in November 2009. Afterwards, I won a scholarship to cook with Martin Berasategui, so I worked with him in 2010-2011. What began as a stage, led to a full time offer, not just in the kitchen, but also traveling with him, leading his marketing, PR and communications, and creatively directing his TV program with David de Jorge, Robin Food. In 2012, I returned to Boston and co-founded Guchi’s Midnight Ramen (GMR), a pop-up experience that began as public pop-ups in restaurants and evolved into public and private events for communities such as non-profits, tech, and universities. From 2012-2015, I was creating, cooking and managing pop-ups for GMR as well as private cheffing, before I found the space and signed a lease for my forthcoming restaurant, PAGU.

When and how did the pastry adventure begin?

The serious pastry adventures began in Paris with Le Cordon Bleu. I was in intensive classes with classmates from around the world who were as eager and stimulated as I was to learn as much as we could in the short amount of time we had. We had class 9 hours / day and sometimes 6 days / week. The time we had outside of class, we would hold dinner parties, practice our pastry techniques and recipes, and explore pâtisseries around the city, in search of inspiring flavors and textures. I went on several endeavors, in search of the best macaron, the best croissant, etc. Those were some of the best months of my life, and every time I return to Paris, for a few days I try and recreate those moments.

What advice would you give to pastry students?

Pay attention to the details. Take good notes. Ask a lot of questions. Take photos, take videos. Make meaningful friendships with your peers and your teachers. You will carry those for the rest of your life.

Could you describe your new life in the USA?

I’m preparing to open a restaurant in a few months, and there is so much to do! I am in a different stage in my life, where I can’t run around Paris in search of the best croissant. However, I am empowered with the knowledge and experiences to know what makes a croissant flaky, when do people eat croissants, how much are they willing to spend, how many people do I have to hire to prepare the croissants, etc.

I’ll be serving more than croissants at my restaurant, but just like croissants, there are a lot of layers to a restaurant: time, technique, patience, trial and error, people--all make a difference. I’m not in search of the best croissant in Paris, because I’m eager to create and to be the best “croissant” in Boston!