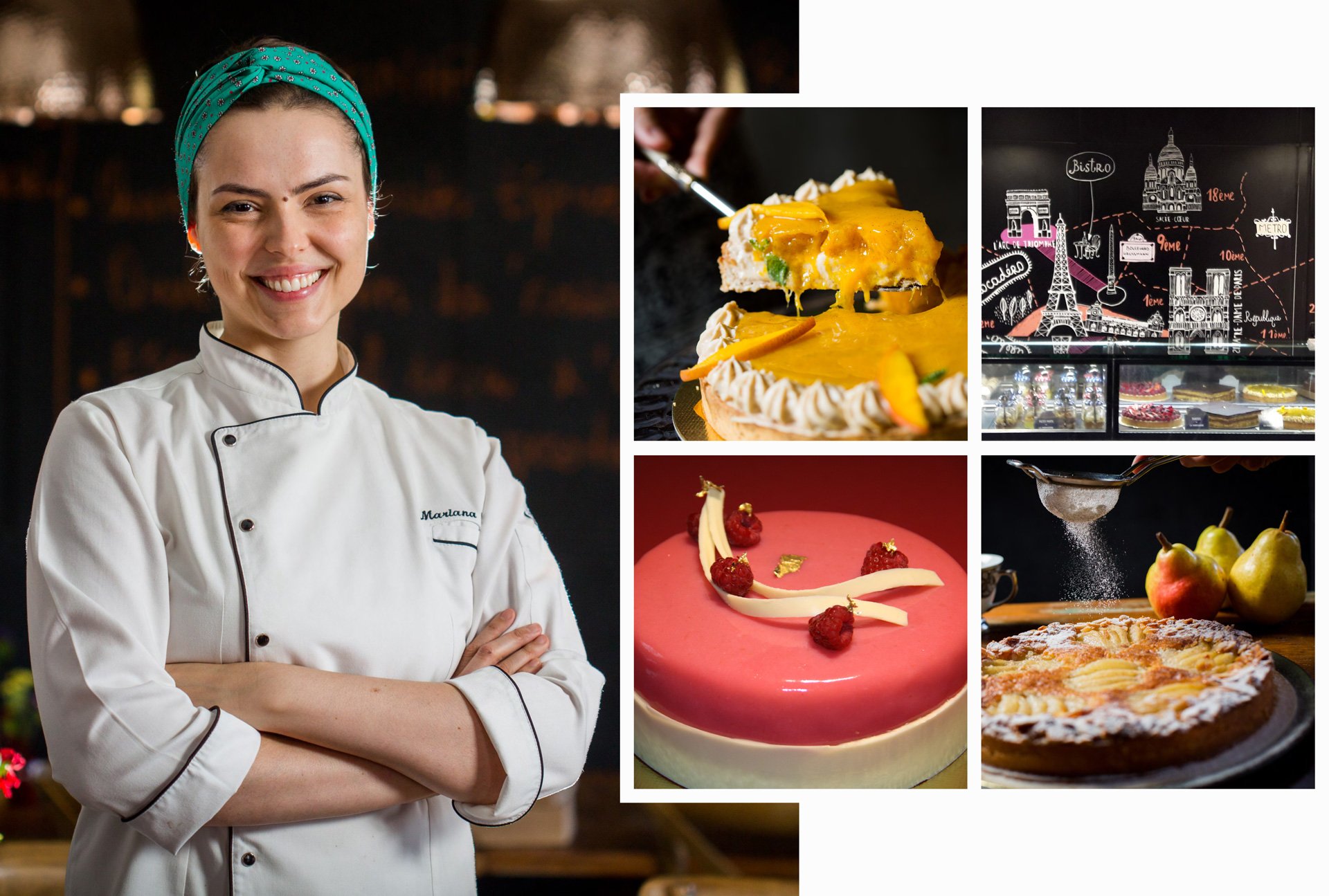 Mariana studied law, but very quickly realized that she did not want to work within that domain, and so began her life project, that of preparing her arrival in France to study at Le Cordon Bleu Paris. In October 2015, following her return to Brazil after completing her Grand Diplôme, she launched a concept of customized pastry production. The success was such that Mariana could no longer ensure all the work alone, and hence began a team adventure, which also marked the opening of a shop "La Parisserie".

I've chosen gastronomy during my law degree studies. After graduation I knew I didn't want to work in the law field, and I immediately started a culinary degree here in Brazil, my home town.

Cooking has always being a pleasure moment for me, especially baking, and making desserts. They were my "escape" or relaxing moment of the day, so why not turn that into my daily job?

When I decided to go on this path I knew I needed to go abroad, experience and learn the culinary bases. I always knew that path would take me to France, so during my culinary degree here in Brazil, I've planned my time in Paris to study at Le Cordon Bleu.

Cooking, it's in my family for generations, not as chefs, or restaurant owners, but on the every day bases. We are a family, like many others, that have a life of sharing moments around a table, and I really love and appreciate those moments. I wanted to make part of these moments in other people’s lives, when they share or eat something made by me. I want them to have great moments around the table like I had and have with my family. If my desserts can do that, I'm truly happy with my work.

The opportunity of living in Paris, the exchange of knowledge and experiences with the Chefs, and students from all around the world. The whole experience was something I'll treasure for life.

Since I've came back from Paris, in December 2013, lots of things happened. I've got a job as a pastry consultant in January 2014 in the best ice cream/coffee shop in my home town. Later on that same month I was hired as their pastry chef.

In February same year I enter Chef's Christhophe Adam's contest contets for a new éclair de genie, "Design moi un éclair de génie". I've got the first prize with my "caipirinha éclair"! I've got the opportunity to work with his team in Paris at L'Eclair de Genie pastry shop in on the Marais, I've met with the chef, and they sold my éclair during the whole month of June at on the pastry shop. It was an amazing experience!

Back in Brazil, I've worked as the ice cream/coffee shop pastry chef till October 2015, when I started my own French pastry brand "La Parisserie". My idea was to bring to my home town the real French pastry, something that we did not have in here till then. But also, to bring my own recipes and ideas, putting my country's flavours to work with the French techniques, and it worked really well!
At On the beginning I worked only by demand, there was were no shop. Little by little my work gained recognition, and people started talking about it, and appreciated it. By Christmas time 2016 I had so many demands that I couldn't handle it by myself anymore. There I decided it was time to have my own place, a little pastry shop, and get a helper.
So I did, and on 22th June of this year, I've opened "La Parisserie" a French pastry atelier. The work by demand it still the primary goal, but now I also have a small and daily production of fresh French pastry products to sell at on the shop, and it has been great! I also started giving some pastry workshops. I hope it remains like that, I'm truly happy and thankful for all the great repercussions.

Where do you live now?

I live at Belo Horizonte, in Minas Gerais State - Brazil. It's my home town.
The Le Cordon Bleu experience and diploma opened opportunities for me here, but mostly because I perused and worked for it. The name of the school and the diploma raise rase eyebrows, but if you don't deliver, you are quickly forgotten. I work every day to deliver excellence in on what I do and to make my time in Paris truly worth it. I study daily, and try to keep on track of the news of on the pastry world. I work from Monday till Saturday, happy and grateful for what I’m in doing. The recognition is happening, but to keep it, it's even harder. That was my choice and I hope I can keep on doing a good work. I'm really happy with my life and choices right now.

Be sure that this is the path you want, for the course it’s a massive investment, and the life work it’s no joke. You really must want this and have in your heart that sacrifices will be made. But, if that is what your heart tells you to do the rewards will come from the hard work, and they feel great!
Study hard, every day, because this job keeps on evolving every day. Otherwise you will be left behind. Don't expect fame, glory, money to come just because you are a "chef", or work on this field, if that’s what you are looking for, you don't know what this is about. Like any other job you must really make it happen by your efforts, and since it’s no easy job, you have to work even harder. Be prepared for anything and good luck!

Right now I really want to focus on the atelier, it’s all really new for me, and I want to do the best job I can. I don't really know what the next step will be, I'm happy with what I've accomplished so far and want to live the moment for now.