Le Cordon Bleu alumnus Kerth Gumbs, the Head Chef at Ormer Mayfair in London joined the school its first ever Summer Festival on June 29th at Bloomsbury Square for a cooking demonstration to deliver the dish: cod & textures of broccoli.

Throughout the years, Kerth has worked with top celebrity chefs such as Tom Aikens and Joël Robuchon, where he opened London’s first L’Atelier de Joël Robuchon restaurant. As well as with some of London’s most successful restaurateurs such as Chris Corbin and Jeremy King.

Following this, Chef Kerth has built a well-establish career for himself, working for Esquina restaurant in Singapore, the five-star Hilton Hotel in London, The Wolseley in London and The Arts Club in London. During these years, he was also involved in various events including charity events and Taste of London, as well as dinners for members of the Royal Family and high-profile celebrities.

Kerth joined Ormer in 2016 where today, he creates restaurant’s the outstanding and luxurious menu. With 15 years of experience, he cites himself as ‘a creative thinker’ regarding the innovative recipes he produces.

Well respected by customers and critics alike, Ormer is considered one of the best fine-dining restaurants in the capital, and was voted as 5th best in London and 14th in the UK by the Harden's top UK restaurant guide.

Throughout the demonstration, Kerth gave guests step-by-step instructions for creating the dish. During the demonstration, guests were able to discuss techniques and ask the Chef questions concerning his career, menus and the culinary industry.

To start, he created a sweet pickling liquid made from water, chardonnay and sugar. A large cod was filleted and salted for 10 minutes, then rolled in clingfilm and left to set.

Broccoli stems was shaved thinly and placed in ice water to curl up, before dicing the stems into cube-sized amounts, and once done, it was added to the pickling liquid. At this point, keeping the broccoli raw, the tender stem broccoli was salted in water until al dente, then plunged straight into ice water.

Broccoli purée was made from chopped broccoli, water, olive oil, unsalted butter, salt, caster sugar and baby spinach leaves. This mixture blended in a food processor until it was a beautiful smooth consistency.

A smoked oyster mayonnaise was created from egg yolks, mustard and vinegars in a food processor and blended for two minutes. Then it was blended again with oysters added, and whilst the motor was running, smoked oil was gradually added to thicken the mayonnaise.

Next, a gnocchi was made, by baking potatoes at 180°C for an hour, and once it was taken out of the oven, it was mashed with egg oil, squid ink and salt. Then in a second mix, parsley flour and parmesan were set aside. On a work surface (or deep bowl), these ingredients were poured in the middle and kneaded together to form a dough. The dough was then rolled into thin logs and cut and shaped into gnocchi.

The gnocchi were blanched in boiling salted water until it floated to the top, then refreshed in ice water, then drained and drizzled with olive oil.

Next sweetcorn kernels were made, followed by confit lemon, and the dish was assembled by arranging the ingredients on three large round bowl plates. All guests thoroughly enjoyed samples of each dish Kerth created.


To see other guest chef demonstrations like this one, visit our culinary conferences and cooking demonstrations page. Or to learn skills like those demonstrated by Kerth Gumbs, why not browse our programmes and courses? 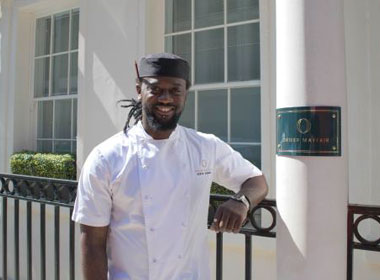 Kerth Gumbs is Head Chef at the acclaimed restaurant, Ormer Mayfair. He graduated from Le Cordon Bleu in 2004, going on to start his career in one of London’s iconic Sir Terence Conran Restaurants. Kerth went on to work for restaurateurs Chris Corbin and Jeremy King, followed by a position at a five-star Hilton Hotel. After 2 years working and travelling in Asia, Kerth returned to London to join Ormer. He now works alongside Michelin starred chef Shaun Rankin and oversees a team of 30 people.