Eco-chef Tom Hunt visited Le Cordon Bleu London to host a climate cuisine demonstration and discussion around sustainability in the food & beverage industry. The event took place on 30th October and featured a fascinating insight into the reduction of food waste, as well as a demonstration of some innovative dishes that demonstrate Tom’s food philosophy.

Tom’s appreciation for food originated from growing up in the countryside. His family kept two goats when he was a young boy, and Tom was given the responsibility of milking them each morning. A few years later he got a job helping on a farm, witnessing practises that drove him to become a vegetarian, which in turn set him on the path to sustainability. During his formative years, Tom worked with Hugh Fearnley-Whittingstall as a course leader, cook and food stylist at River Cottage and on the River Cottage TV series. During this time, he learned a lot about using seasonal ingredients – discovering that there was a wealth of variety available when he stopped relying on out of season imports.

Tom founded his festival café, Poco, in Bristol in 2004, which has now grown into a tapas restaurant. Poco is 100% seasonal, 95% waste free and follows Tom’s Root to Fruit Eating philosophy. Root to Fruit Eating is a holistic approach to food and eating which supports the health of ourselves, the planet and its population. It is based on three core principles: eat for pleasure, eat whole foods and eat the best you can. The three dishes Tom prepared for the packed demonstration room reflected each of these principles.

For the first demonstration, Tom made traditional Soda Bread Farls, using freshly ground emmer wheat flour - milled there and then using a countertop flour mill. This was combined with freshly blended oat milk, cider vinegar and dulce. The dough was then formed into a round, flat shape and divided in four. Tom placed them into a dry pan and cooked until each side was golden brown. The result was a flavoursome, rich bread, with a delicious umami flavour from the dulce. This was served with a drizzle of smoked organic rapeseed oil – and guests where coming back for a second and third taste of the savoury dish.

Tom next created a Cider Vinegar, made using windfall apples gathered near his home, stressing that if one wishes to ‘eat whole foods’ when it comes to fruit and vegetables, it is important to choose organic to avoid any undesirable chemicals. Tom placed the cut apples into a large glass container, adding sugar and water. He then added raw apple cider vinegar to acidify the water and kick start the fermentation process, which takes two to three weeks. Thankfully, guests were able to try some he’d made earlier. The chef added couple of teaspoons of the vinegar to a glass of drinking water, for an invigorating tonic to start the day. Tom also prepared a lemon and rose shrub – a type of sweetened vinegar which can be served like a cordial.

To finish the demonstration, Tom prepared some Water Ganache Chocolate Truffles. This beautifully simple recipe consisted of just four ingredients – water, sea salt, high quality single origin chocolate and cocoa. The water and salt are simmered, then removed from the heat. Chocolate is then added directly into the water and gently stirred until dissolved. The mixture is chilled on a tray until set and finally portioned and dusted with cocoa. Again, Tom had come prepared with some he had made in advance. Guests were guided through a tasting of the chocolate – closing their eyes and pinching their nose before placing the truffle on the tip of the tongue. This sensual method intensifies the flavour experience, and upon releasing your nose one can taste the complexity of the chocolate.

Following the end of the demonstration, Tom encouraged guests to ask questions and open a discussion about sustainable eating. The audience took full advantage of the opportunity to find out more about the fascinating topic.

To see more upcoming guest chef events like this please visit our culinary conferences and demonstrations page. If you want to learn culinary techniques like those demonstrated by Chef Tom Hunt take a look at our programmes and courses and start your culinary journey today. 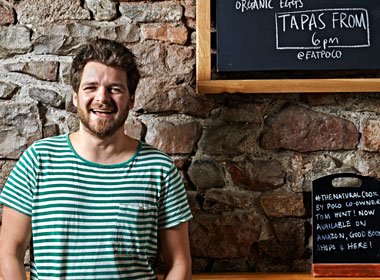 Tom Hunt is an award-winning chef, food writer, climate change activist and author. His work is focused around prioritising people and the environment, protecting biodiversity and raising awareness about the issues affecting our food system. Tom practices Root to Fruit Eating, wasting as little of the food he cooks and eats as possible. Tom founded his Bristol based restaurant, Poco, in 2004. In its opening year Poco was awarded Sustainable Restaurant of the Year by The Sustainable Restaurant Association. Currently based in London, Tom has a weekly food waste column in The Guardian and he also works closely with various charitable organisations including The Fairtrade Foundation as well as with brands dedicated to sustainability such as National Geographic and Sainsbury’s.