On 4th July, Le Cordon Bleu London were joined by Guest Chef Roberto Geraci, the gelato demonstrator and the international consultant at Whiteroom, the technical team of Montebianco Spa, an Italian company, providing semi-finished ingredients for gelato. He is also the owner of Gelateria Gelato D’Autore shop in Rome he launched in 2012, considered as the reference parlour for lovers of quality gelato.

Chef Roberto began his career, in 1994, in the famous Italian confectionery company, Helados Sienna in Madrid, Spain. There, he worked primarily as a demonstrator, alongside being involved in the sales and operations side of the company. He returned to Italy in 2000, to work as a gelato demonstrator for Fabbri, a company that produces ice cream ingredients and recipes for artisan gelato. In 2001, he worked as a gelato demonstrator for Aromitalia, a company based in Italy that produces flavours and fragrances for the confectionery industry.

Guests were given a history background into the art of gelato making and an insight into Chef Roberto’s career and gelato techniques. Gelato can be traced back to 327 years ago, when the first recipe of gelato was published in 1692. Not to be confused with ice cream, gelato differs to ice cream throughout its the ingredients, texture, temperature and process.

Gelato is an artisan food preparation obtained by a mixture of ingredients that is all churned together whilst being frozen rapidly to create a pasty and eatable temperature of generally -8°C to -13°C. The composition of gelato is 58% to 62% of water, 37% to 42% of solids such as sugars, skimmed milk powder or other solids and 25% to 35% of air. Gelato is an artisan dessert as gelato cannot be made in mass production and is made by hand or produced with a batch freezer. It is soft in texture with a cream-like consistency, and unlike ice cream, which is produced in industrial continuous freezers.

Chef Roberto began his three demonstrations and all the ingredients used were brought from Montebianco Spa and were Italian homegrown produce. He began the first demonstration of a mango sorbet, and before Chef Roberto begun, he explained that sorbet is another dessert commonly confused with gelato. It is important to point out that the main differences between the two is that gelato is made from milk, whereas sorbet is water based and fruit based.

For his mango sorbet, he created it with the ingredients: 220 grams of water, 5 grams of lemon juice, 25 grams of dextrose, 500 grams of mango puree and 250 grams of tenace sorbetto, which made it a total of 1000 grams worth of ingredients. Guests were able to have tasters of the dessert that went around for all to enjoy.

In his second demonstration, the gelato cheesecake passion fruit was luxuriously made, with all fresh ingredients. These ingredients were 480 grams of milk, 250 grams of cream cheese, 15 grams of glucose powder, 85 grams of sucrose (sugar), 30 grams of dextrose (sugar), a required amount of passion fruit variegate and 140 grams of new age mix. Chef Roberto explained that the new age mix, brought straight from Montebianco Spa, is a base free of stabilisers and emulsifiers, that is the indispensable ingredient for an extremely high-quality gelato. Chef Roberto made the gelato by hand with a blender, and once it was ready, guests were able to enjoy tasters of the dessert.

For his oriental fusion gelato, with the key ingredients used in the recipe being a variegate oriental fusion of ginger and cinnamon, which are two spices originating from Southeast Asia and South Asia. Also included, were 500 grams of milk, 215 grams of cream, 95 grams of sucrose, 140 grams of newage mix and 50 grams of pasta crema d’Autore. Again, Chef Roberto made the gelato by hand, before guests were able to taste his creation.

To see more upcoming events like this please visit our culinary conferences and demonstrations page. 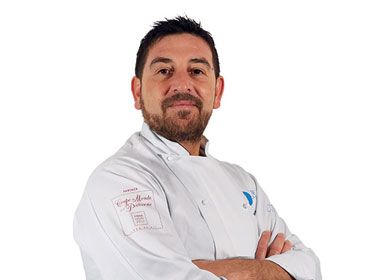 Spanish chef Roberto Geraci is a gelato demonstrator and international consultant at Whiteroom, the technical team of Montebianco Spa, and owns the gelateria Gelato D’Autore shop in Rome. Roberto began his career in Madrid with La Heladeria Sienna, eventually becoming their production manager and in charge of purchasing for the shop. He moved on to the Spanish branch of a well-known Italian confectionery company, before opening the Gelato d'Autore shop in 2012, where he produces artisan gelato, with the best raw materials, the freshest fruit and the most genuine ingredients. In 2015, he started collaborating with Montebianco, where he joined the Whiteroom.