Peruvian born Chef Robert Ortiz is Executive Chef of the Michelin-starred LIMA hosted a culinary demonstration at Le Cordon Bleu’s very first Summer Festival. The event which took place on June 29th at the school in Bloomsbury Square, saw Robert, who is known for being a pioneer of Peruvian cuisine in the London gastronomic scene, teach guests how to deliver two sensational dishes which illustrated his mastery.

Taking it back to the start of Robert’s career which began in Peru’s capital, he worked in the famous restaurant Costa Verde, where he broadened his understanding for his native cuisine’s cooking technique. Robert relocated to London to work at The Landmark Hotel under their talented senior chefs. He later moved on to the Four Seasons, Canary Wharf where he first met Le Cordon Bleu alumnus and fellow Peruvian, Virgilio Martínez. With the focus on European-Latin American cooking, the pair launched LIMA in London in 2012, and with the success of the restaurant, the pair launched the sister restaurant, LIMA Floral in London in 2014.

For the Cod ceviche classic with leche de Tigre, fresh cod was cut into 1cm pieces and placed in a large bowl. The cod trimmings were reserved for later. To create the leche de Tigre, one small white onion was chopped, and blended in a food processor with ginger, garlic and celery. Fish stock and the cod trimmings were added to the food processor to be blended again with all the contents. As this was blended, halfway through, coriander and chillies were added to the food processor to be included all together with the mix. As Robert guided the guests throughout the process for each method, everyone enjoyed tasting the mix at each stage of the blending, to ensure it was just right. The leche de Tigre mix was poured into a bowl and left to macerate for a few minutes.

To serve, the piece of cod was placed on the leche de Tigre, alongside sweet potatoes, lettuce leaves and corn and garnished with red onion slices and coriander leaves. Before moving on to the second dish, guests were able to taste what they had achieved.

The second dish was Hand Dived Scallops, Diversity of Chilly Tiger’s Milk Chia Seeds, a simple yet fabulous dish to make. The process in preparing this was to start by opening the scallops to clean them and to remove the roe. The scallops were rinsed in salted water, then blast chilled at 21°C for seven minutes. Chia seeds were rinsed in cold water and set aside, then scallops were sliced into strips then arrange three slices per plate. The scallops were seasoned with the selection of tiger’s milk, chia seeds and olive oil. To finish the dish off, the scallops was garnished with the avocado, pomegranate seeds and baby cress.

As the demonstration came to a close, guests were able to try the dishes they prepared and were pleased they had learnt some new skills in traditional European-Latin American cooking.


To see other guest chef demonstrations like this one, visit our culinary conferences and cooking demonstrations page. Or to learn skills like those demonstrated by Robert Ortiz, why not browse our programmes and courses? 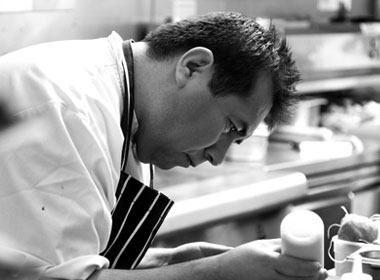 Peruvian chef Robert Ortiz is known for bringing the heady flavours and bright colours of his native country to an appreciative European audience. He started his career at the famous Costa Verde restaurant in Peru’s capital, before moving to London to work in Italian and Spanish restaurants before taking a role at The Landmark Hotel, where he sharpened his talents. Robert moved on to the legendary Four Seasons, Canary Wharf. After moving back to Peru to reacquaint himself with the cuisine, Robert returned to the UK in 2012 when fellow Peruvian chef Virgilio Martínez entrusted him to head up his Lima restaurant in London’s Fitzrovia. In 2014, Lima Floral opened, with Robert Ortiz positioned as Executive Chef of both this new branch and the original Lima London.