Le Cordon Bleu hosted their first ever Summer Festival on June 29th at the institute in Bloomsbury Square. Hosting on the day was Malaysia-born Chef, Ramael Scully, a Le Cordon Bleu alumnus, who delivered a cooking demonstration.

Scully is the Head Chef and Co-Owner of Scully St James’s, based in St James's Market in London, which opened in March 2018, which has quickly gained praise and recognition in London and nationally.

Scully grew up in Sydney with a mother of Chinese/Indian descent and an Irish Balinese father, the Chef’s dishes are inspired by his dual heritage and his travels around the world, including the Middle East, Russia and Europe.

Scully spent several years cooking in Australia until he moved to Britain in 2004 and began working with fellow Le Cordon Bleu alumnus Yotam Ottolenghi and his team in 2005 at The Outpost in Islington. In 2011, he moved to Nopi as Head Chef when the restaurant opened and remained at the helm until 2017. He is also the co-author Nopi: The Cookbook, alongside Yotam Ottolenghi, published in 2015, which was on the NYT bestsellers list, which also resulted in Scully winning an award for the James Beard Award for Cooking from a Professional Point of View in 2016, for the cookbook.

Scully’s dishes are classed as Malaysian, and for in his demonstration, he worked with Malaysian flavours and combinations and taught guests the Asian methods of cooking. This cooking style is complex, as it reflects on the country’s multi-ethnic groups, of which have separate cooking traditions and practices, consisting of South-Asian, East-Asian and Indian. As well as this, his dishes often blend a mixture of other cuisines and cooking styles, such as French, Israeli and Turkish inspired tastes.

Scully demonstrated vegetable acha (mixed vegetables), which is a favourite dish amongst Asians, native to the India, and peanuts, which are commonly used in Malaysian cooking, followed by apple- tomato. He also demonstrated coconut salad, green strawberries, tomato shrub, and to garnish the salad, he made char-grilled broccoli Chinkiang vinegar, salted egg yolk. Vegetable-based dishes like this is characteristic of Scully’s recipes and Malaysian food, as he often cooks with a heavy variety fresh vegetable.

As the demonstration came to a close, guests were able to enjoy samples of what Scully had made. During this time, guests asked Scully any questions they had regarding his techniques, inspiration and what it takes to have a successful career in the industry.


To see other guest chef demonstrations like this one, visit our culinary conferences and cooking demonstrations page. Or to learn skills like those demonstrated by Ramael Scully, why not browse our programmes and courses? 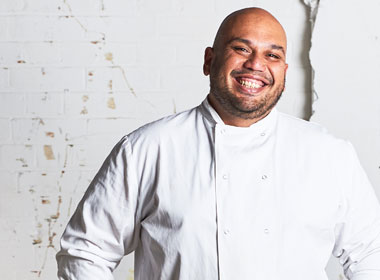 Ramael Scully – or just Scully, as he is known – was born in 1979 in Malaysia. His family moved to Sydney when he was eight where he went to school and then later to catering college. After several years cooking in Australia, in 2005 Scully moved to London and started working at Ottolenghi Upper Street. He moved to Nopi as head chef to open the restaurant in 2011. Scully’s combination of Malaysian flavours, traditional European training and use of Asian ingredients has been the creative force behind much of what is featured on the menu at Nopi. Ramael now runs Scully St James's which is his first solo venture.