Originally from Brazil, Marcia is an alumna of Le Cordon Bleu Paris, where she first enrolled in a one-week Mediterranean cuisine course. As a keen cook she thought she knew what she was doing, but the course opened her eyes to how much she still had to learn. Marcia returned to achieve her Diplôme de Cuisine, having been so impressed by the skills learnt, and the quality of the teaching at the school.

Marcia launched right into her cooking demonstration, preparing the mixture for her chocolate mousse. She whisked egg yolks with a small amount of sugar, whilst melting dark chocolate, double cream and butter in a bain-marie. After more whipping of egg whites and cream, all the ingredients were carefully folded together and refrigerated.

While the dessert chilled, Marcia started her next dish: Flammkuchen, a type of rustic pizza from the Alsace region of France. She started by making a dough using flour, oil and water to form a ball which was then left to rest for thirty minutes. Using some dough she prepared earlier, she rolled out the base, spreading it with crème fraiche and sprinkling with mozzarella. Marcia then added finely sliced white onions which had been soaked in dry white wine for thirty minutes. One guest was curious whether red wine would work, but Marcia advised that the resulting pink colour of the onions may not be as appetizing. 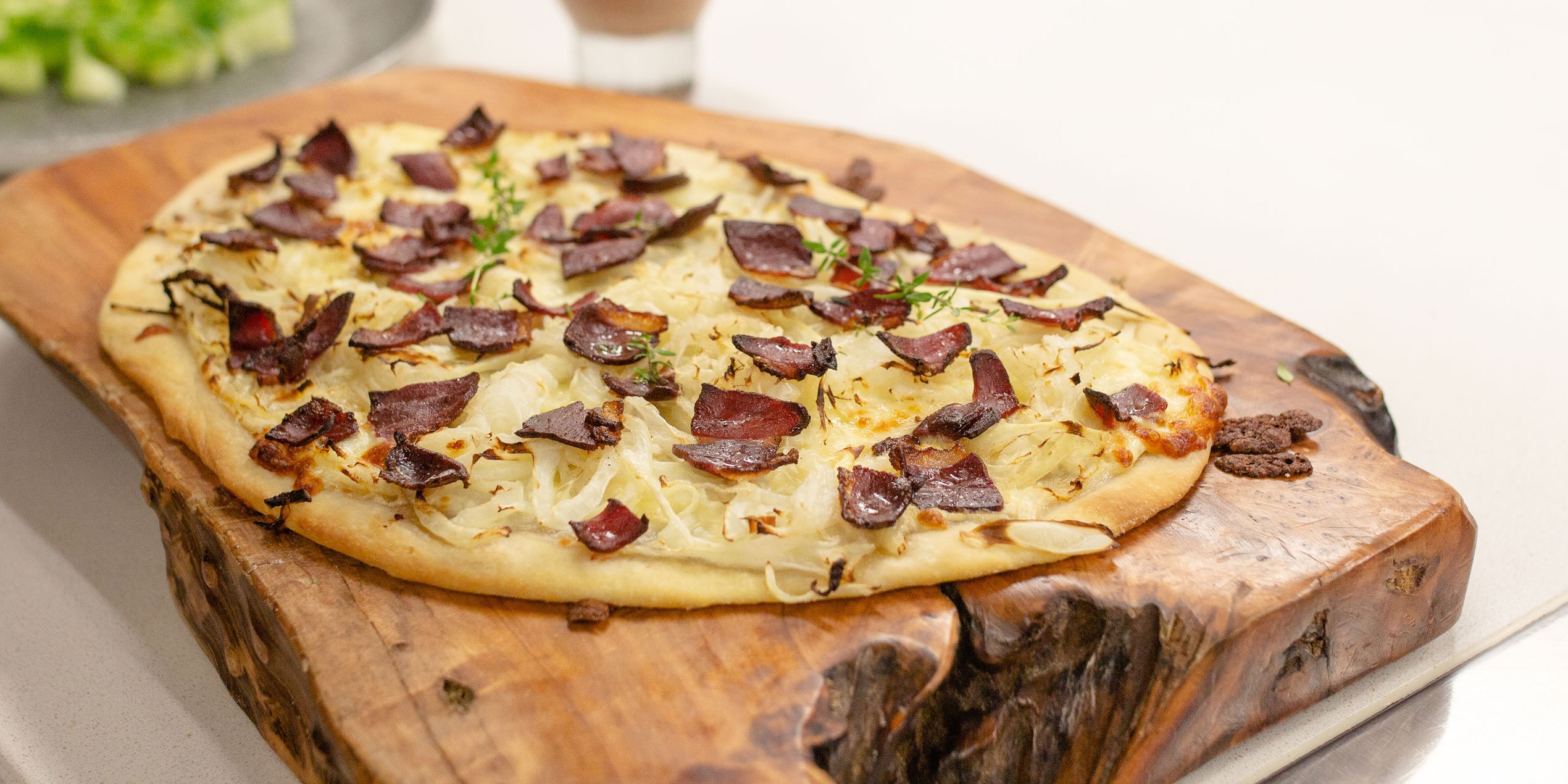 The final ingredient added was sliced smoked duck, which has a bacon-like quality. The pizza was then baked in the oven for ten minutes. Chef Marcia recommended cooking on a pizza stone, but a preheated baking sheet is fine. The cooked pizza was garnished with fresh thyme before generous slices were served to the guests. The flammkuchen was delicious, a lovely balance of creaminess from the crème fraiche and mozzarella, tangy from the onions and umami from the smoked duck.

Her final dish was a fresh cucumber salad with yoghurt and herb dressing. Marcia blended Greek yoghurt with a mixture of herbs, lemon juice and garlic. She then cut cucumber lengthwise into ribbons using a mandolin, which she then fashioned into neat rolls. The dish was served with the dressing spooned onto a plate and the cucumber rolls arranged attractively beside it, with a few sprigs of mint and dill to garnish.

Finally, Marcia served the now set chocolate mousse in a small glass bowl, finished with whipped cream and chocolate shavings. She suggested topping the dessert with a fresh raspberry and edible silver foil to add a little glamour to the dish. The finished dessert was deliciously smooth and decadent.

The guests were ready with questions throughout the demonstration and after, keen for Marcia to give hints and tips for the dishes and general advice.
After the culinary demonstration, Marcia spent some time talking about her life and how she came to write a book on French cuisine. Her husband is German and they have one son, and during the past twenty years, together with her family, Marcia has travelled around the world and lived in many countries, including Brazil, Germany, Portugal, Malaysia and Australia, but it is with France that she identifies herself. Both Marcia and her husband love France and so bought a house in a tiny village in the south of the country, which is where Marcia wrote her book.

Marcia’s final piece of wisdom was that no matter where you’ve come from you must work hard and be humble, and always show respect to your head chef!

If you’d like to follow in Marcia’s footsteps, find out more about the Diplôme de Cuisine or visit our Programmes page to browse all our courses.

Marcia Öchsner is a Brazilian chef and author who draws inpiration for her cooking from her travels around the world. She has experience in various restaurants as well as teaching. Cooking in her kitchen in the south of France is her passion and she does it often between long walks.
Marcia is married with one son, and her food philosophy is to make dishes that she enjoys cooking, and that her family enjoy eating. Her debut cookery book, Cooking in the South of France, is available to buy online.
TOP
TOP
Le Cordon Bleu
Corporate
Boutique
Portals
Le Cordon Bleu London
15 Bloomsbury Square
London ,  WC1A2LS
United Kingdom
+44 (0)20 7400 3900
+44 (0)20 7400 3901
Facebook
Twitter
Instagram
YouTube
Pinterest
LinkedIn
Google+
Blogs
Campuses in Europe
Campuses in The Americas
Campuses in Oceania
Campuses in Asia
Le Cordon Bleu International