On 16th July, Le Cordon Bleu London were joined by the Executive Chef of El Mural de los Poblanos, Liz Galicia, for a culinary demonstration of mole poblano; one of the dishes considered most representative of traditional Mexican cuisine.

The Mexican chef opened the evening by introducing herself, providing details of her restaurant and the history of the authentic Mexican mole poblano sauce. During this, guests were given the opportunity to ask questions.

Chef Liz was born and raised in Puebla, Mexico, a state known for its culinary history and the first Spanish-built city in Mexico. Liz studied in her hometown at the Swiss Institute of Gastronomy and Hospitality. Following graduating in 2008, she gained work experience in various restaurants and hotels in Mexico. She opened El Mural de los Poblanos in 2010, considered the best restaurant in Mexico by the 120 Guide “México Gastronómico” and is a member of Treasures of Puebla and Slow Food. From the investigation of the Mexican culinary culture, Chef Liz Galicia interprets the recipes of authentic poblano cuisine and presents them with fidelity and loyalty towards the product, but also with avant-garde.

“Unfortunately, many Mexicans no longer make authentic poblano cuisine due to it being so time-consuming. People want to preserve culture and the restaurant receives people from all over Mexico who come specifically there to eat traditional cuisine. No changes have been made to the menu since opening. We don’t want to lose history.”

What is mole poblano? It is Mexico’s classic, ancient sauce which dates to the 19th century, and is infused with indigenous and European cultures. While many Mexican dishes have changed throughout the centuries, mole poblano is one notable exception. Traditionally, making the dish was a ritual and was made when there was a gathering of people or when introducing people to a new religion. Nowadays it is a very popular dish for any event or celebration.

The word mole comes from the old Aztec (Nahuatl) word mulli (to grind), or sauce. Mole exclusively is used with fresh ingreidents and the recipe is based on corn, tomato, chiles and Mesoamerican herbs with pre-Hispanic techniques, which was before the Spanish–Mexica War, the Spanish colonization of North and South America. These recipes are now today combined with ingredients brought to the new world by the Europeans. The mole recipe has a list of around twenty ingredients, which include the main ingredients of the dish: chocolates, nuts and sugars. Each ingredient is made individually because all has different cooking times. Each family has their own ingredients and way of making the dish and it can be served in several ways; including with rice, on enchiladas and with breakfast foods such as eggs.

For the demonstration, Chef Liz made a chicken mole poblano, which is a popular choice of meat used for the sauce today. For this, a poblano paste was made and she started by removing all the seeds from the chillies and toasted in the oven, moving them continually, before toasting them in a direct flame. The tomatoes were dry roasted alongside the garlic and onion. Next, the almonds, peanuts, plantain and raisins were fried in hot oil in a medium heat, following dry roasting the cinnamon, cloves and sesame seeds. Once these ingredients were cooked, they were all placed in a pan with water to boil until they turned soft, before the ingredients were grinded together until the mixture became a paste. Finally, the poblano paste was fried in lard until it reached a temperature of 60°C, which approximately took 30 minutes to do so, while stirring constantly so that it didn’t burn. Once the poblano paste was cooked, Chef Liz removed the poblano paste from the pan and put it in a container and left it to cool down. When it comes to taste, no flavour of ingredient should outweigh the other, all flavours should be balanced and combined.

Next, Chef Liz started preparing the chicken mole poblano by putting the mole paste in a casserole with chicken broth and powdered chicken concentrate in a pot, adding sugar and a small amount of water to this. This was mixed well constantly with a balloon whisk until there were no lumps whilst being cooked for 20 minutes over a low heat. Chef Liz then added shredded, cooked chicken breast to the pot and once done, she served on corn tostadas and sprinkle over toasted sesame seeds. Guests enjoyed the exceptional Mexican dish and many asked for a second serving.

See more upcoming guest chef events like this on our culinary conferences and cooking demonstrations page. 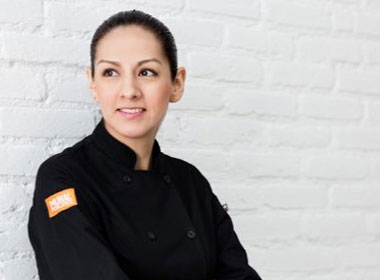 Liz Galicia is originally from Puebla, Mexico. She graduated from the Swiss Institute of Gastronomy and Hospitality in 2008. In 2010 she joined El Mural de los Poblanos restaurant as Executive Chef. Liz has dedicated a lot of her time to collecting and interpreting the recipes of authentic Puebla cuisine. Liz uses traditional methods in the preparation of her dishes and promotes the use of local ingredients. Prestigious publications have recognised El Mural de los Poblanos as one of the best restaurants in Mexico, and in addition to her work at the restaurant, Chef Galicia participates regularly in the most prestigious food festivals in Mexico and the United States.