We were joined by Zuma Group's Executive Pastry Chef Julien Philippe for an evening focusing on the Japanese cuisine that Zuma's restaurants are best known for. With experience in various hotels and restaurants, Julien first joined Zuma Group as Pastry Chef in 2004 for the opening of Roka in London. Since then, he's been there for launch of three further Rokas in London, Oblix at the Shard and Zuma restaurants in Istanbul, Miami, Abu Dhabi, NYC, Las Vegas and Rome, as well as the more recent addition of INKO NITO in LA and London.

One technique that Chef Julien is particularly known for is his use of moulds to create exceptional, playful desserts that taste as incredible as they appear. Focusing on this technique in particular, Julien began the demo explaining how the moulds are made, and perhaps more importantly, the purpose of a particular mould. Moulds of loads of different things can be created, but the aim is to create a memorable experience for the customer, so it needs to suit the theme of the restaurant and the menu. For this demonstration, Julien used a fresh truffle to create a multiple silicon replicas which are then used to create many moulds, displaying how this process works in practice when upscaled to a restaurant environment.

With the moulds created, Julien began work on the filling for the mould, which consists of cremeux guanaja and caramel mousse. While this sets in a blast chiller, Julien sets to work on the crumble, chocolate sauce and coffee & miso ice cream. Adding this popular Japanese flavour compliments the coffee well, with the light coloured Saikyo miso adding sweetness to counter the coffee's bitterness. Julien makes this ice cream completely vegan, using high grade soy milk and dark chocolate as replacements for the traditional dairy milk that's more commonly used.

By using high quality ingredients, the Executive Pastry Chef's aim is to improve and make a better ice cream, rather than seeing it as sacrificing the more traditional ingredients; as a result, all ice creams in the restaurants are vegan. Constructing the dish, Julien pours a small bit of Japanese Whisky on the crumb to add another dimension to the flavour, before lastly adding some shavings of fresh truffle to really bring the theme of the dish together. 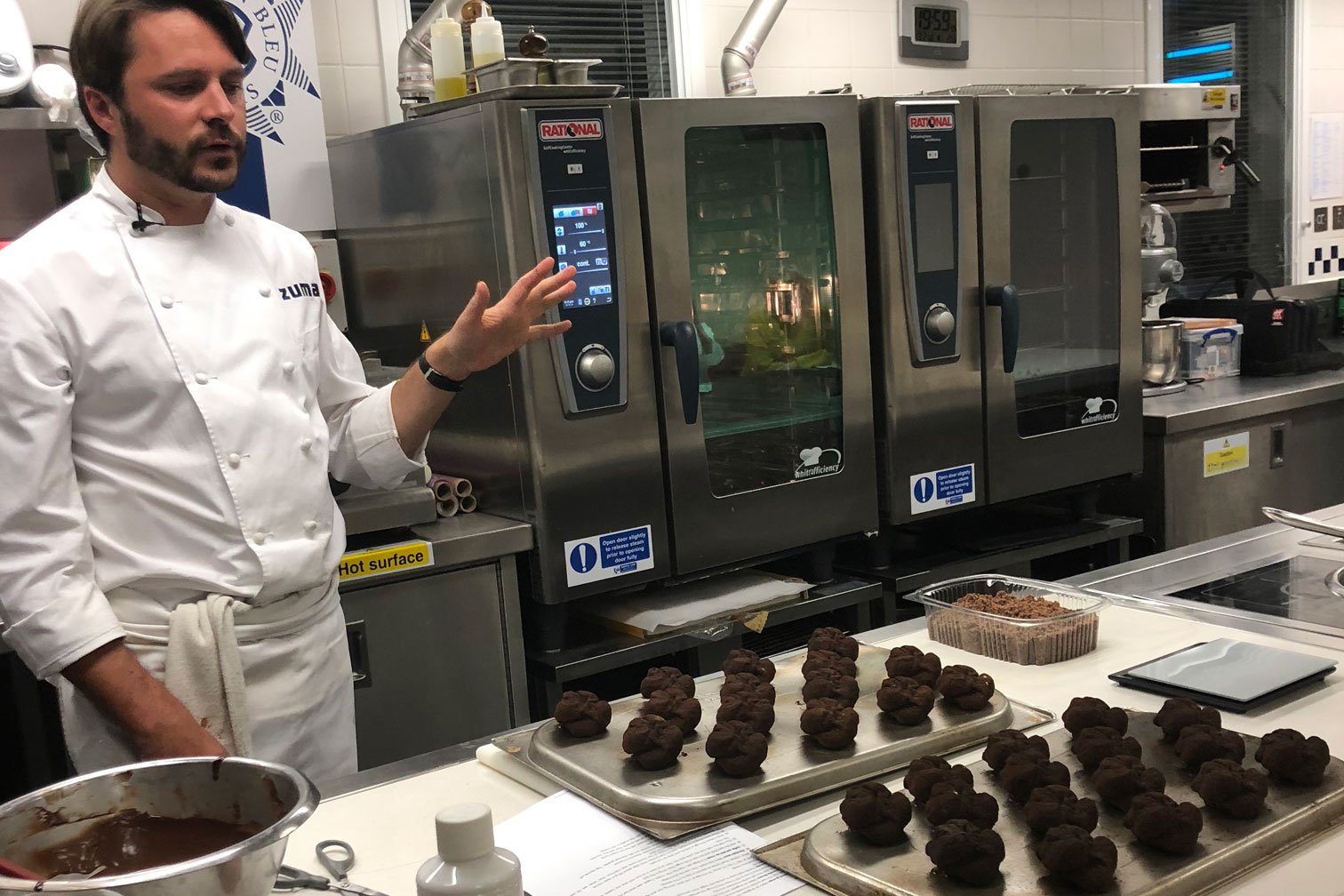 The whole of the Zuma groups dishes represent a very natural feel which is apparent throughout its restaurants, inspired by traditional Japanese styles and production methods; each of their plates and dishes are made in Japan specifically for the group. This plating perfectly suits the clever idea behind the dish, presenting what appears to be a fresh truffle in soil (crumb) akin to it's natural environment, but when the 'truffle' is cut into it is clearly closer to a chocolate truffle than a wild growing funghi. This imaginative dish is perfectly executed from inception to creation, to plating, and this wouldn't be possible without the use of the mould. 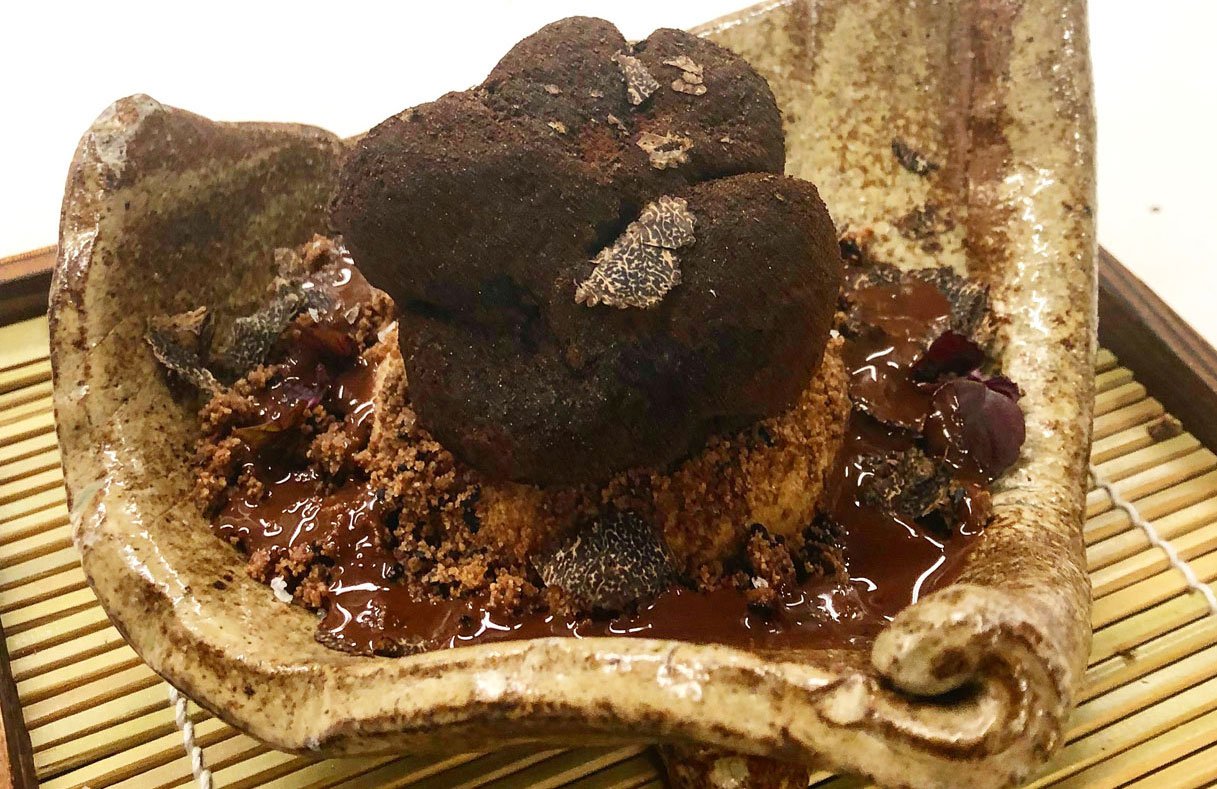 To close the evening, Chef Julien took further questions from the audience while they enjoyed their taster of the finished product. When asked of his menu conception and process, Julien revealed that a great deal of trial and error is required when making these time consuming dishes as there are many stages in which issues can develop. The concept of the end product also needs to be considered and Julien was quick to put emphasis on the overall aim and what exactly the moulded item brings to the dish. 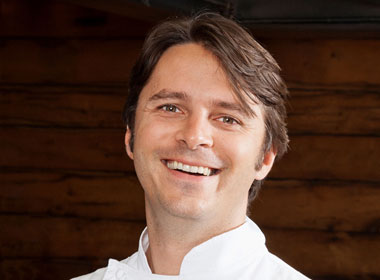 
After graduating from BTS Hotellerie in Bordeaux, France in 1997, Julien relocated to England where he began working in the hospiality industry at various locations across the country. Joining the Zuma group in 2004, Julien helped launch the first ever Roka on Charlotte Street in London's Fitzrovia, and was soon promoted to Executive Pastry Chef for the Zuma group. In this role, he has headed up the pastry department for every subsequent restaurant opening, training chefs and designing menus before moving on to the next new opening in this rapidly expanding group. In his time at the Zuma group, Chef Julien has travelled around the world to cities such as Istanbul, New York, Abu Dhabi, Rome and London, working across all the group's brands: Zuma, Roka, Oblix and INKO NITO.