On 2nd March, we were joined by acclaimed Irish chef, Jp McMahon for a unique guest chef demonstration in celebration of the release of his new book, The Irish Cookbook (Phaidon).

Chef Jp brought a wonderful array of Irish ingredients to use in his demonstration. His book, which took him three years to complete, aims to celebrate the lesser known cuisine of Ireland. At his restaurant, Aniar, they started out by only using ingredients that are found in Ireland. This understandably set limitations, and meant they had to adjust their way of approaching a dish.

When first approached to write a cookery book, Jp revealed he wasn’t sure there was anything different he could bring to a market already full of Irish cookbooks. Eventually he realised he could revive the forgotten foods of the country that died out once imported produce was made more available. Jp’s book focuses on the wealth of produce he can farm, gather and forage from the land around him. He admits that not all of the dishes could be considered authentically Irish, but if they were created in Ireland and that’s enough for him to consider it so.

Jp cooked three dishes; Lamb chops with rye and razor clams, Hay baked celeriac with winter chanterelles and seaweed broth and Monkfish with wild garlic. Each dish featured seasonal foraged ingredients, some of which Jp had gathered that morning before leaving Galway for London.

Jp explained that at his restaurant he tries to utilise native ingredients rather than using exported ingredients, meaning that things such as lemons were of the menu. He demonstrated how he gets acidity, a quality we often neglect in western cooking, into his dishes using vinegar instead, and he tends to use oil, vinegar and sea salt to season his dishes.

For his Monkfish dish, Jp seared one side of the fish in a pan with butter. Jp took this moment to stress that he only sears one side of the fish, and most people’s habit of searing fish and meat on all sides is unnecessary. He advised that people often cook on autopilot, doing things because they always have done and that it’s good to question things and shake up how you do things.

After presenting three beautifully plated dishes, Jp signed off with the hope that guests would leave with an appreciation for the possibilities of Irish cooking. Considering the number of guests who left with a signed copy of Jp’s book, there are definitely some converts to Jp’s way of cooking, and we’re sure his charisma and humour helped.

Find out how you can learn techniques like those used by Jp by visiting our cuisine programmes page. 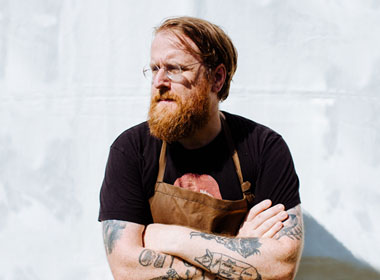 Jp McMahon is a chef, restaurateur, author, food educator and food thought leader based in Galway, Ireland. The Michelin-starred Aniar Restaurant has retained it's star each year since first being awarded the honour in 2013. The group's Tartare Café + Wine Bar also received a Michelin honour, with a Guide Bib Gourmand awarded in 2019 and 2020. Jp also runs Aniar Boutique Cookery School, based at its namesake restaurant. Jp is the Symposium Director for the two-day, global food convention Food On The Edge, taking place annually in Galway City, Ireland, since 2015. He also writes a weekly column for The Irish Times.