Jonas started his career with three years as an apprentice before landing a position as Commis Chef at a Five Star Hotel, with a one Michelin-starred restaurant in his native Germany. He undertook a further two year’s pastry apprenticeship whilst there, resulting in his promotion to Chef de Partie.

After spending time travelling and gaining experience around the world, Jonas landed his current job as Head Pastry Chef for the one Michelin-starred restaurant at Coworth Park.

The demonstration room was packed with guests keen to see Chef Jonas at work. His demonstration focussed on the classic St. Honoré cake, named for the French patron saint of bakers and pastry chefs. Jonas’ version of the St. Honoré features a decadent combination of choux pastry, craquelin, caramel sauce, ganache, puff pastry and cream assembled into an elegant structure. He made several different versions of the dessert throughout the evening, demonstrating the versatility of the dish.

At Coworth Park, located in scenic Ascot, guests are looking for a calm and peaceful experience, and lots of comfort food. This kind of classic dessert is perfect, as it can be served in a number of different ways, from buffet style to individual dessert portions. Chef Jonas likes to use a lot of cream and caramel in his dishes and isn’t keen on sacrificing flavour for fewer calories. Pastry is an occasional treat so why not indulge in the best ingredients.

Jonas discussed how important it is to take your time when choosing your first chef job. And once you’ve found the right one to be loyal, work hard and climb the ladder slowly so you can learn the most from the chefs who mentor you. He is passionate about nurturing the young chefs he works with and gets a great sense of pleasure seeing them develop and grow their skill.

If you are interested in learning pastry skills like those demonstrated by Chef Jonas Plangger, you can view our range of pâtisserie courses here. 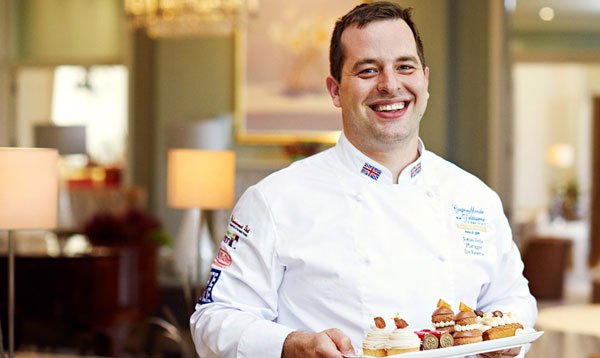 Jonas started as an apprentice before starting his career working in Michelin-starred restaurants. He spent time broadening his portfolio in high-value venues before joining the team at the one Michelin-starred restaurant at Coworth Park. When commitments allow he competes in professional competitions and has been called upon as a reserve to the England National Pastry Team.