On 23rd January alumna Ghillie Basan joined us at Le Cordon Bleu London to talk about her experiences living remotely in the Scottish Highlands, and provide a demonstration on pairing food with whisky.

Ghillie is an adventurer at heart and finds herself most at home in a wild, panoramic landscape. She knew a conventional job would not quench her thirst for adventure, so she moved to Scotland with her husband after finding a run-down building in the Highlands that was perfect for their needs.

Living so far off the beaten track presented challenges of course. Still living in this now restored building today, Ghillie reminisced of the struggles she faced when creating her first cookbook without any electricity. She would step outside with a reflective surface, waiting for the clouds to clear just to reflect the light of the sun onto the page so that her husband could photograph the food.

Ghillie began the demonstration by serving a dram of The Glenlivet’s Captain’s Reserve whisky for each of the guests. The whisky is matured in cognac barrels, adding further richness and depth of flavour. Whisky in hand, the guests enjoyed a short video Ghillie developed with Wilderness Scotland as part of a series called Women in the Wild.

After this Ghillie discussed how she entered the culinary industry with cookbooks, but that she is most at home when preparing foraged, caught or hunted food over open flame in the wilderness. Keen to establish exactly how sustainable and zero-waste people can be, Ghillie discussed how when at home they forage their food, build their own shelters and even craft their own spoons and cutlery from wood.

On the subject of borderline survival skills, she discussed the power of just using a wok, which can be turned upside down making it perfect if creating a crepe or similar pancake type dish such as a Sri Lankan hopper. Choosing to cook over open flame as much as possible, Ghillie even resorts to cooking eggs and other ingredients on a shovel, utilising its tough material to replicate a large pan – also uesful to keep yourself away from the flames thanks to its lengthy handle.

As Chef Anthony Boyd assisted with the preparation of the food, which was paired with the whisky, Ghillie discussed her process of pairing a whisky with a certain food. Pernod Ricard asked her to create food pairings for their global campaign promoting The Glenlivet’s Captain’s Reserve. The texture and mouthfeel (the creaminess) of the whisky works perfectly with some Turkish and Middle Eastern flavours, such as harissa and rose petals, which come through beautifully following the whisky’s initial taste.

After the demonstration, guests were free to ask questions and Ghillie had brought along a variety of her books, including her newest, Spirit & Spice, in which Ghillie has used her knowledge of spice cookery to shine a new light on local Scottish ingredients. It also opens up whole new worlds of flavour with her approach to food and whisky pairings. With signed copies of the book in hand, guests enjoyed sharing the remainder of the whisky and canapes, with Ghillie answering their questions, drawing on her incredible adventures.

Inspired by Ghillie adventures? To follow in Ghillie's footsteps, take the first step by visiting our programmes page, or to see other upcoming guest chef demonstrations like this, please visit our culinary conferences and demonstrations page. 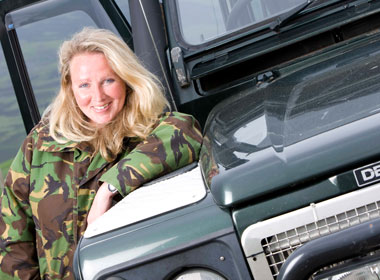 Ghillie is a writer, broadcaster, and food anthropologist who lives off the beaten track in the Scottish Highlands. She grew up in East Africa before moving to boarding school in Scotland, followed by achieving a Diploma a Le Cordon Bleu London. Her internationally acclaimed books have been nominated for the Glenfiddich Award, Guild of Food Writers Award and the Le Cordon Bleu World Food Media Award.