Le Cordon Bleu London were joined by world-renowned Chef and restaurateur Enrique Olvera on the 26th March for a Q&A and book signing, celebrating the launch of his new cookbook Tu Casa Mi Casa published by Phaidon.

Born in Oaxaca, Mexico City in 1976, Chef Enrique plays homage to his hometown by celebrating truly authentic Mexican cuisine and introducing it to the world. As a result, many consider Enrique to be an ambassador, whose dishes are not only beautiful and eye-catching, but they tell the story of the history and lifestyle of Mexico.

To open the evening, all guests were given a signed copy of Tu Casa Mi Casa, and available for purchase on display was his book Mexico from the Inside Out. Accompanying Enrique in Q & A was food writer Ed Smith, from Rocket & Squash, who discussed with Enrique the message behind his heart-felt food. Tu Casa Mi Casa is Enrique's voice of experience teaching us all we want to know, in order to create the recipes that we want to cook. Mexican cooking has become a novelty, but Enrique wants to introduce authentic home cooking made easily accessible to all through the recipes in his book. The book covers the basics of weekday dinners and food to share in a system which unites all the regional Mexican cuisines.

During the session, the audience’s questions were answered and Enrique provided in-depth responses, detailing his life story and his cooking methods. He told the audience that when you cook, the focus should always be on the message and the process, not the result. If the process is good, the result will be good. But what makes cuisine authentic?

“Being authentic means being honest to the community, what the community grows and being knowledgeable of that. Your background has a huge impact on how you cook. It's important, you need to understand this to understand how Mexican cuisine works.”

The award-winning chef grew up in Oaxaca, known for its food. Growing up, he was surrounded by home-cooks and food markets, where various areas of Mexico cooked very differently, without rules or a correct way to cook. In Mexico, how you eat in one place to another is drastically different. For example, there’s no right way of making tortillas because in Oaxaca they are extremely thin, but can be thick in other Mexican regions. The cooks in Mexico follow their intuition when selecting the ingredients, all of which are locally sourced, fresh from the market and certainly not imported.

When Enrique began training as a chef, he was taught the techniques of European cuisine, but it did not apply to Mexican food. Enrique gave the example of a charred potato: in Europe, it is not desirable, whereas in Mexico, is it preferred. This can therefore result in authentic Mexican food often being misunderstood.

The secret behind his great tasting cuisine is healthy produce and the quality of soil is in direct relation to flavour. To make the perfect tasting guacamole, an avocado grown on healthy soil will be tasty; consequently, flavour is in relation to health not delicacy. Fundamental flavour is in the plants maturity, so a good avocado needs to mature well, remaining part of the plant so that when it is picked, it's a perfect. Enrique enjoys using the whole plant for his cooking. He uses the avocado leaves which are richer in flavour and produce a special scent. In Mexico, there are many different kinds of avocados: some are wild with edible skin, others come in many shapes and sizes. The most used avocado globally is the heart avocado which is also the most geographically wide spread.

Mexican food is known for its heavy use of chillies, and Enrique explains how he layers different kinds of chilli in many of the dishes featured in the book: he uses fresh green chilli that has grassy notes and then dry chipotle for seasoning in some dishes. Corn is another key ingredient used in many Mexican recipes, as it has so much potential. Corn can be grouped into different families and has than 28,000 different varieties.

Enrique’s unique approach to cultural cuisine requires that the cook must have lived and experienced life in that country in order to cook and produce the food to the required standard. Mexican cooking is much related to home and many of his recipes are heartfelt and attached to so many memories. As the discussion ended, guests were able to try authentic tortillas, guacamole and hummus which were prepared by Chef Enrique shortly before the event. Guests were then invited to meet Chef Enrique for a photo and signing of their book, providing a fantastic memory and a souvenir of the evening with one of the greatest chefs in a generation. 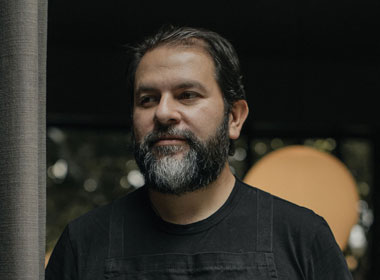 Enrique shot to prominence in 2000 with the opening of his restaurant based in Mexico City, Pujol, which is consider as one of the best in the world, with the 2018 S. Pellegrino World's 50 Best Restaurants placing Pujol at no. 13. Progressing his impressive career, Enrique also expanded internationally to great acclaim, with his New York based restaurant Cosme ranked at no. 25 on the same list.

The award winning chef has also featured on Netflix's critically-acclaimed series 'Chef's Table', as well as judging on the international culinary competition show 'The Final Table'.