Asma Khan, the Founder of the Darjeeling Express restaurant, hosted a culinary demonstration at Le Cordon Bleu’s first Summer Festival on June 29th. The demonstration took place at the institute based in Bloomsbury Square. In the demonstration, Asma demonstrated kaju aloo (potatoes with cashew nuts) with saffron chicken, to teach guests the techniques and methods for preparing traditional Indian cuisine.

Originally from Kolkata in India, her inspirational for her dishes are inspired by her heritage, as she delivers traditional Indian cuisine, containing the staple Indian herbs and spices.

Asma’s passion for cooking caused her to begin a life as a supper club owner in her home in Kensington in 2012. In 2015, she moved on to open a Darjeeling Express pop-up café in Soho, London, and to much acclaim, Asma opened the Darjeeling Express restaurant in 2017 in London.

In 2018, Asma released her own cookbook Asma’s Indian Kitchen, which was listed in the ‘20 Best New Cookbook of 2018’ by Indy Best, The Independent. In 2018, she was voted ‘Female Entrepreneur of the Year’ at the Asian Restaurant Awards. In 2019, Asma became the first British Chef to feature in the Emmy nominated Netflix Chef’s Table.

During the demonstration, guests were given step-by-step instructions to follow Asma’s culinary techniques, so that they could replicate themselves at home. During this, guests were given the chance to discuss Indian cuisine, her life and career as a chef and the ideas behind the creation of her menus.

The kaju aloo dish is a traditional, popular Indian recipe which is a delicious curry dish, usually served as an everyday food as well as on special occasions.

It is usually made with fried potatoes, whereas in this demonstration, Asma boiled the large white potatoes before cutting them into cubes.

Staying true to tradition, the kaju aloo featured all the traditional herbs and spices commonly used in preparation, such as chilli and ginger paste, curry leaves, cashew nuts, chia seeds, turmeric powder, salt and onions. The recipe is simple to make yet these ingredients brings a complex and wonderful end-result.

A crispy saffron chicken (using chicken thighs) was served alongside the dish, and this dish originates from the Northern region of India and is another popular recipe. Asma incorporated saffron-infused stock in the cooking process, which gave it a distinctive, sweet aroma and taste.

Throughout the event, all guests tucked into samples of the dishes Asma prepared to get a true - and very literal - taste for Asma's Indian cooking.


To see other guest chef demonstrations like this one, visit our culinary conferences and cooking demonstrations page. Or to learn skills like those demonstrated by Asma Khan, why not browse our programmes and courses? 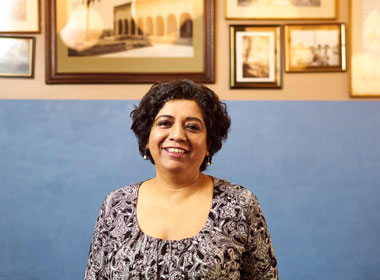 Asma Khan is an award-winning British chef known for her central London restaurant, Darjeeling Express. Asma moved from Calcutta to Cambridge in 1991. She started a supper club at her home in Kensington in 2012, eventually registering for a food business. In 2015, she opened a pop-up in Soho to much acclaim, and Darjeeling Express the restaurant opened its doors in June 2017 in Kingly Court, Carnaby. Her debut cookbook “Asma’s Indian Kitchen” was published by Pavilion on 4th October 2018, and in 2019, Asma was the first British chef to be featured on Netflix docuseries, Chef’s Table.