On 20th February Le Cordon Bleu London were joined by alumna Anna Krasovskaia for a pâtisserie demonstration. Anna is an internationally renowned pastry chef, award winning author and she runs her own pâtisserie in St. Petersburg.

This is Anna's second culinary demonstration for Le Cordon Bleu London. This time Chef Anna demonstrated how to make one of the beautifully whimsical desserts from her recent Alice in Wonderland inspired collection from her shop. The Flamingo Dessert consisted of layered sponge, baked cheesecake and strawberry jelly coated in vanilla mousse and ruby chocolate.

Anna first decided to come to Le Cordon Bleu London to perfect her pastry skills by learning classic French techniques. After graduating in 2015 with a Diplôme de Pâtisserie, Anna returned to Russia and opened her pâtisserie, Confectionary Anna Krasovskaia, in 2018. The shop features an open cake decorating studio, production kitchen and small café.

Anna started her demonstration by making the mousse, combining white chocolate, gelatine, cream and vanilla beans before refrigerating. Once cooled the mousse is whipped and put into a heart shaped mould, followed by the jelly, cheesecake and sponge, before leaving to further set in the freezer.

When asked about what inspires her creations, Anna said she finds inspiration everywhere; books, art, music, nature. Her collections have been based on seasonal holidays, fashion and famous works of art to name a few. Anna admits that she couldn’t work for anyone other than herself and she enjoys the creative freedom owning her own business brings. She advised that it’s important not to try and do everything though, and as she wanted to remain in the kitchen, she has a partner who manages the business so she can focus on the culinary side.

The guests were keen to get a closer look at the finished elegant pink dessert and to ask Anna questions about her creative process.

Visit our pâtisserie courses page to find out how you could learn skills like the ones demonstrated by Anna. 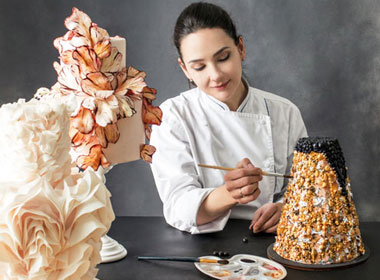 Author of the award-winning Fashion Cakes, Anna has become internationally recognised as creator of some of the most beautiful cakes in the world, baking for stars such as Antonio Banderas and Mick Jagger. Also the host of a popular YouTube channel on confectionery art, Anna graduated from Le Cordon Bleu London in 2015 having moved to London from St.Petersburg. Now back in Russia, her first pâtisserie - which includes an open cake decorating studio, production kitchen and small cafe - opened in 2018: Confectionary Anna Krasovskaia.
Anna Krasovskaia also returned to Le Cordon Bleu London for a guest chef demonstration on 19th February 2019, creating her show-stopping cakes for students and guests.