On the 29th of June, Founder of The Modern Pantry, Anna Hansen MBE hosted a cooking demonstration at Le Cordon Bleu’s first Summer Festival in Bloomsbury Square in their state-of-the-art kitchens.

The demonstration saw the chef, best known for her collection of experimental, global fusion-food, teach guests how to create Singapore Style Wokked Crab which was inspired by Southeast Asia culture and cuisine. Guests were given practical information on the skills and techniques used throughout Anna’s successful career.

The Canadian born, New Zealand raised Chef’s calling began when she moved to London aged 22. Here is where she was first introduced to the culinary world at The French House, Soho, working as a kitchen porter. Under the training and mentorship of Chefs Fergus and Margot Henderson, Anna eventually advanced to position of Head Chef.

Anna moved on to work as Sous Chef in Green Street restaurant with Chef Peter Gordon, following working as Pastry Chef in the Sugar Club. Herself and Gordon opened The Providores where she worked for four years before leaving in 2005.

In 2012, Anna was appointed as a Member of the Order of the British Empire (MBE) recognising her as being one of the few female chefs to have left a mark on the London dining scene.

For Anna’s demonstration, the dish started off with live crabs being put in the freezer for two hours before being ready to cook them. Once the crabs were out of the freezer, guests were ready to begin their preparations. Each guest placed their crabs in a pan to boil in water, adding sea salt, prawn vegetable stock, Thai basil leaves, 4 sliced spring onions, sliced green chilli, and finely coriander leaves.

After boiling the crabs, they were left to simmer down for 20 minutes, before each guest poured the contents of the pan carefully into the sink, the crabs with refreshed with cool water to stop the cooking process.

Once the crabs were completely cool, all the claws were broken off to avoid shards of shell being left on the crab, allowing the end-result to be as flawless as possible. The body crabs were cut into quarters with the legs still attached.

A frying paste was created from fresh ginger, garlic, shallots, chillies, Szechuan peppercorns and vegetable oil blended in a food processor until the paste was completely smooth.

Next, a sauce was created from light soy sauce, lime juice, fish sauce, smoked chilli Sambal, tomato relish and light palm sugar. These ingredients were whisked together and heated in the oven at 180°C. Vegetable oil was heated in a wok with the frying paste and left to sizzle for a couple of minutes.

Moving back to the paste in the frying pan, the crab pieces were gently tossed inside until they were evenly coated in the paste, then heated through for around 5 minutes. The sauce and the stock were added to the frying pan that contained the crab pieces and paste. Once this sauce reduced and little, dish was ready to be served.

To assemble on the plate, the crab was placed in a large bowl with the body shells on top for decoration. Thai basil, spring onions, chilli and coriander was scattered on top and ready to be served. Before the guests left the demonstration, they all delighted in samples of the acclaimed chef's creations. With this new summer-perfect recipe under their belt they are able to transfer the skills and techniques Anna outlined into other dishes and recipes in the future.


To see other guest chef demonstrations like this one, visit our culinary conferences and cooking demonstrations page. Or to learn skills like those demonstrated by Anna Hansen, why not browse our programmes and courses? 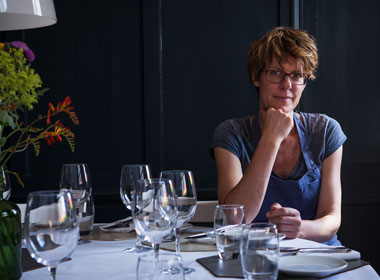 Anna Hansen was raised in New Zealand by an extended family who prized respect for ingredients, homemade food and culinary creativity. She arrived in London in 1992 where she worked at Margot and Fergus Henderson’s first restaurant, the French House Dining Room. She moved on to work with legendary fusion chef Peter Gordon at Green Street and The Sugar Club. In 2001, Gordon asked Anna Hansen to join him and partners in opening their Marylebone restaurant The Providores & Tapa Room, which was Anna Hansen’s first involvement with cooking and business she stepped away from the restaurant in 2005, opening The Modern Pantry in 2008. It became famous for its wholly original flavour combinations, featuring the best of local, seasonal produce coupled with eclectic, bold flavours and unusual ingredients from global cuisines. In 2019, Anna stepped away from The Modern Pantry to take a break and focus on the next step of her career.