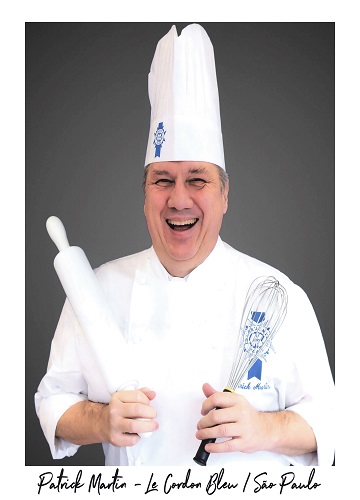 Technical director responsible for implanting Le Cordon Bleu in Brazil, has more than 25 years of experience in the institute. He was the Chef responsible for the technical development and opening of schools in Mexico and Tokyo, as well as teaching in schools in France, London and the United States.

During his career, the chef went through several restaurants in Paris, such as the Charlot Restaurant, and the three Michelin stars, Ledoyen Restaurant, Dalloyau buffets and Flo Prestige.

Among the prizes won, Martin received the title of Chef of the Year in Paris in the "Trophée National", and was a finalist in the "Meilleur Ouvrier de France" competition. The chef was also vice president of Educational Development in Culinary.

The arrival of Martin in Brazil is part of the traditional implementation process of schools applied in all the countries in which the institute begins its operation. 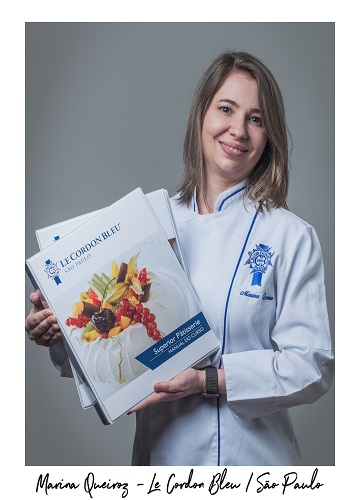 She has over 20 years of experience in the gastronomy area, of which, 15 years dedicated to various higher education institutions in the city of São Paulo, acting as chef and professor of bakery and confectionery. He graduated in Art Education (FAAP 1997), but decided to study gastronomy in 1998 (Culinary Institute of America / SENAC) and started his career in the area in 2000 as a content writer and chef at the Panelinha website. He did a year of television and later decided to pursue an academic career, obtaining a specialization course in Teaching in Gastronomy (Hotec) and Master in Hospitality (Anhembi Morumbi).
She did an internship in Portugal and Spain in restaurants with Michelin stars. She worked as a pedagogical coordinator of the graduate course in gastronomy (Anhembi Morumbi), as well as set up and coordinated the first distance course in gastronomy in Brazil (Anhembi Morumbi). Subsequently, she assumed the position of operational coordinator of the University's Gastronomy Center and for four years helped to restructure the area, putting her knowledge into practice in addition to valuing and promoting her team. She currently works as Academic Director of the Le Cordon Bleu São Paulo Institute. 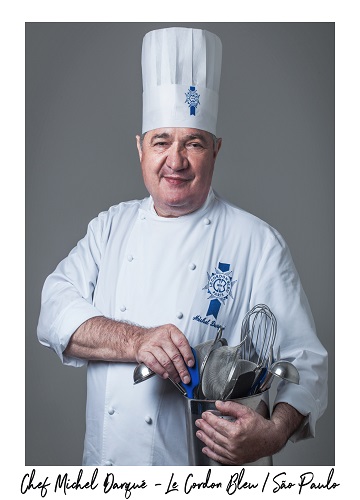 Michel Darqué was born in France, having worked in the Provence region and in the south of the country with Alain Ducasse.

He has been in Brazil for over 15 years and has gone through several restaurants, managing the kitchens of hotels like Renaissance and later Unique Garden, where he stayed for longer periods.

In his career, Chef also carries his travels around the world - in Portugal, Belgium, Luxembourg, Hong Kong, Korea and Thailand.
In the 1980s he worked at La Cuisine du Soleil, then under the supervision of chef Roger Vergé. Where to return to Brazil. 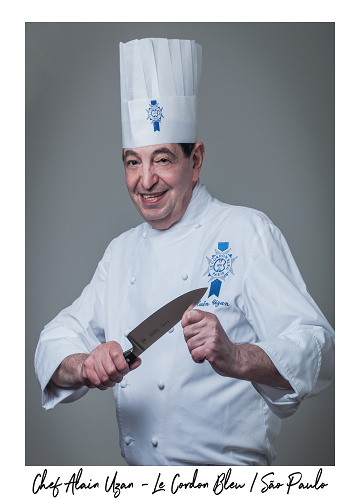 Born in Paris, the son of restaurant owners, Alain is Chef of Cuisine, lecturer, university professor, writer and associate consultant for WACS (World Association of Chefs Societies). He began his career with his parentes, with whom he opened three restaurants.

Still in France, starting from the desire to start again, he opened alone a new seafood restaurant called La Rivieira. Some time later discovered a passion for Boulangerie, specializing in all kinds of possible breads that could be sold in his store. In 1999, at the invitation of a friend, he spent a month in Brazil and fell in love with the place where in November of the same year he opened his first restaurant, Le Bistrot D 'Alain. In 2002 he opened his second restaurant, L'Assiete, in São Paulo.

Since then he has been a consultant in countless restaurants throughout the country, in the year 2013 he participated of documentary "Why did you leave? " directed by Eric Belhasse, based on the real stories of Chefs Emmanuel Bassoleil, Erick Jacquin, Laurent Suaudeau, Alain Uzan and Frédéric Monniercom. In 2016 he received the title of Maître Cuisinier de France and currently holds the position of Chef of cuisine production at the Institute of Culinary Arts Le Cordon Bleu São Paulo. 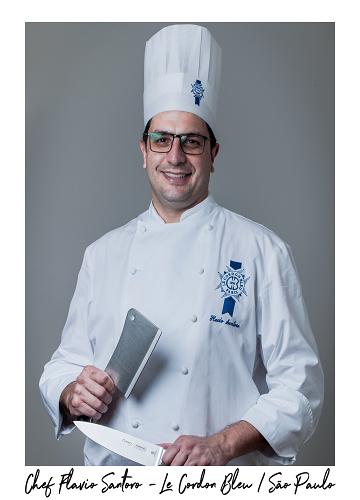 Graduated in hospitality at Anhembi Morumbi University, Flávio is a chef with more than fifteen years of experience. He passed by renowned restaurants such as, D.O.M., Garcia e Rodrigues, Eñe, Erick Jacquin Gastromia and Bistrô Charlô. He has a career of more than 19 years in the gastronomy area, his principle is to prepare recipes respecting seasonality and the quality of ingredients, prioritizing Brazilian products. Currently works as a chef de Cuisine at Le Cordon Bleu São Paulo 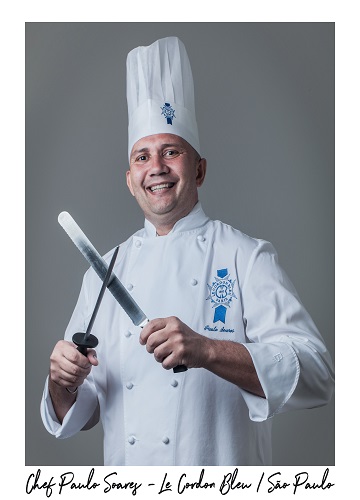 Chef Paulo Soares was born in Pernambuco and has over 25 years of experience in the world of gastronomy.

He began his career in São Paulo, in 1994, at Truta Rosa Restaurant, considered at the time the best fish restaurant in Brazil by The New York Times.

He also went through the kitchens of hotels and other restaurants in the capital of São Paulo until he arrived at Chef Rouge, a restaurant where he worked alongside several French chefs and was where he had his most recognized work, having received for several years the award for best French restaurant in São Paulo by Veja magazine.

Chef Paulo Soares is also trained at DUCASSE Education, Chef Alain Ducasse's gastronomy school in Paris, where he had the opportunity to intern at the Ore Restaurant in the Versailles Palace. 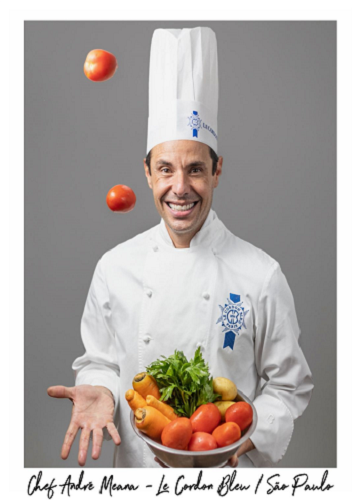 He started the work in kitchens doing internships in restaurants with award-winning chefs such as; Renata Braune and Tatiana Szeles. He left Brazil to study gastronomy, graduating in Manchester, at Tamiside College in England. When he returned to Brazil, studied in the international chef course at Senac São Paulo, where at the end were invited to be part of production as Chef for TV Show Receita Minuto and Dia Dia from Rede Bandeirantes de Televisão, where stayed for 5 years. He was hired by Unilever to be Chef Knorr, and did several TV, magazine and newspaper advertisements. He taught at the Anhembi Morumbi university, Mediterranean and European cuisine, Event and buffet techniques and Poultry and meat cutting techniques. He was a TV presenter on the Terra Viva channel, on TV SHow Rota gourmet, where traveled showing the culture, customs and cuisine of Brazilian cities. In 2015 he moved to the United States and worked at the Disney Company, having set up his Catering company, having been responsible for setting up events for Dior, Piquet Cart and privet Chef. He is currently the Production Chef at Le Cordon Bleu São Paulo. 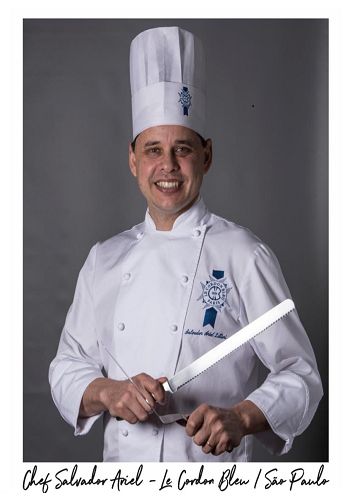 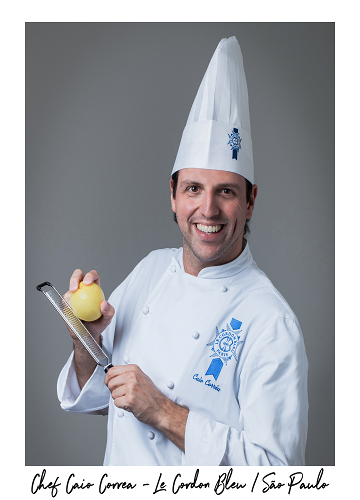 Caio is Chef Pâtissier, Callebaut Ambassador to Brazil and
postgraduate from Ealing Hammersmith and West London College in London.

She worked at the Ecole Gastronomique Bellouet Consell in Paris and worked with great chefs, including the Confectionery Ladurèe, one of the most respected in France. Back in Sao Paulo, Caio launched his own brand, CFC - Caio Corrêa Pâtissier, to offer classic sweets with a contemporary rereading, combining tradition and modernity with creativity and sophistication. 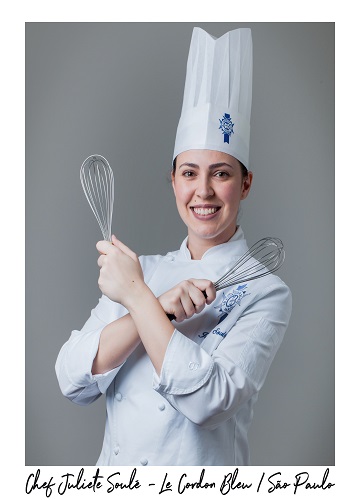 Chef Juliete Soulé has a degree in Gastronomy from Universidade Anhembi Morumbi and has been working in the pastry business for 10 years. He has extensive experience in high confectionery, acquired through work carried out in the hotels Club Med Trancoso, Hotel Renaissance, Hotel Emiliano and Palácio Tangará.

She deepened her chocolate techniques by working at Barry Callebaut with renowned national and international chefs.

He had an international experience in the production confectionery of the boutiques of Sébastien Brocard, in France.

He currently shares his knowledge of the art of confectionery at Le Cordon Bleu São Paulo. 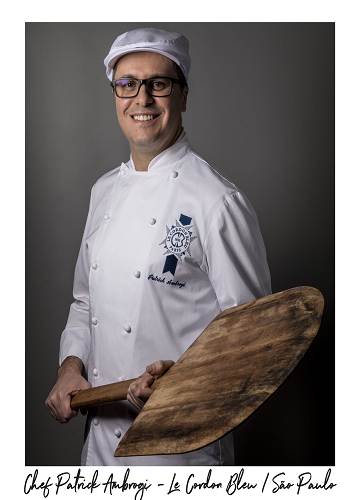 Food professional, with technological training in gastronomy higher education, and graduated in Food Engineering, with specialization in Product Development and postgraduate in Environmental Education.

In recent years, they have also been trained as instructors as teachers in Higher Gastronomy Courses and specialized courses and training in different areas of activity. At the same time, it carries out cultural trips for research and knowledge of food and gastronomic customs and habits, visiting all Brazilian capitals, as well as other countries in South America, North America and Europe.

Between January and July 2014, he acted as manager of new Best Beers Cerveja businesses.

He currently works as a professor of the Boulangerie course at Le Cordon Bleu São Paulo.