'Bonjour'... Paris or rather known as the city of lights and the most romantic city in the world was the destination chosen by Le Cordon Bleu Malaysia to host it's first ever study tour. What's not to be captivated about Paris for young budding and aspired professional chefs? From star-studded restaurants to old little boulangeries and bistros, the attention of 26 chefs was caught when Ms Ming Ho, the General Manager of Le Cordon Bleu Malaysia decided to launch its first-ever study tour to a foreign country in October 2017.

My patience was tested for 6 months and I was relieved when the month of April finally arrived. My luggage was packed in no time and after enduring a long 13 hours flight, my dreams were starting to realise as I stepped foot on Paris. Despite the long travelling journey, the fatigue did not bother me as my Parisian adventure was just about to start and it was high time to discover the French 'Arte De Vivre'. A trip to Paris is incomplete if the iconic Eiffel tower is not visited and that widely recognized landmark was precisely our first stop in Paris. This 129 years old tower built by Gustave Eiffel on Champ De Mars allowed us to catch a breathtaking view of the city and the experience will not be forgotten in a long time. We breezed past the luxurious street of Avenue De Champs Elysees and we ended up visiting yet another famous landmark in Paris, the Arc De Triomphe.

A study tour is not just about visiting landmarks but is also about discovering the gastronomical market of a destination. Chef Rodolphe Onno guided us around the gourmet food hall of Galeries Lafayette. From raw to cooked products, my senses were undoubtedly enlightened. Moreover, my knowledge of ingredients was broadened as I managed to discover ingredients which were foreign to me. Chef Rodolphe even suggested a few great ideas on utilizing the ingredients. 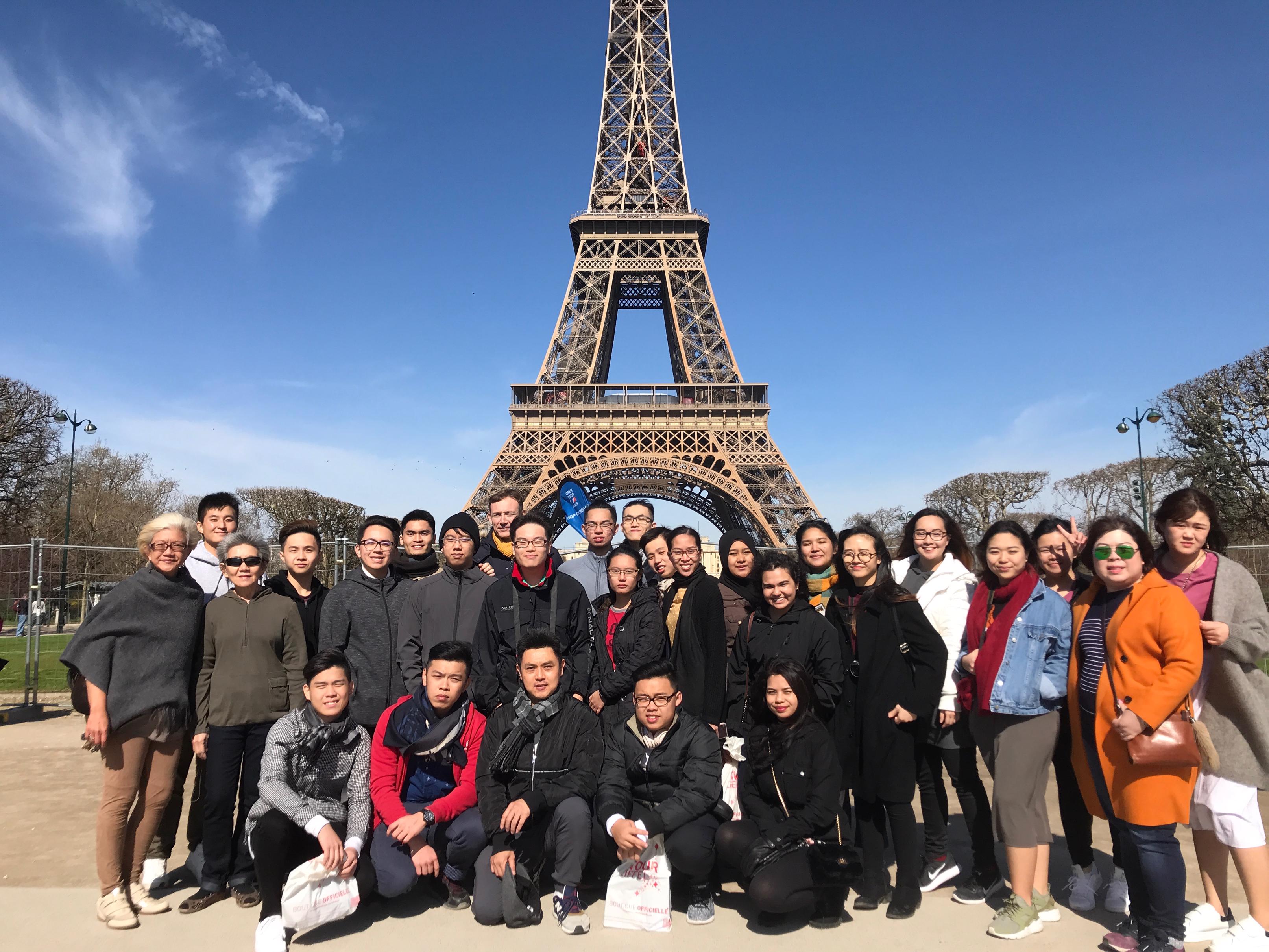 My French adventure was not just solely in Paris as I also explored another city which is located 3 hours away from Paris, Reims. It may be a small city but this city did not fail to entertain me. The architecture of the Notre Dame in Reims is nothing short of spectacular. Le Four a Bois, a small bakery which is known for their crusty Baguettes caught my attention as I had the opportunity to catch a glimpse of a traditional wood fire revolving stone oven.

The visit of Moet and Chandon’s cellar, the world’s most renowned Champagne company was probably the highlight of my trip. We were briefed on the history of this luxurious company and we were brought to the 28km long chilly cellar to witness the process of producing star-studded Champagnes. From harvesting to fermentation to the bottling process, I thought the Champagne tour was eye-catching as the information shared by the sommelier were interesting and it did heighten my general knowledge on this sparkling beverage. The opportunity given to taste the Champagne was the perfect icing on the cake of this tour. 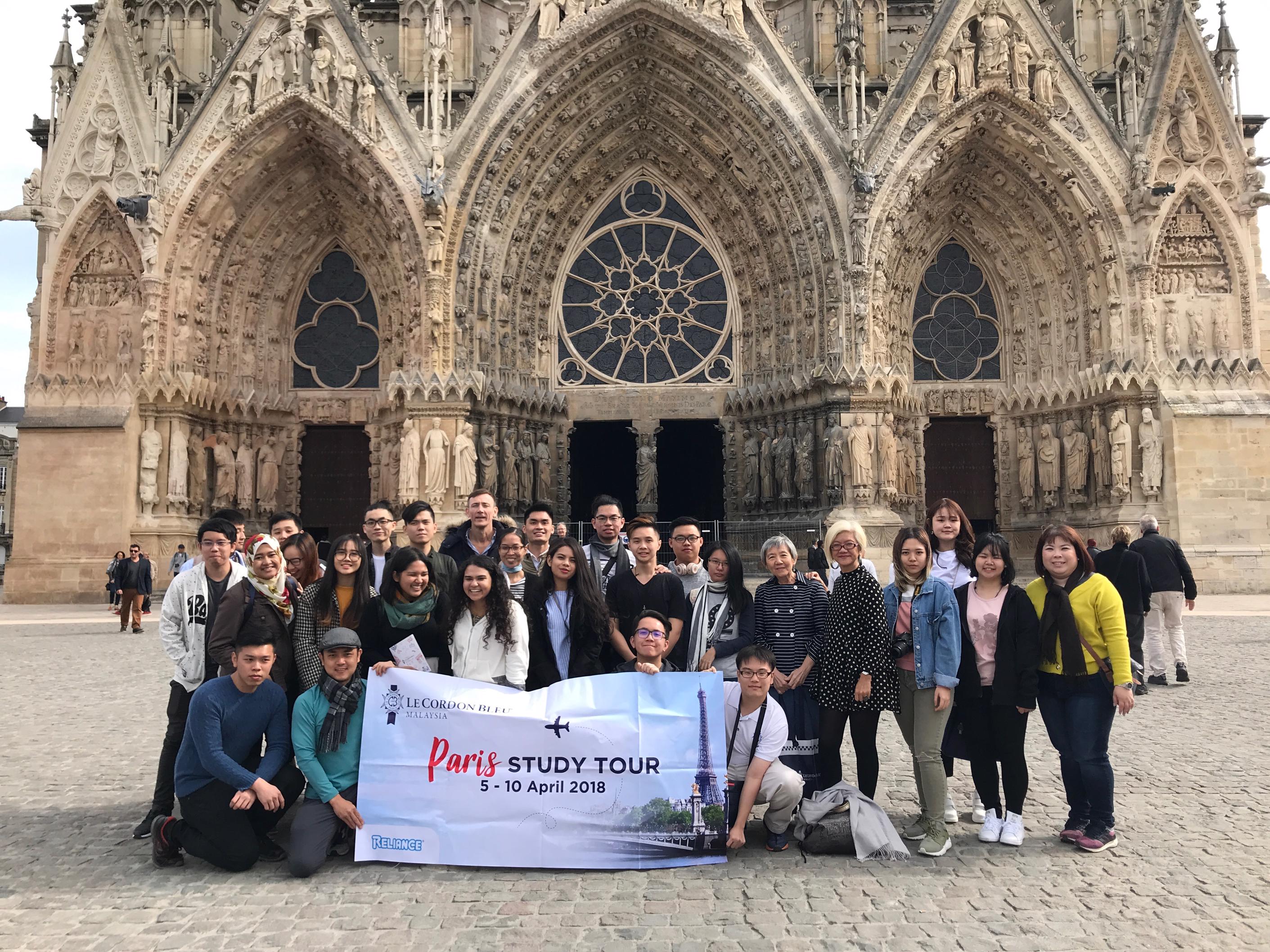 Since young, be it indoor or outdoor markets, visiting markets has always been my favourite activity during my free time. During my vacations, visitation of markets is always on my itinerary. This is because markets are the best place to seek inspirations, ideas and most of all, I get to explore new foreign ingredients. Thus, I am indeed very thankful that Le Cordon Bleu took us to Marche Beauvau, a local Parisian market. The produces were amazingly cheap and fresh and the sights and smell of the produce did lighten up my senses. While snacking on raw fresh fruits, Chef Rodolph guided us around the market premises and he even shared new techniques and ideas on utilizing the produces. Louvre, the world’s largest art gallery and also the home of the world’s most famous ‘Mona Lisa’ portrait was the next stop. The landscapes and portraits of the art pieces were stunning. Just a stone's throw away from Louvre is Rue De Rivoli, a street which houses arguably France’s most famous Salon Du The, Angelina. Well known for its hot chocolate and classic chestnut Mont Blanc, it was not surprising that it was crowded. Despite it being crowded, we were defiant and we still joined the queue. It was definitely worth the wait as the hot chocolate was simply decadent, rich and divine. The pastries did not disappoint us as well as it was extremely fine. Hard earned money was definitely well spent!

Day 4 has arrived and it was the day we were all waiting for, a visit to Le Cordon Bleu Paris! 9th April 2018 was the day where the dreams of 26 chefs came true. My emotions were well shaken as I had goosebumps and shed tears of joy just as when I stepped foot into the campus. We were split up into 2 groups to undergo Boulangerie and Patisserie workshop, respectively mentored by Chef Frederick Hoel and Chef Eric Verger. Personally, to be given the opportunity to bake Baguettes and Croissants in Paris itself is really a blessing! It is definitely a day which I will never forget in a long time and I always wish that I could relive that moment again and again. The day was capped off with a visit to Montmartre, home of the ever famous Sacre Coeur Basilica. Before we visited this sacred spot, we visited Bovida and A. Simon, purveyors of quality kitchen gadgets. Sacre Coeur was indeed breathtaking and was probably the most beautiful Basilic I have ever visited. 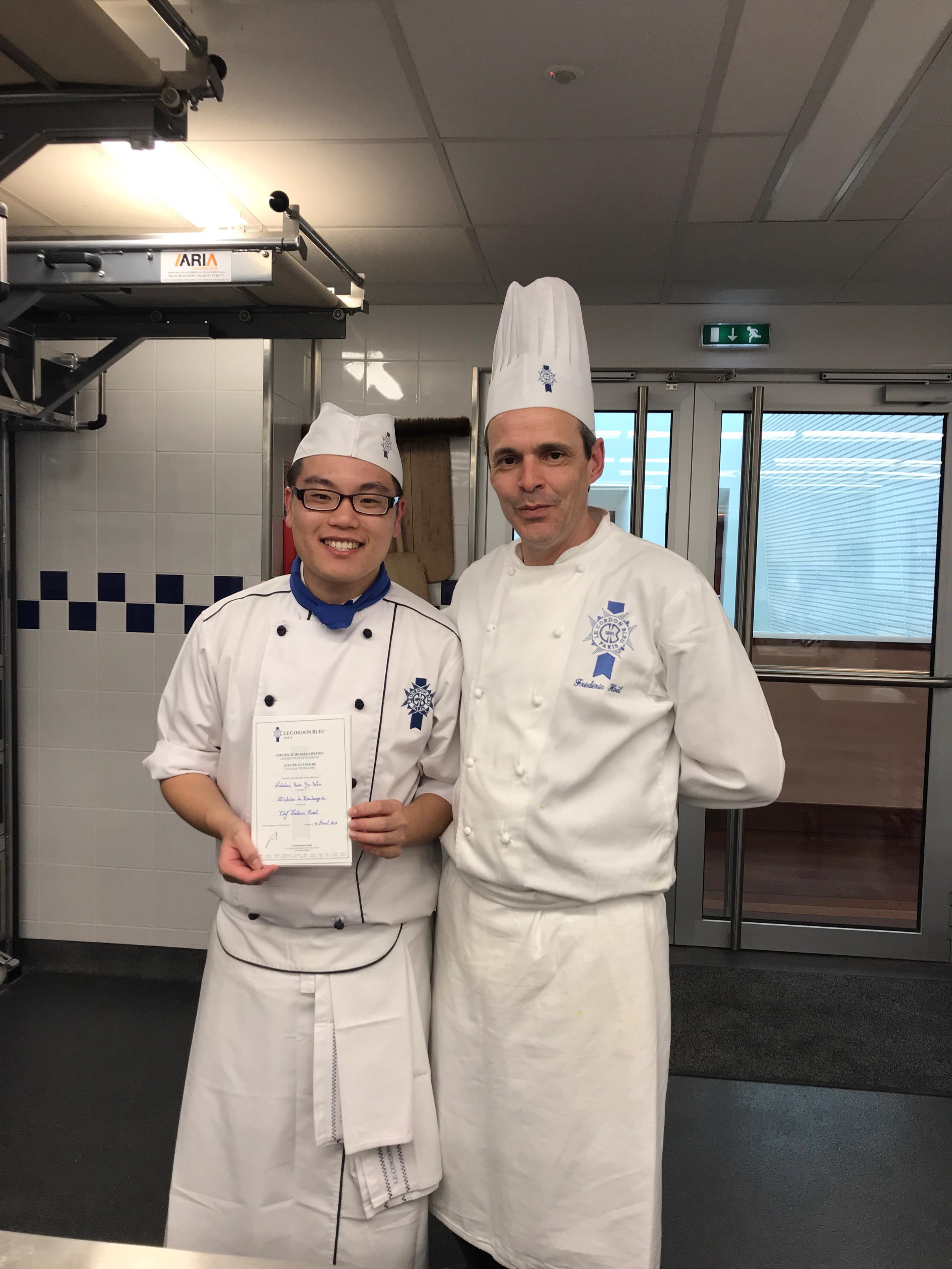 It was indeed a pleasure to be able to visit another market located in the neighbourhood of Montparnasse. It was our last day in Paris and we just couldn't afford to leave empty-handed. Personally, I just couldn't leave without Croissants, thus I left Paris with Laurent Duchene's Croissants which were voted the best in Paris. Packets of artisanal cheeses were purchased too. 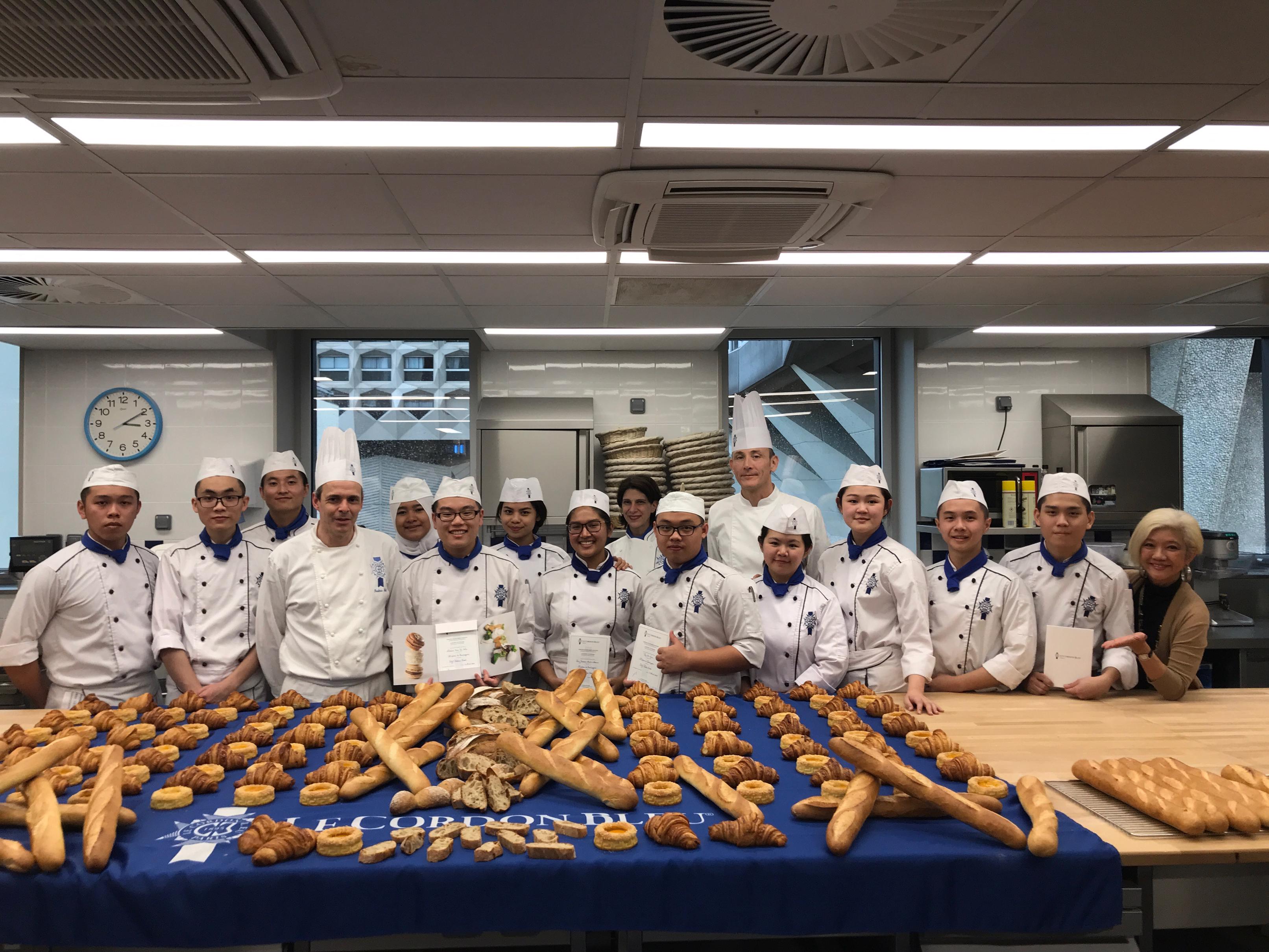 In a nutshell, this study tour was indeed a knowledgeable trip. My Paris trip was not only to enjoyment and relaxation, but also to explore and discover the culture and gastronomic scene in France. Chef Sylvain Dubreau of Le Cordon Bleu Malaysia once said it is important for chefs to understand that ingredients are sourced from the land or sea and not paper bags. Therefore, I am really thankful that Le Cordon Bleu Malaysia made me reflect on this statement by organizing a trip to the Champagne cellar. Furthermore, the experiences and knowledge I gained in Paris will definitely become handy in my career. France, a country which I will never get bored of and is also a country which I will keep visiting.