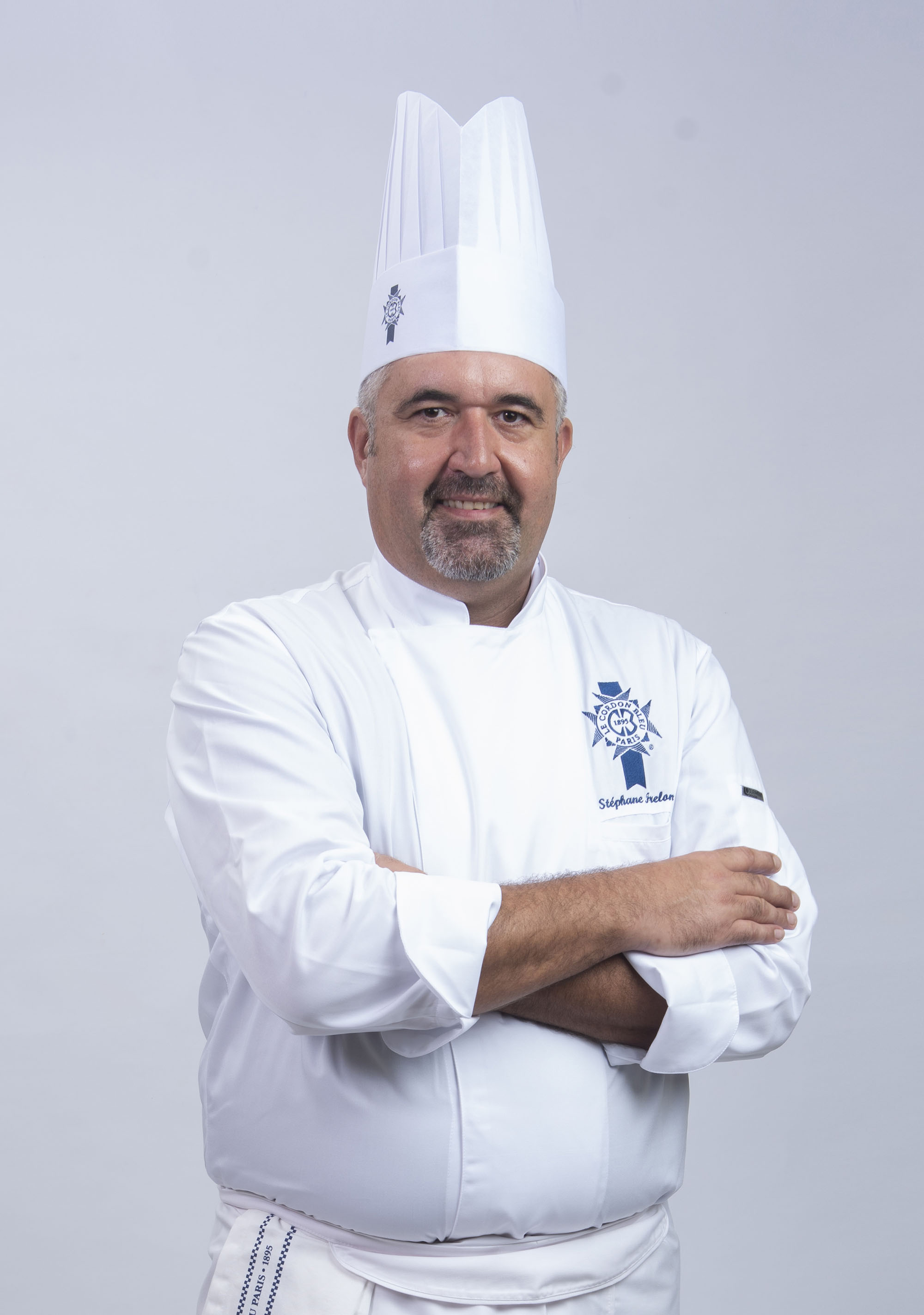 Chef Stephane Frelon was born in Tours, France and obtained his first professional chef qualification in 1992. He then proceeded to get the Bachelor’s degree on vocational training in Université du Québec à Montréal (UQAM), Canada in 2015.

Stephane started his professional career as a cook apprentice as early as 1990 at Hotel-Restaurant <Le Prieué> in Nouzilly, France. Then, he was the executive chef and manager in several restaurants such as Restaurant -Brasserie <A L’Aventure> in Montréal, Canada, Restaurant Gastronomique <La Fourchette> in Brighton, England, Restaurant Italian Fine Dining <Leones> in Hove, England and Restaurant French Fine dining <Victor’s> in Brighton, England in between 1997 - 2013 before started his teaching career in serveral institution and college all over Canada as a cuisine chef instructor. To pursue his passion in cooking, he also opened his own restaurant, <Le diable O’Thym> and <Le Diable D’Thym> back in France.

Wishing to impart his skills and experience to the younger generation, he decided to join the Le Cordon Bleu family as a cuisine chef instructor for 4 years. He was aiming to travel to Asia to learn more about the ingredients and an opportunity arises to fill up a vacancy in Le Cordon Bleu Malaysia, he was transfered from the Ottawa school to the Malaysia school as Executive Chef and Cuisine Chef Instructor since 2019. 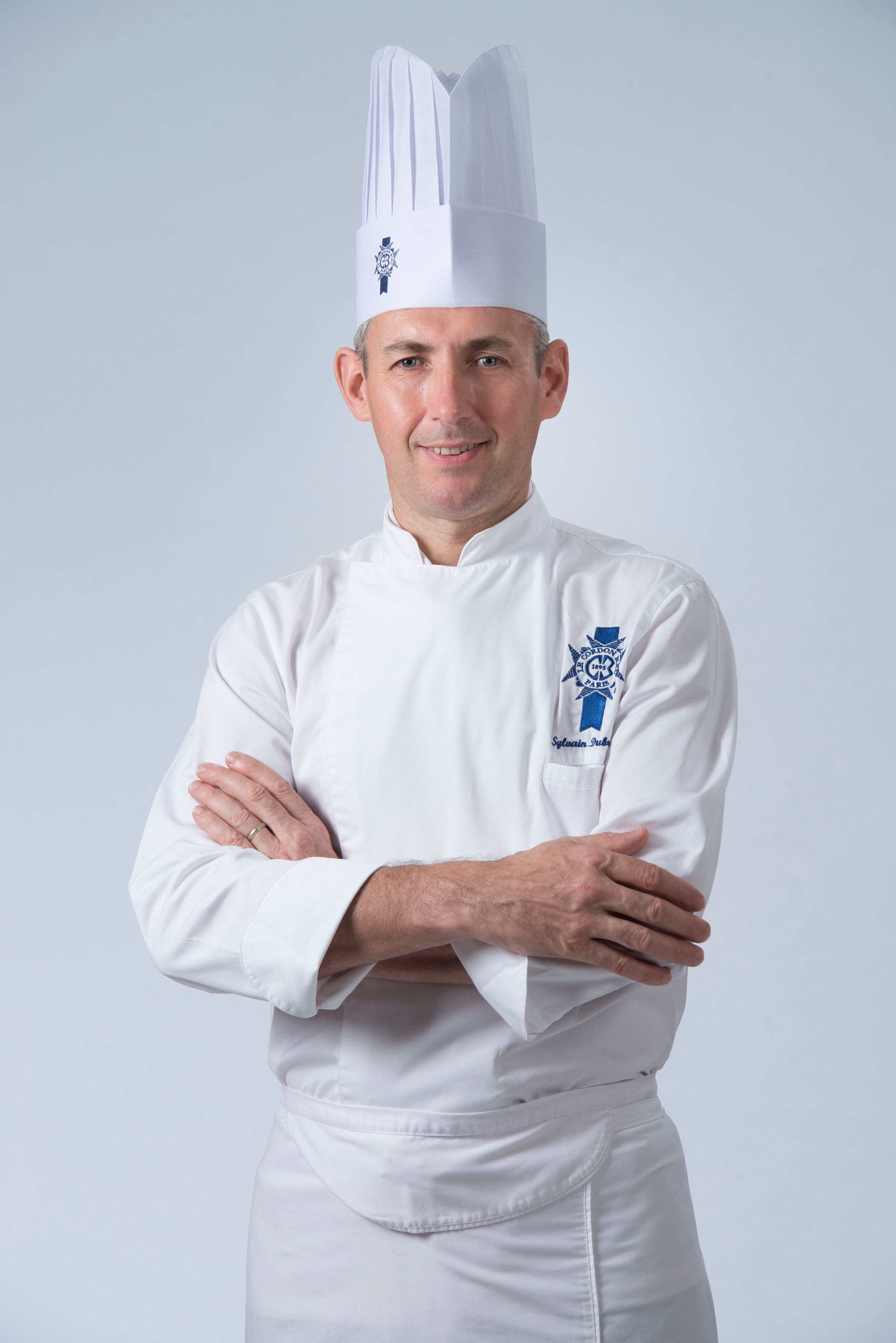 Creativity and determination have always been the earmarks of Chef Sylvain Dubreau’s career.

Upon gaining his professional certificates from the Centre de Formation d’Apprentissage in St. Germain de Lesignan in 1991, Chef Sylvain spent fourteen years honing his craft and mastering the arts of French cuisine at the Grandes Maisons area in Paris, where many Michelin-starred restaurants and hotels are located, including 3 Michelin-star La Tour d’Argent, 2 Michelin-star Les Ambassadeurs, 1 Michelin-star Prunier and the world-renowned 2 Michelin-star Hotel de Crillion.

His world travels began at the Michelin-star La Melazane by Gourmard restaurant at the Hilton Resort in Mauritius in 2004, before moving on to spend 5 years at world-famous Lotte Hotel in Seoul, South Korea.

Keen to experience the challenges of restaurant-ownership for himself, he then moved on to Japan, where he has established his own ultra-exclusive 17-seat French fine dining restaurant, the Sucre-en-Rose.

Always on the hunt for new challenges, Chef Sylvain has now joined Le Cordon Bleu Malaysia as Chef Cuisine Instructor and looks forward to sharing his journey with his students. 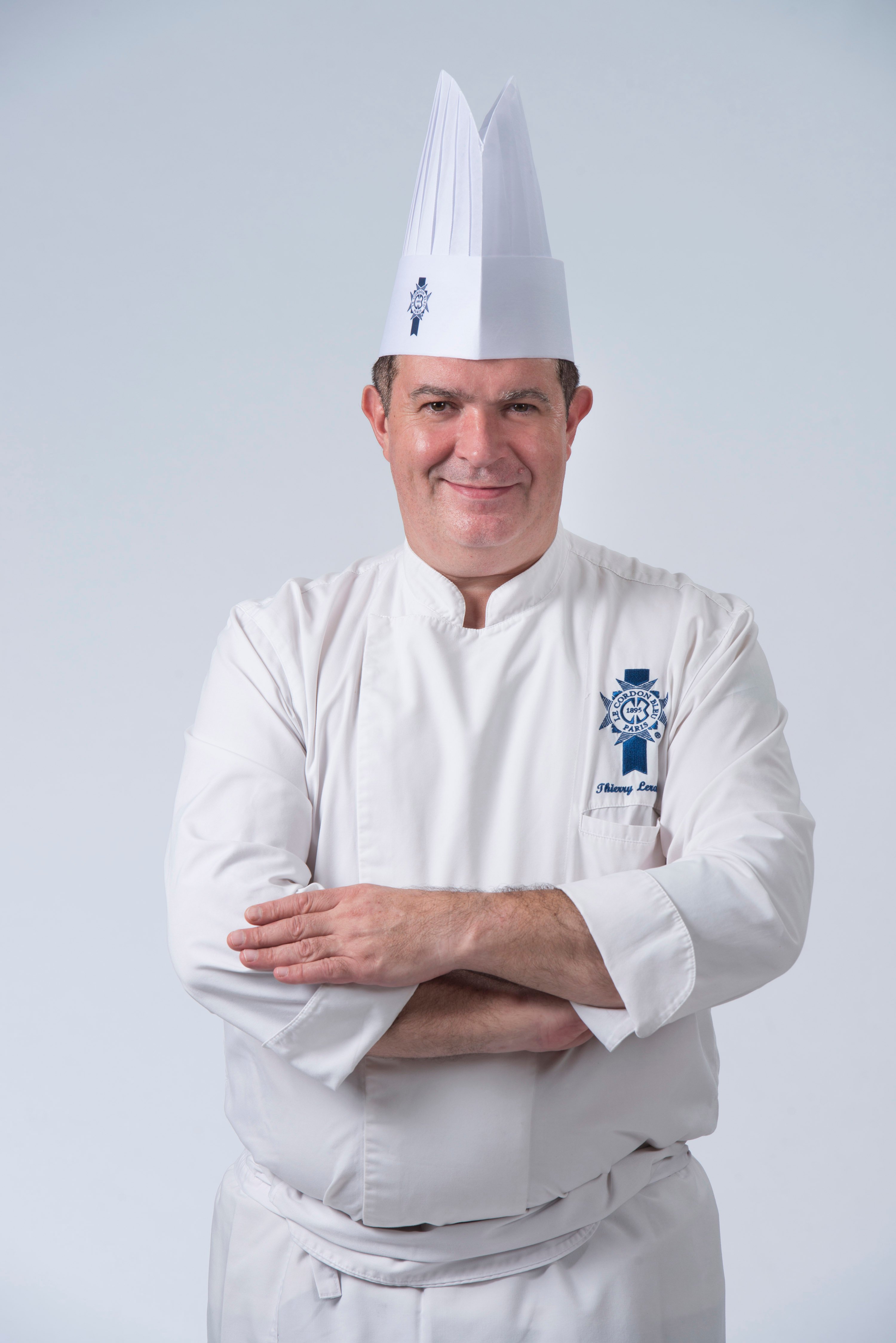 Chef Thierry was born in France, Normandy. He always had a passion for bakery and patisserie and a talent in the Art of Pastry
He started his apprenticeship as a baker, Patissier, chocolatier and confiseur in Normandy well-known for the fresh cream, milk product, cheese and apple.
Thierry Lerallu from an early age showed his predisposition for his job and was rewarded repeatedly as the best apprentice in various specialties; from the bakery to patisserie, He remains unbeatable and comprehensive.
After receiving his Diploma from CFA, Alencon France he ventured out to see the world and had set foot in Malaysia in the early nineties where he worked for several 5 star international hotels. It was in Malaysia where he discovered the Malaysian, Chinese and Indian cuisine.
After having worked in Malaysia for several years, his addiction to travel took him to Seoul in South Korea where he become an executive pastry chef in a 5 star hotel and he will open few “salon de the” on behalf of the company.
In 2003 he joined Constance hotel and Constance Academy and Mauritius IVTB in Mauritius whereby he had shared his professional knowledge with young Mauritian apprentices where he trains via an intensive Pâtisserie programme. He had also adapt all its techniques for high-flying fun at workshops conducted with Mini-chefs, and guests of the hotel.
His skills with baking, sugar and chocolate art had brought him much recognition in the yearly Bernard Loiseau Culinary Festival in Mauritius and they depended heavily on his talent for beautiful creations and desserts which made such a distinction and were highly regarded and appreciated by both participants and renowned guests.
With his numerous years in the industry starting in France and eventually all over the world, his appointment as Head of Pastry Chef at the Sunway Le Cordon Bleu did bring the patisserie programme to great heights in Malaysia and South East Asia. He subsequently joined the Le Cordon Bleu School in Seoul Korea but have returned to the Malaysia school as Pastry and Bakery Chef Instructor to commence our Boulangerie Programme
He is well loved by students and colleagues and is very patient in imparting the pastry arts skills to all who learnt after him. 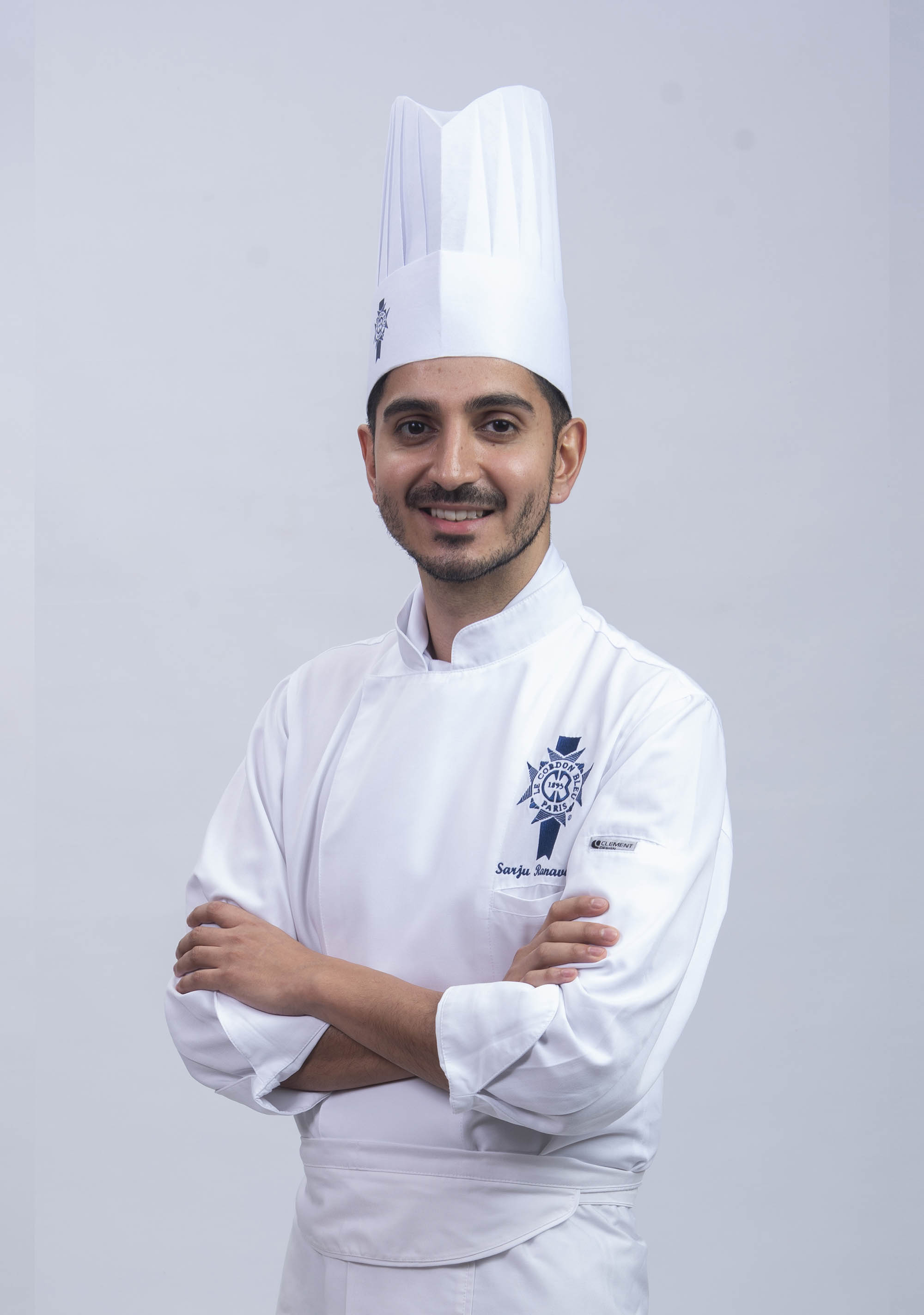 
Chef Sarju has recently join Le Cordon Bleu Malaysia. Being an alumnus, he studied and graduated at Le Cordon Bleu London in 2010, Chef Sarju did his apprenticeship at the famous Ritz Carlton Hotel in London which is one of the most prestigious hotels in the world. Chef Sarju then went on to work at the Dorchester collection, opening the chic 45 Park Lane in 2011 hosting the world-famous chef Wolfgang Puck’s first restaurant in Europe. Moving on to work at Brassiere Zedel, a tradition French brassiere holding up 1200 covers per day serving favorite French classics.


In 2013 Chef Sarju joined the prestigious and exclusive hotel The Berkeley in London’s Knightsbridge location. Whilst working at The Berkeley Chef Sarju began competing in local pastry competitions winning several awards including, best Chocolate Showpiece and Petit Fours as well as Entremet competitions. He worked at The Langham Hotel and also the oldest hotel in London, Brown’s Hotel by Rocco Forte where he reinvented the afternoon tea and pastry department focusing on modern trends and entertaining guests with sweet delights.


In 2016 Chef Sarju joined Classic Fine Foods UK as Assistant Pastry Chef at The Taste Lab, for three years he ran the Lab with Denis Drame MCA (Master of Culinary Arts). He hosted several guest chefs for workshops and demonstrations as well as teaching his own classes for professional chefs. He also worked with numerous suppliers and manufacturers on research and development for new ingredients and products. During his time at The Taste Lab, Chef Sarju competed at the UK Pastry Open and came up tops at the Chocolate Category which secured his place as the Chocolate Candidate to represent the United Kingdom in the Coupe du Monde de la Patisserie 2019 where the UK team was placed 5th in the Coupe du Monde de la Patisserie, highest ever ranking for United Kingdom, whilst he won special prizes for best Sugar Display and Eco Responsible, scoring 2nd highest on all artistic work and overall buffet. Chef Sarju then joined Le Cordon Bleu Malaysia in September 2019. 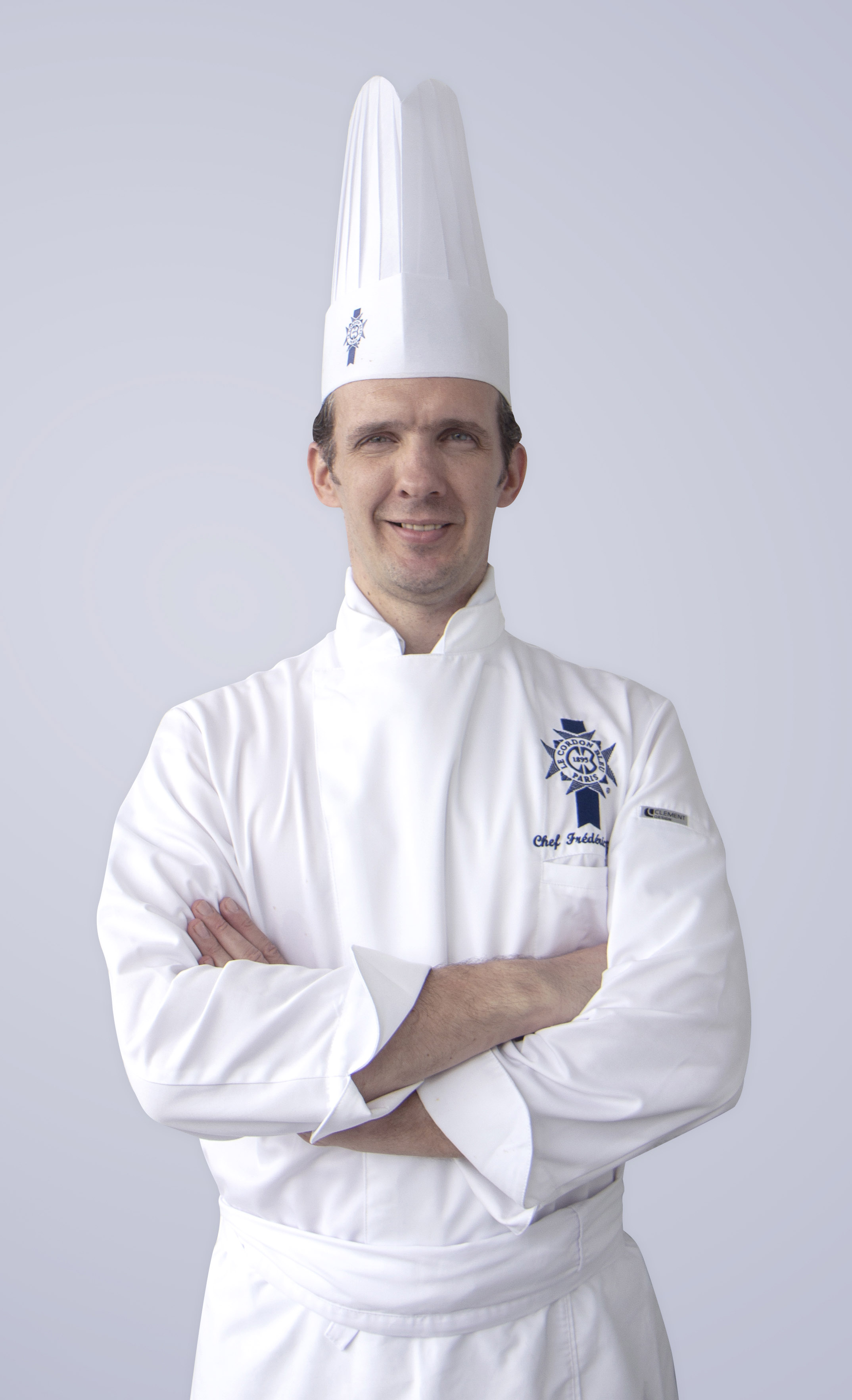 Chef Frédéric Oger, was brought up in the Loire Valley, France by his family of wine connoisseurs. Instead of making a career in the wine business, he found his passion in pastry at a very young age of 6 years old. His passion took a more serious turn when he started his apprenticeship program with the Association of Maison des Compagnons du Tour de France, the oldest establishment in France recognized by UNESCO. With them, he worked with various well-known pastry shops, chocolatiers and bakeries around France and Belgium, setting a strong foundation in the pastry arts.

At 21 years old, he travelled to England and exposed himself to fine dining restaurants working with Michelin starred chefs and reaching the position of Head Pastry Chef at the age of 24 with Michael Caines restaurant. He continued his travels to the Maldives and Middle East where he worked as Executive Pastry Chef in various 5-star luxury hotels and resorts such as Hilton now (known as Conrad) and assisted in the opening of a few hotels under the Rotana Group, the largest chain of hotels in the UAE.

Always wanting to share his experiences with a larger audience, Chef Frédéric continued his career in teaching as the Director of Pastry Arts with the Academy of Pastry Arts in Malaysia for 4 years, further enhancing his skills under various MOFs (Meilleur Ouvrier de France). This ignite his passion in teaching and chef finally found where he belongs, by opening his own pastry school where he managed for 10 years with the aim to offer the finest pastries and education to all who seeks to hone their culinary skills. Due to the pandemic, he had to close the school to continue his deep desire to impart his pastry. Chef Frédéric then joined Le Cordon Bleu Malaysia in September 2022 as pastry chef instructor. 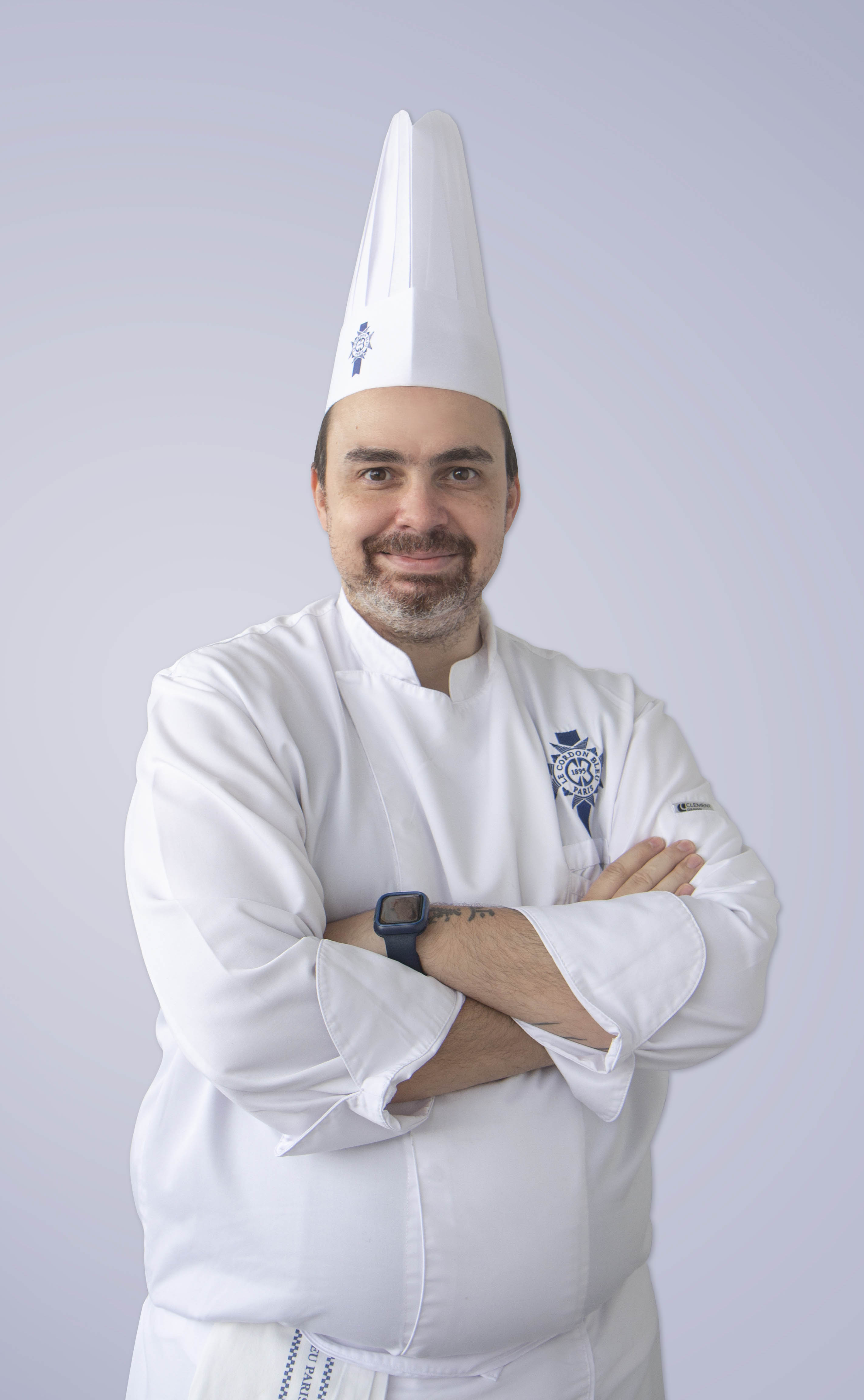 Born and raised in Burgundy, Chef Julien Bartement has grown up in a butcher family.  had discovered the pleasure of cooking with his Grand Mother who taught him some hearty typical eastern French dishes such as “Escargots à la Bourguignonne”.

At the age of 14, Julien has joined the renown Lycée des Métiers de L’Hôtellerie et du Tourisme de Toulouse (Toulouse Culinary School) and graduated in 2005 with a Higher Diploma of Hospitality Management . Through those 5 years in Toulouse he had the opportunity to train in some prestigious establishment such as the Hotel de Paris in Monte Carlo, The Hyatt Regency Paris CDG and The Sofitel Hollywood Hills in Los Angeles.

His career path had brought him all across Malaysia and the Toulouse area in the South Western part of France, he started as Sous Chef in a Brasserie in the suburbs of Toulouse with a young 1 Michelin star chef, then move forward and took command in 2 different brasserie in the Gers State. Chef Julien also gain strong products knowledge as he worked for some food service companies both in France and Malaysia, then used those knowledges to open his own brasserie style restaurant in Kuala Lumpur.

Chef Julien has always looked forward sharing his passion for cooking and his love for the products, thus he has recently had the opportunity to join Le Cordon Bleu in order to be able to share and train young chefs to be here at Sunway Le Cordon Bleu.

Founded in 1895, Le Cordon Bleu has been evolving from a small Parisian cooking school to become the leading Global Network of Culinary Arts institutes providing teaching tradition and excellence to more than 20,000 students annually.

With a network of more than 35 schools in 20 countries, Le Cordon Bleu’s role is to teach a whole range of technical and University training programmes for working in the restaurant, hotel and tourism industry as well as proprietor of your own patisserie, cafe, restaurant or your own catering company.

What People Are Saying About Le Cordon Bleu

don't take our word for it, here's what our alumni have to say