2021 Alumni of the Year Awards Nominee 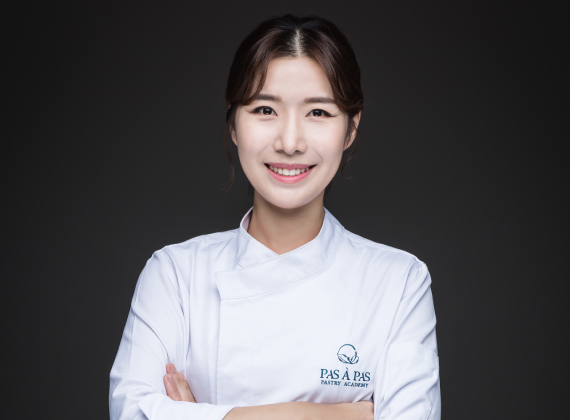 There have been many changes since COVID-19. Initially, students were given in-person classes where they could practice freely, however as such face-to-face classes became difficult, things had to change quickly. What started then was the use of "Home baking kits." At first, I wondered to whom these baking kits should be targeted. Considering that we gave professional baking classes at Pas-à-pas, I thought that too basic courses wouldn't work. Also, focusing only on difficult things would reduce the level of completion of the final product. Thus, we developed a baking kit for beginners so anyone can easily bake at home.

Additionally, to complement the needs of face-to-face classes, we ran live demonstrations of recipes and started a service delivering ingredients and recipes to people's homes. All of this went very smoothly, and we hope to improve this system further. I am applying and developing what I learned at Le Cordon Bleu in various ways.

The most important thing in my life is the Pas À Pas culinary academy that I am running. After completing the Pastry program at Le Cordon Bleu in 2014, I opened a baking studio and spent every day focusing only on the present. Since opening the academy, over 200 people per year and over 1,400 people have taken my classes, and I have shared my knowledge and stories regarding baking. I have also developed numerous desserts and turned them into products. My goal from now on, on top of the on and offline classes I am giving, I wish to open an offline store to develop Korean desserts and introduce them to more people.

Le Cordon Bleu is "the school that helped me find my life's path."

Opening a small café marked the beginning of my professional life. Back then, I mainly sold drinks, and I thought I needed more desserts to grow the café. So, following people's suggestions, I joined Le Cordon Bleu, where I fell in love with baking, and I continue learning every day as I work.

What is your favorite memory from your adventure at Le Cordon Bleu?

Of course, I enjoyed being told I did an excellent job by chefs at school, but more than that, what I value most from Le Cordon Bleu is meeting the people I studied with. I knew nothing about patisserie before joining Le Cordon Bleu. My fellow classmates helped me when I was struggling in class and still do so today. Classmates from Le Cordon Bleu are the first to help whenever we face difficulties at Pas À Pas.

My most outstanding achievement is sharing my knowledge and techniques regarding patisserie with people who share the same dream as me. While there are people who find patisserie easy and excel at it from the start, it is more challenging than most people think. This is especially a challenge for those who suddenly open and run a café or for those, who like me, are struggling to develop menus when managing a café for the first time. I think that being able to give new ideas to people like this is an achievement for me as well.

What advice would you give future students studying cuisine, baking, or pastry and why?

Don't make desserts that are only meant for nice pictures. At first, I also chased fame on social networking services and only made picture-worthy desserts, disregarding taste. Being rather impatient and always wanting to do more, I quickly rushed the process of making desserts. While I was able to grow quickly with the attention I received, I realized that working on a design only after having completed the taste aspect, even if it takes longer, was the proper way to make Pas À Pas grow. So, although I am still an impatient person and still rush things at times, I focus more on taste rather than design.

It is essential to make something perfect, even if you only make one of it when making desserts. I hope that you can enjoy cooking with a relaxed mindset rather than a rushed one.

I was busy every year with new plans coming up; however, it feels like this year was exceptionally more dynamic. First, Pas À Pas opened a store in department stores, so I am working to make Pas À Pas more known to the public. Additionally, I will be opening a Pas À Pas café in Jamsil, Seoul. Ahead of this, I am developing new desserts, and I am also continuing my research to prepare my book that will be published next year.