Hida-Beef, a Different Kind of Beef 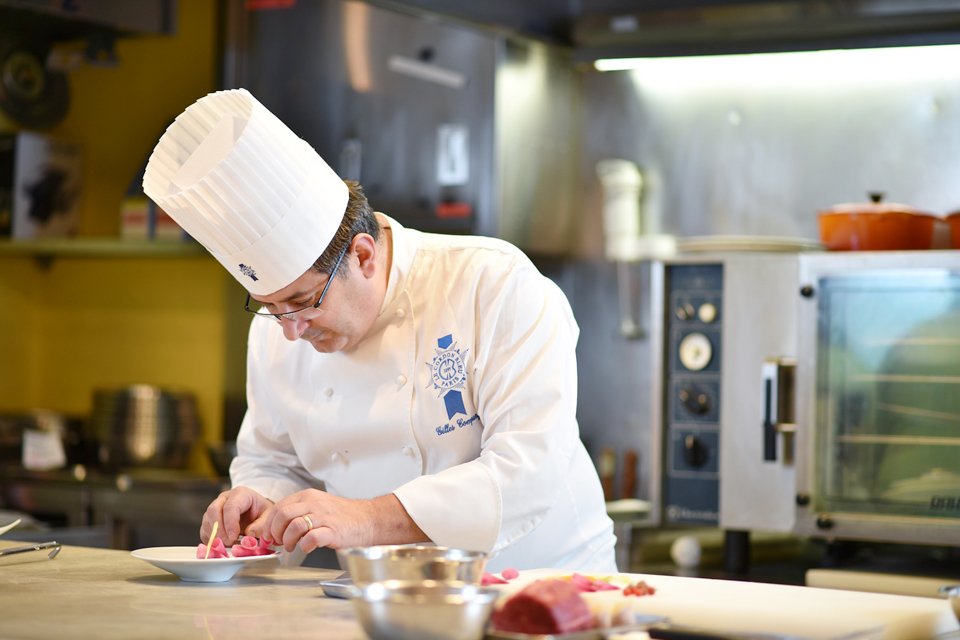 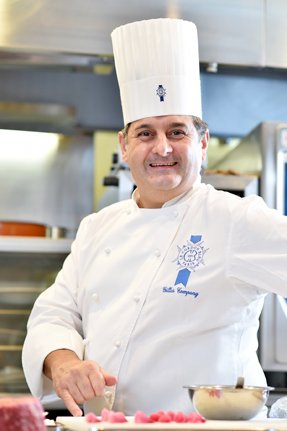 Japanese cuisine tends to be more subdued than its French cousin, opting to accentuate inherent flavours in ingredients rather than building layers of flavour using sauces and techniques. Le Cordon Bleu Tokyo cuisine chef, Gilles Company, seeks to emulate this subtlety of Japanese cuisine in French cooking using a Japanese ingredient he has come to love: Hida-gyu (Hida beef).

Hida is a mountainous and forested area located on the Northern coast of Honshu. The beef from this region is one of Japan's special types of fine branded beef known for its unique aroma, texture, and taste. Quality Japanese beef can be identified by the elaborate patterns of fat on its surface, and the marbling on Hida beef is said to be exquisite.

Taking out a block of Hida beef tenderloin ordered specially for the dish, Chef Gilles' lips curl in delight, betraying his excitement for this excellent product: "Look at this beautiful marbled fat!"

"Hida beef is an incomparable kind of beef. Taking advantage of its wonderful flavour was my first priority, so for this recipe I decided to concentrate the scent and juiciness [of the beef] into a bite-sized package."

The recipe is Hida beef ravioli.

The filling is a humble mix of Hida beef, seasoned with salt and pepper, and nothing else – no liaison, no other ingredients. The pasta dough is another homage to the meat. Instead of eggs, the dough uses beef fat, allowing for the pasta to have a bouncier mouth-feel.

However, the challenge with Hida beef is that its extensive marbling, the very thing that makes it remarkable, causes it to be it a delicate product to handle. The fat is the essence of its flavour, but it can spoil if overworked.

"I chose to cut [the beef] finely with a knife to make the ravioli filling. If you use a machine to grind the meat, it smashes and heats up the fat and damages it," warns Chef Gilles.

Overcooking the meat can also be disastrous: "Boil the ravioli for only about one and a half minutes. I deliberately take them out while the inside is still rare because I want to keep the juiciness of the meat."

Accompanying the ravioli is a sauce of chicken consommé seasoned with various kinds of mushrooms and Madeira. Chef Gilles finished it with a touch of soy sauce for roundness and an appetizing amber tint. The ravioli sit on this simple clear sauce, topped with truffles and framed by an assortment of colourful vegetables.

The chef reveals why colour plays such a prominent role on his plate: "I consciously made use of five colours: white, black, red, yellow and green. These colours are very important in Japanese cuisine, and this is my interpretation of the aesthetics of Japanese cooking."

The look of the plate rings true to the understated aesthetic of Japanese cuisine. While the techniques or foundation for the dish may be French, it has a Japanese feel because each component is straightforward but beautiful because of it. 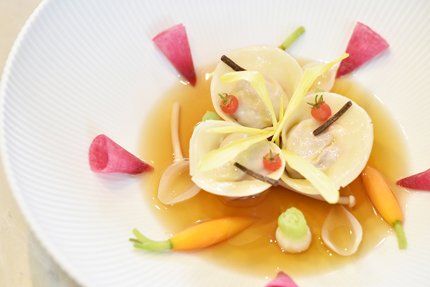 Tasting the ravioli, I realized everything existed on the plate to bring out the flavour of the beef. The consommé sauce, infused with mushrooms, gives an earthiness that draws out another dimension of flavour from the beef. The vegetables, cooked simply, offer texture and freshness to the meat. The beef itself is succulent and sweet, its fat fragrant and rich but not in the way that it feels greasy or overwhelming. The most impressionable part is the aftertaste. That beautiful fat lingers on the palette; a reminder of how good food can be when you marry quality ingredients with expert hands.

For Chef Gilles, finding a new treasure trove of ingredients and cooking styles is an indescribable type of fun. Despite having only been in Japan for a few months, he is determined to see what else Japanese cuisine has to offer and what else he can get his hands on to toy with: "I've been in the cooking world for thirty-five years, but every time I find an excellent ingredient like Hida beef, my heart starts to dance! There's a lot of fresh food in Japan, and the seasonings are impressive. I want to challenge myself to bring out different sides of Japanese ingredients with a French approach like I did with Hida beef."

Whether you exclusively follow a plant-based diet, you're doing Veganuary or just fancy trying something new, there’s a world of flavour to be discovered in ...

Poulet Reine Elizabeth, now widely known as Coronation Chicken was created by Le Cordon Bleu London to be served at the Coronation Luncheon in 1953. Our Le ...

Le Cordon Bleu Paris students took part in an historic event to mark the Queen of England’s 70-year reign. On the evening of 1 June 2022, they provided support ...

The final of the 54th 'Taittinger' Culinary Prize took place at Le Cordon Bleu Paris institute on 31 May. The jury, presided over by three Michelin-starred chef ...

Le Cordon Bleu, the leading global network of culinary arts and hospitality management institutes, will launch their dining concept in the City of London this ...

Sign up now and join us on June 9 to meet our recruiters and learn how you can become a Le Cordon Bleu Student today!