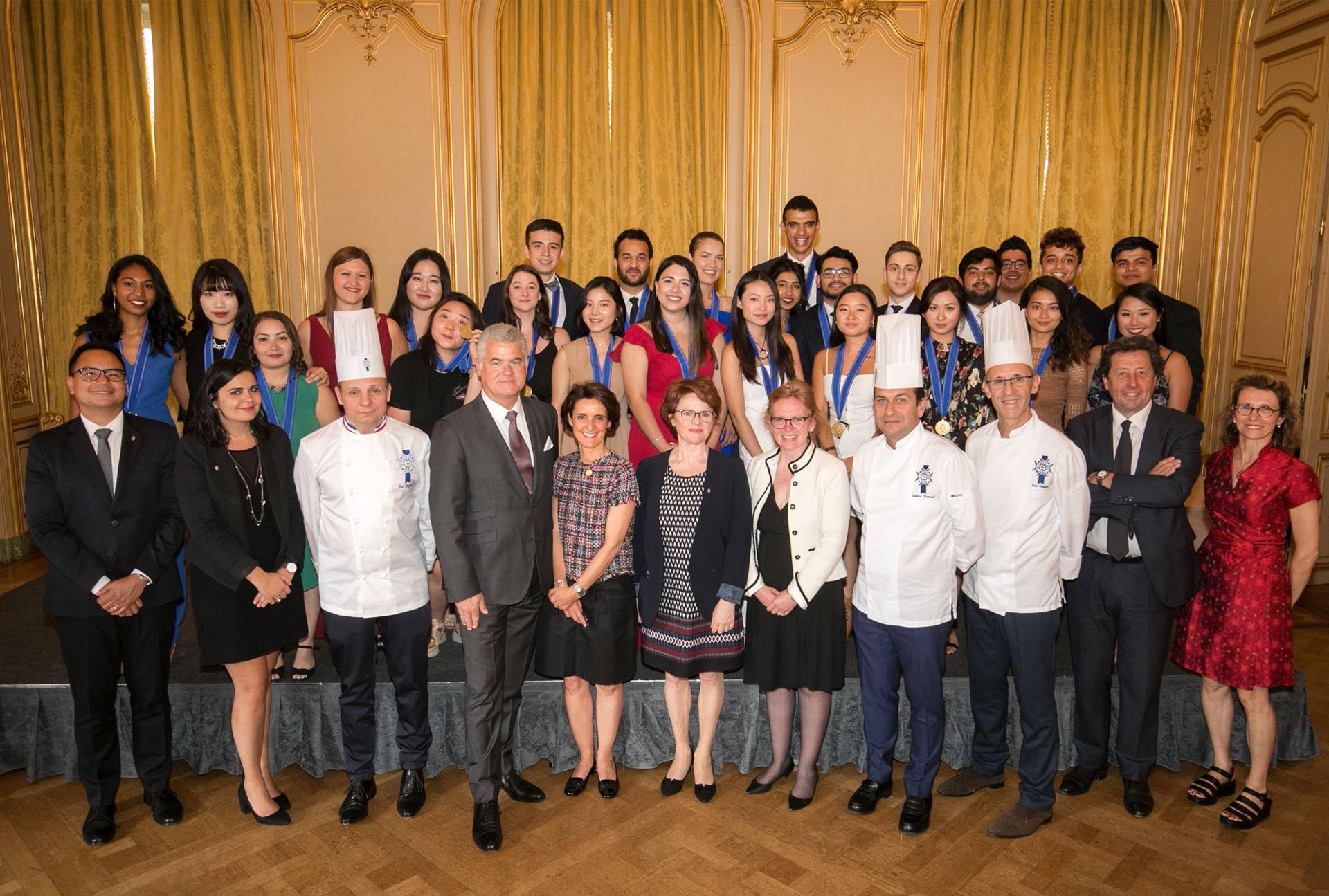 2 July 2019 -Le Cordon Bleu Paris, the leading global network of culinary arts and hospitality management institutes, in partnership with L’Université Paris-Dauphine, a leading higher education institution in the field of management, celebrated the first graduation ceremony of the pilot Bachelor Programme of the Le Cordon Bleu Institute in Paris on 21 June 2019. The ceremony took place at the Cercle de l’Union Interalliée in Paris, with the presence of Denis Courtiade, serving as the class patron.


The students received their double international diplomas from L’Université de Paris-Dauphine called “Talent en Management des Arts Culinaires et de l’Hôtellerie” and the Bachelor of Business, specializing in International Hospitality Management or Culinary Arts Management, depending on their chosen major. Since 2018, the management modules of the third year have been taught by the Paris-Dauphine teachers at their campus. These courses are aimed at young French and international talents of the future who wish to become leaders in the hotel and gastronomy sectors.

The third and final year of their education focused on student specialisations and business management training specific to the hotel and gastronomy sectors to provide them with the keys needed for success in the professional world. Some of the modules include marketing, digital marketing, management, human resources, customer relations, finance and accounting.

For the first graduation of the Bachelors, Le Cordon Bleu had the honour of welcoming Denis Courtiade as the class patron of the graduating class. As a world renowned maître d', his professionalism and French savoir-faire have earned him numerous awards throughout his career. In 1991, he was awarded the title of 1st Chef de Rang de France at the national competition held in Reims called le Trophée Jacquart. Later in 2010 came Le Grand Prix de l’Art de la Salle – Meilleur Maître d’hôtel du monde or Best Butler in the world. In 2018, the Les Grandes Tables de France awarded him the Prix Mauviel -1830 for Meilleur Directeur de Salle du Monde or Best Dining Room Manager in the World.

Wishing to convey his passion for this field where the human aspect is very important, he shares his vision, his experience and his know-how with students in various training schools, making it possible to instil and promote both the theoretical and practical aspects of his profession. In 2012, he created the association Ô Service – des talents de demain, a play on words meaning ‘In service... of the talents of tomorrow’ with the aim of restoring meaning and purpose to the profession by opening channels for new ideas and innovation.

The graduating class was composed of 25 students representing 20 different nationalities. The class patron and the entire institute team congratulate and encourage the new graduates, who are now ready to embark on their professional projects.


Bachelor of Business in Culinary Arts

At the age of 30, Nuno decided to follow his passion for pastry. Portuguese by birth, he put aside his career as a doctor and flew to Paris to enrol in the ...

Le Cordon Bleu Paris is happy to announce the reopening of the institute on Monday, 6th July. All teams are looking forward to welcoming students, employees and ...