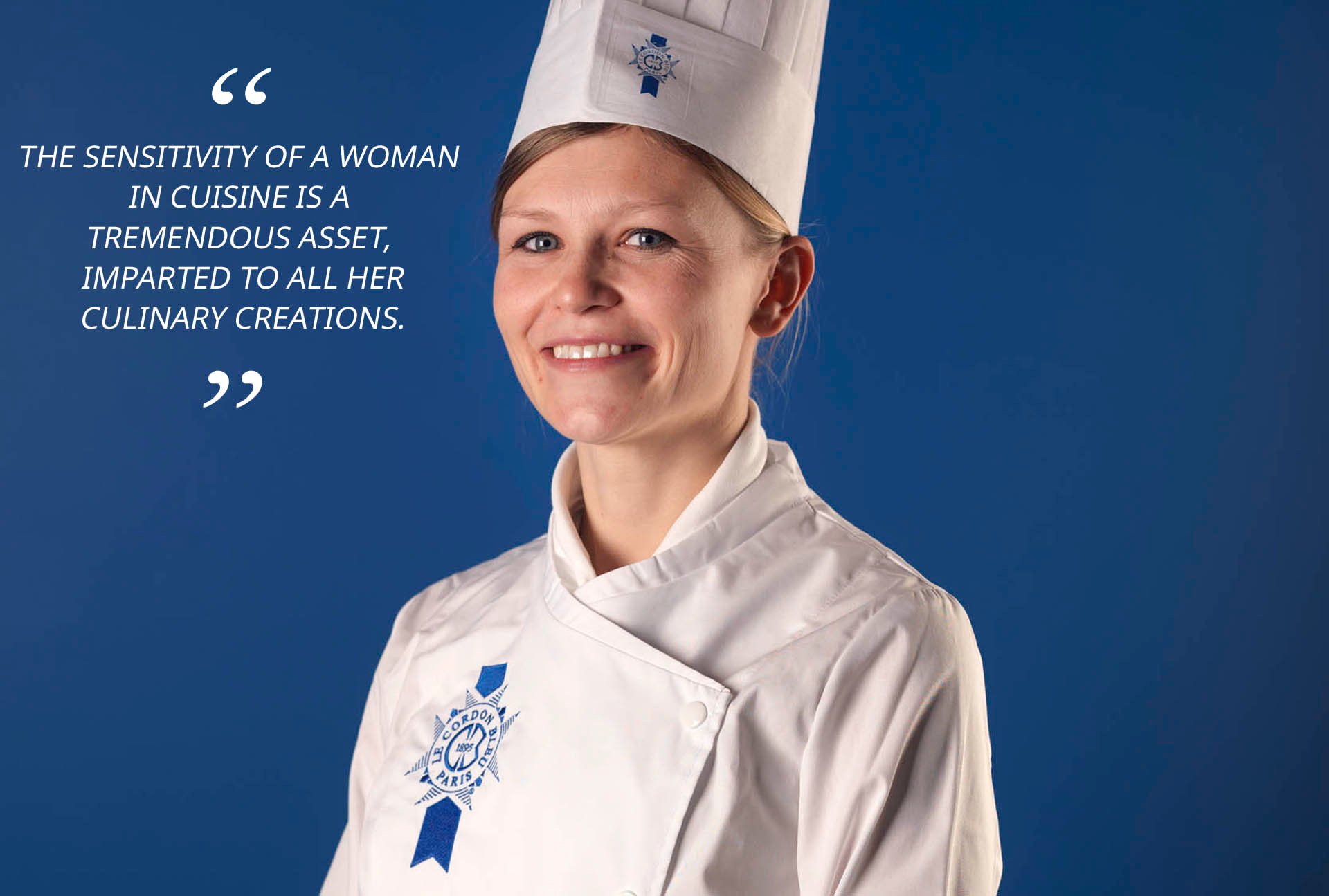 How did you become a cuisine Chef? Where did your passion come from?

I was born in Ukraine and came to study in France in 2003, when I was 20 years old. I stayed with a French family which had 6 children. We spent a lot of time cooking and eating. They taught me all about delicious French cuisine and its traditions.
I was studying foreign languages at the Sorbonne in Paris and really enjoyed cooking in my spare time. I wanted to become a translator but my family encouraged me to follow my passion. They realised I enjoyed cooking more than the career I had initially planned.
During the last two years of my degree, I studied cuisine at a hospitality school in preparation for my CAP. I juggled between the two with the aim of taking my cuisine CAP, which I successfully passed as an independent candidate in 2005.

I began working as a commis at the Cap Seguin restaurant in Boulogne, with chef Feval. In the space of 2 years, I became demi-chef de partie and chef de partie.
Chef Feval was immensely passionate, extremely focused on ingredients and constantly sought perfection. Despite the difficulties of this profession, he made me see that it was worth it. After a year and a half, he left the restaurant and the owner decided to appoint me to the position of chef. I managed an 8 person kitchen brigade, it was my first experience as a chef in the dual role of chef and manager, which I did for 1 year, from 2008 to 2009.

In 2009, I joined the kitchen brigade at the Four Seasons George V Paris hotel’s Le Cinq restaurant. Chef Éric Briffard was in charge of Le Cinq when I began. My first 6 months were spent on room service, before moving into the role of commis for 2 years. I then had my first child. When I returned to work, I was put in charge of organising banquet packages in my role as demi-chef de partie, continuing as chef de partie for 3 years.
I worked at Le Cinq restaurant for 7 years in total, leaving in 2016. It is a beautiful and prestigious hotel: working in a variety of roles enabled me to learn myriad skills. Room service teaches you to work at lightning speed, in the two Michelin-starred Le Cinq restaurant, you learn discipline, precision and the demanding nature of the profession. Finally, for banquets the main skills required are to be organised, pragmatic and reliable.
In 2016, my former chef at Le Cinq restaurant, Éric Briffard, who was now in charge of the Chef team at Le Cordon Bleu Paris institute, asked me if I was interested in the role of menu management for the forthcoming opening of Le Café at Le Cordon Bleu Paris school, and events. I joined his team in June 2016.

I now have a fair amount of experience and my passion has never wavered, a passion which I want to teach and share with students from around the globe.
Having working with many apprentices, commis, and extra helpers for banquets at the Four Seasons George V hotel, I realized the importance of teaching.

Certain things were second nature for me and this was not necessarily the case for the youngsters in my team. Being with them taught me how to explain things. We also learn, thanks to them and their questions, it is a win-win situation.

Today, I teach several classes on the organisation of cocktail parties/banquets to students taking bachelor degrees, and support students who volunteer in Le Café.

I would say that 70% of my time is devoted to Le Café and 30% to events. I work on both creating recipes, managing orders and staff. I am in charge of a team of 5 people and must ensure that Le Café Le Cordon Bleu Paris runs smoothly and effectively.  Finally, I work on the preparatory stages and setting up of in-house and outside events.

Discipline is, in my opinion, the key to becoming a cuisine chef. You need to follow your passion; if you don’t enjoy the job then the difficulties you encounter will make you give up. You need to be determined, don’t let anything stand in your way. It is important to pay close attention to detail and to keep one thing in mind: how can I make the customer happy?
I would also say that during your career you should work at least once in a Michelin-starred restaurant. It is a great learning experience; you are rubbing shoulders with excellence.

What, in your opinion, is the role of women in the world of chefs?

Today, there are very few women in the gastronomy field. As a female chef we need go that extra mile to prove ourselves. However, recently, female chefs are increasingly in the spotlight and I find that amazing.

I think there are several reasons for the lack of female chefs. Firstly, it is a very physical job, which takes up a lot of time and for which you must be constantly available. When a woman decides she wants to start a family, she will find herself in a very difficult situation, trying to reconcile family life with the discipline required for the job, especially in a Michelin-starred restaurant. I really admire women like Anne Sophie Pic who manage to juggle everything successfully, they are role models.
The mentality that reigns in kitchens also plays a part, some people do not recognise the legitimacy of a female chef.
Finally, for many years cuisine was considered to be a very low-prestige job. Contrary to today, it was a job that very few people considered a dream occupation so not many women carried out training. Nowadays, more women are being trained and entering the job market, female chefs are increasingly part of kitchen brigades.

What, in your opinion, are the advantages of being female in the role of a chef? What advice would you give to a woman who wants to make her mark as a chef?

Sensitivity, finesse and attention to detail are the main advantages. There is a reason why we talk about the feminine touch.

I believe that the sensitivity of a woman in cuisine is a tremendous asset, which is imparted to all her culinary creations.

I would advise them to combine their sensitivity and discipline, to pay close attention to detail but also to work quickly and efficiently. I would encourage them to follow their passion and never give up: persevere.

The capital of gastronomy in the world? I would say Paris (Rungis, leading chefs)

One Chef, if you could only choose one? Jean Yves Corvez, the person who taught me everything

An anecdote about your career? One of my first banquets at the Four Seasons Hotel Georges V’s Le Cinq restaurant. We made a pyramid of langoustines measuring over 2 metres and 20 whole lambs. We were aiming for something lavish and out of the ordinary.

Guillaume Siegler spent many years working in gastronomic restaurants before moving to Japan, where he entered into a partnership to open a restaurant. He went ...