The Mystery of
Japanese Flavours
– Shiso 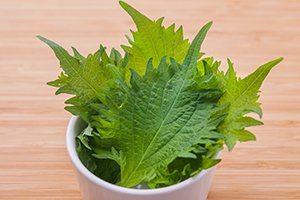 The small green (or red) leaf may not be noticeable in the herb section at the supermarket, but once you’ve had a taste of it, you won’t be able to forget its distinct and fresh flavour. As a garnish or as a main ingredient, shiso can be used in a various of ways…even in desserts! One thing is for sure, it’s very easy to get hooked on shiso.

“I had never seen shiso before coming to Japan. We don’t have it in France!” says Chef Dominique, who arrived in Japan in 2000. Fifteen years have passed since then, and things are certainly different now. “I found it very different- at least, different from what I was used to. But somehow, I was fascinated by its aroma.”

Shiso is an ancient herb in Japan. People only consume its leaves. There are 2 kinds of shiso – one of them is called aojiso (green shiso; “ao” means green in Japanese).

Aojiso is used as a side for sushi or sashimi, to add a touch of colour. The tasty leaf is also used as an ingredient in tempura, where it’s coated in a batter then fried – a great way to enjoy the aroma and freshness of the herb!

The other type comes in red, called akajiso (red shiso; “aka” means red in Japanese).

For Chef Dominique, several Japanese ingredients were a completely new and eye-opening experience. “I am not only talking about shiso, but also any other ingredients someone tries for the first time. At first, you feel surprise and then, by the time when you get used to it, you find it more and more attractive.” 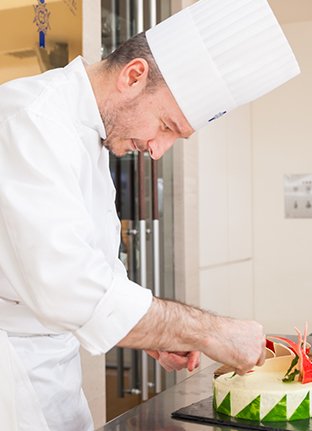 Chef Dominique presented a cake made using shiso and basil.He then suddenly had an idea: he made two chocolate decorations and placed them on the cake, turning it into an artistic and aesthetically stunning creation.

“I finally made two chocolate decorations – a red one and a green one, you guessed it – inspired by two colours of this Japanese leaf. From the looks of it, it seems like it would be a rich cake. But somehow, despite its appearance that says otherwise, it feels really light in your mouth. Shiso adds its freshness to the cake. It is amazing to find various textures and flavours, all harmonized into one bite. While I used both aojiso and akajiso in this cake, I also wanted to add a French touch to it, so obviously I chose basil!”

The Charm of Shiso: Flavourful, Aromatic, and Medicinal 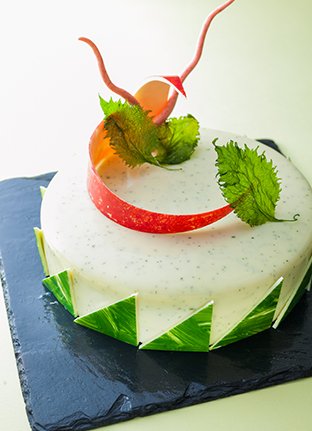 In addition to its delicious properties, shiso has been known as food preservative and disinfectant. This is why we often see shiso on the side of sashimi plate, to keep everything fresh. “Shiso is also good for your kidneys!” adds Chef Dominique with a smile. “It is delicious and has a good aroma, but not only that, it is also a medical herb. This is why I chose to work with shiso. Whenever I choose an ingredient, I think of its taste, of course, but I always keep in mind how it affects our health.”

In fact, Chef Dominique is interested in ecology. Everybody at school knows that he does not like wasting paper towels and using disposal piping bags. He also likes making people happy and this spirit is reflected in his cake creations. When he bakes, he envisions the pleased expression on the face of the person who eats it.