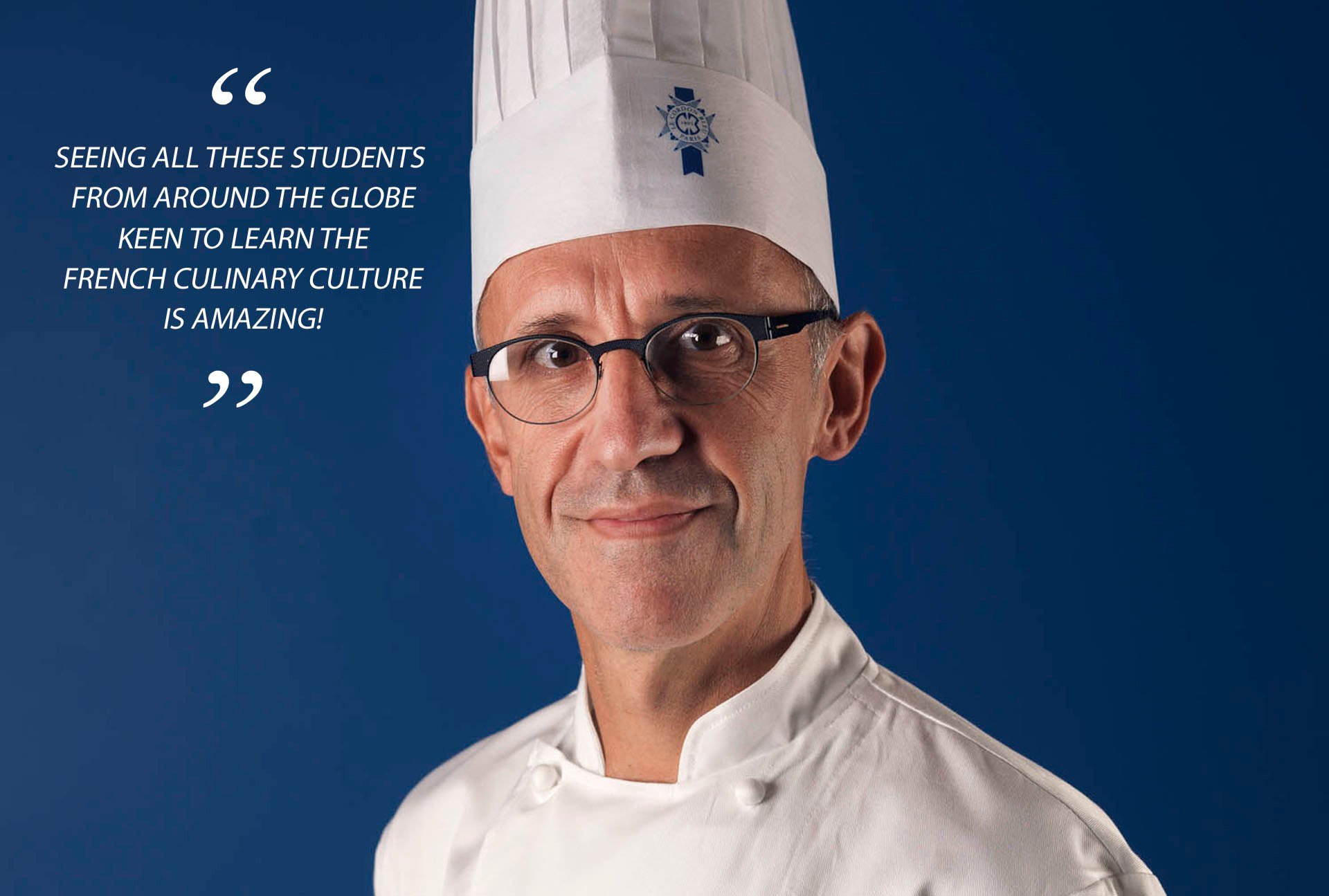 September 2018 - Eric Verger became passionate about pastry as a child after spending his spare time in a patisserie lab. He went on to work in labs, as a pastry chef in Michelin-starred restaurants, for caterers and even opened his own patisserie before launching a career in teaching. He tells us the whole story!

How did you become a pastry Chef? Where did your passion come from?

Born in Angoulême, in the Charente, I grew up in a busy shopping district. At the age of 13, I discovered the lab of a patisserie I frequently visited. I beat eggs, rolled out dough and, one day, the pastry chef let me make my first genoise sponge.

At the age of 14, my passion for the profession was stronger than ever and I decided to take a CAP, in tandem with an apprenticeship. For 4 years, I was trained by chef Prot, who taught me his passion, values and love of the pastry chef profession.

After my CAP, I spent 3 years taking my Brevet de Maîtrise in Tours. I followed evening classes and worked at a leading patisserie, Maison Poirault, also in Tours. I then worked in a 2 Michelin-starred establishment, the Relais de Bracieux, in Blois. It was my first job after completing my studies and I remained there for 2 years.
I then decided to open my own pâtisserie and bakery in Château du Loire which I ran for 7 years. This enabled me to push myself and put everything I had learnt into practice in order to delight my customers. When I make a cake, I want people to be amazed, to round off their meal with a touch of magic!
It was 1996 and I moved to Paris, working for 1 year at Lenôtre before moving on to Kaspia Réceptions (an events caterer) for 5 years, where I took on my first role as pastry chef.
Lastly, in 2002, I created a training session MCCDR (an extra qualification in plated desserts) at Albert de Mun High School. During 5 years I taught youngsters the techniques for making plated desserts.
My career path led me to join the pastry Chef team at Le Cordon Bleu Paris institute in 2016. I have also taken part in several competitions during my career and was awarded the pastry Toque d’Or in 2015. My aim was to take on new challenges and reach new heights.

As my career progressed, I became increasingly interested in passing on my knowledge to future generations. I have always trained apprentices but decided to dedicate all my time to teaching in 2002.

I give theory classes, known as demonstrations, at Le Cordon Bleu, but also practical classes and gourmet workshops in pastry. Seeing all these students from around the globe, keen to learn our culinary culture, is amazing!
In addition, I work on recipes with reduced sugar content to enable individuals with diabetes to enjoy delicious desserts.

What advice would you give to somebody who is thinking of becoming a chef? What are the essential qualities?

You will leave the school with all the key skills. It is then vital that you begin working alongside pastry chefs, in order to continue learning. It is essential to train yourself so that you can go on to train others. Initially, I would suggest beginning in production; join a kitchen brigade so that you can really understand the nature of the profession.

To be a pastry chef, you must possess a great deal of discipline, courage and perseverance.

The capital of gastronomy in the world? Paris

One Chef, if you could only choose one? Gaston Lenôtre for his simplicity

An anecdote about your career? When I was an apprentice, the lab was located downstairs. I was climbing the steps with a tray of rum babas and fell. To make sure I didn’t get told off, I pretended that my knee was really painful all of a sudden.