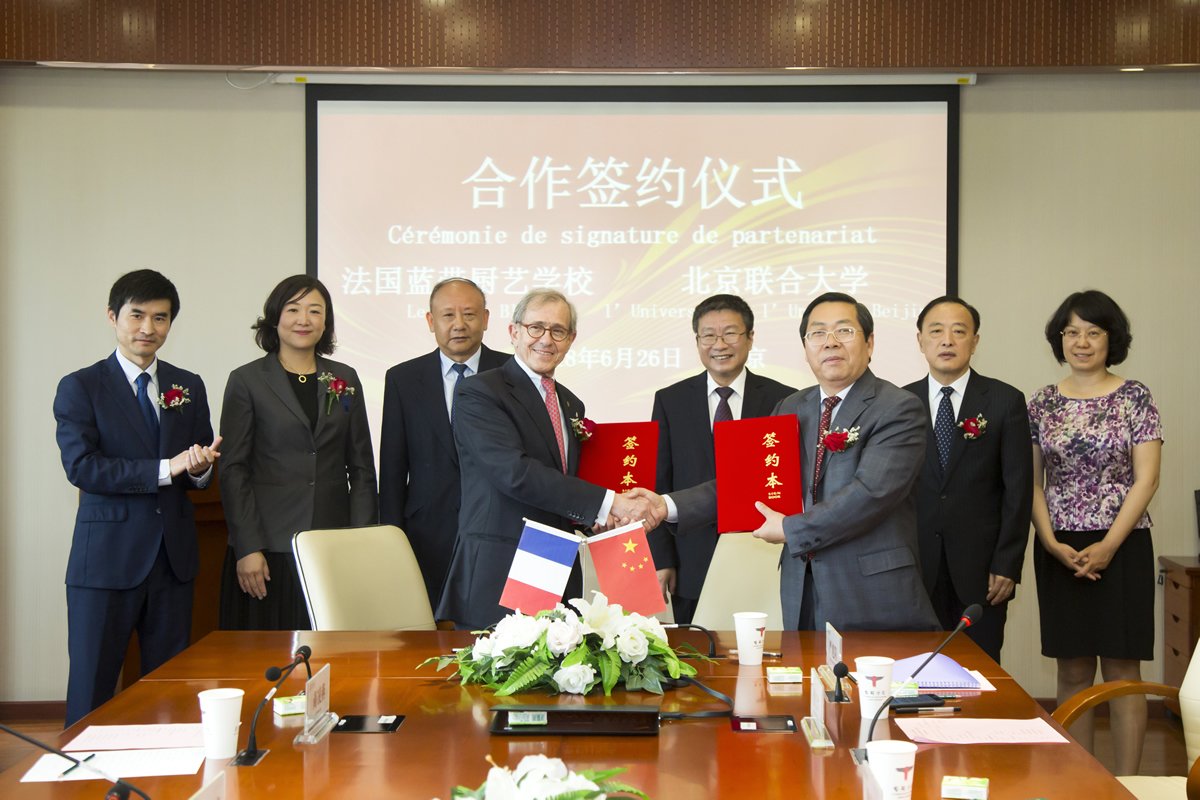 This partnership in Beijing, which is aimed at talented young Chinese and International students looking to start careers in gastronomy and hospitality industries, aims to prepare them through a variety of specialized programs. This momentous agreement has confirmed the implementation of culinary and management educational programs including Cuisine, Patisserie, Culinary Management, Wine and Gastronomy, Bakery, Restaurant Management; in addition to short courses and professional development modules that will be introduced in accordance with market needs through a new joint entity that will operate the Le Cordon Bleu Beijing Culinary Arts Academy within TCBUU’s main campus. 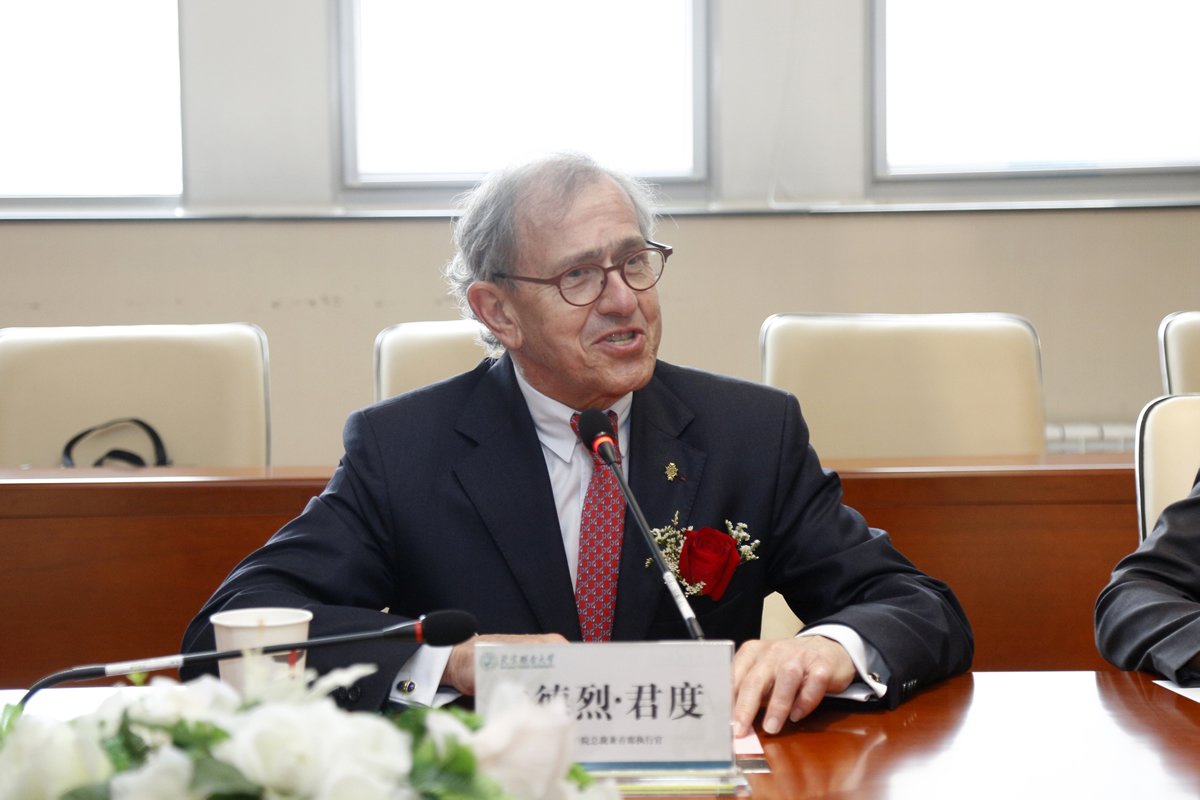 The major purpose of the MOU is to promote mutually beneficial cooperation between Le Cordon Bleu and TCBUU in various fields such as Restaurant and Hospitality Management, Culinary Management, Wine Management, Gastronomy, and Nutrition at undergraduate and postgraduate levels.

“After our success with our institute in Shanghai, now with over 500 students per year, this impressive partnership with TCBUU and Le Cordon Bleu will provide Beijing with world class culinary training and I couldn’t be more thrilled to be here,” states Mr. Andre Cointreau, President of Le Cordon Bleu, as he is delighted to be working with TCBUU to bring Le Cordon Bleu to Beijing. “ 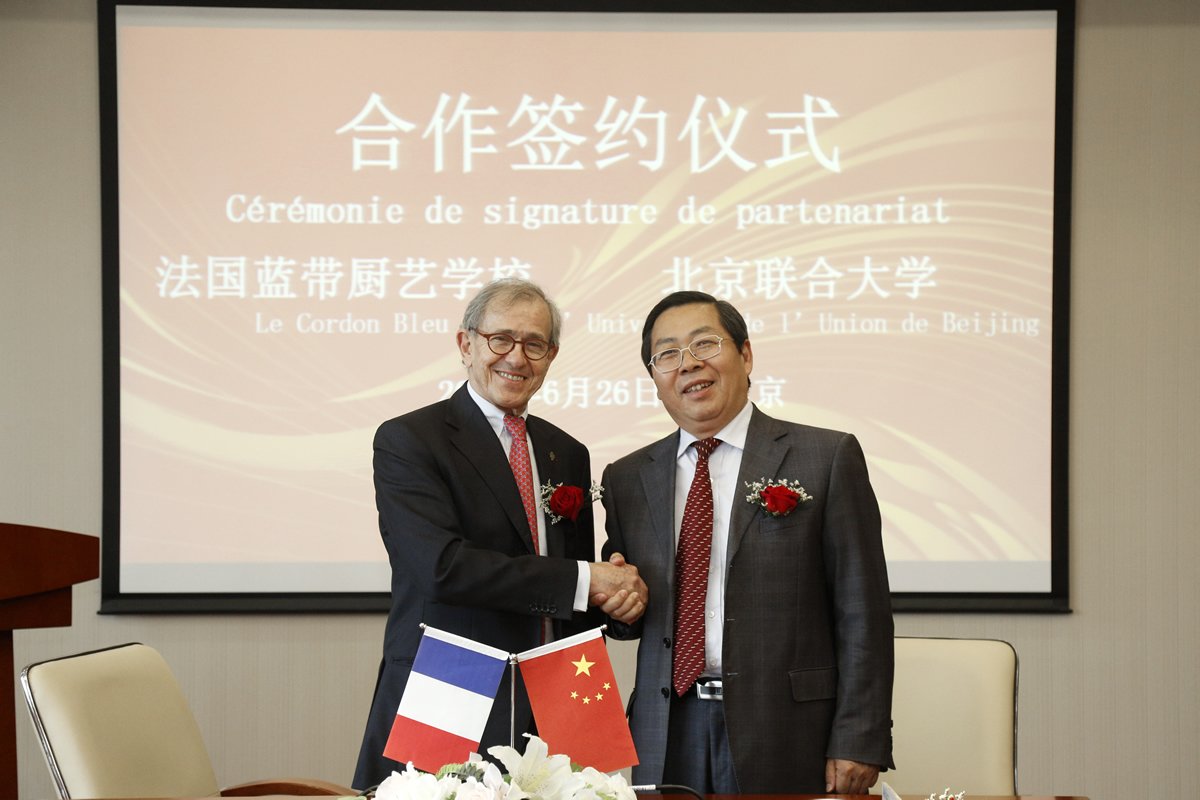 “BUU hopes through Le Cordon Bleu’s strong International network and professional training, that our students not only blossom in China but also globally,” says Mr. Li Xuewei, President of BUU and confirms BUU will facilitate and support the Le Cordon Bleu Beijing Culinary Arts Academy through all the creation stages.

The educational program stemming from this new agreement underlines Le Cordon Bleu’s commitment to innovation and best practice in gastronomy, hospitality and management. The program will combine domestic and International resources to develop and research educational training, while also designing a system for embracing the best of Western and Chinese cuisine to give its graduates a competitive advantage in the International culinary environment. 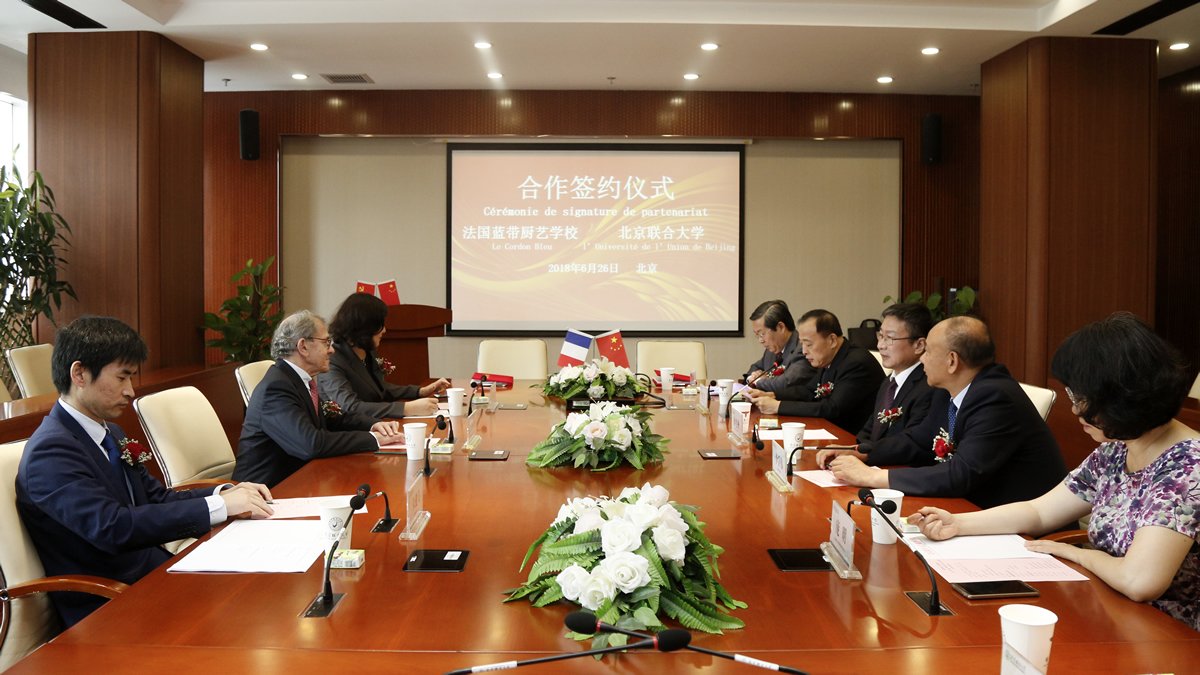 The new agreement also represents a forward-thinking mentality from Tourism College of Beijing Union University, a higher education institution established in 1978 under jurisdiction of the Ministry of Education with a mandate to train top talents in the area of tourist management in China. Tourism College of Beijing Union University, located in Beijing, the capital city of China, is greatly respected for its excellence in hospitality education. It offers a range of educational programmes at undergraduate and graduate level, together with part-time and short courses for continuing education and extension education, as well as a professional academic journal, “Tourist Journal,” which has the highest authority in the tourism industry of China.

Celebrating culinary excellence is a hallmark of Le Cordon Bleu, one of the world’s leading schools for teaching classical French cuisine, pâtisserie and boulangerie. Since Le Cordon Bleu was established in Paris, France in 1895, the organisation has earned fame and respect for maintaining the highest standards of culinary excellence. Each year, more than 20,000 students from 100 countries are trained at Le Cordon Bleu’s Institutes, which now stretch through 20 countries with more than 35 schools, in: Paris, London, Madrid, Istanbul, Beirut, Tokyo, Ottawa, Seoul, Kuala Lumpur, Wellington, Sydney, Bangkok, Mexico City, Lima, Shanghai, Rio de Janeiro, Turkey, Kaohsiung, India, Philippines, Chile, Fortaleza, Belo Horizonte and Sao Paulo. Additionally, Le Cordon Bleu has been selected by the government of China to become the Cuisine and Pastry Training Center for the 2021 World Skills Competition.

Always looking ahead, Mr. Cointreau is especially ecstatic that these culinary educational opportunities and important connections to Le Cordon Bleu’s extensive International network of educational operations will now be made available to the passionate leaders of tomorrow in Beijing, China. He believes the arrival of these new programs with TCBUU marks another significant landmark in Le Cordon Bleu’s long, proud and very successful history.

Le Cordon Bleu extends its warmest congratulations to Her Majesty Queen Elizabeth II on the event of her Platinum Jubilee. To celebrate the occasion, our Le ...

This elegant duck dish created by Le Cordon Bleu master chefs is the perfect main for a warm spring evening.