Get the Scoop: A Day in the Life of a Head Ice Cream Maker 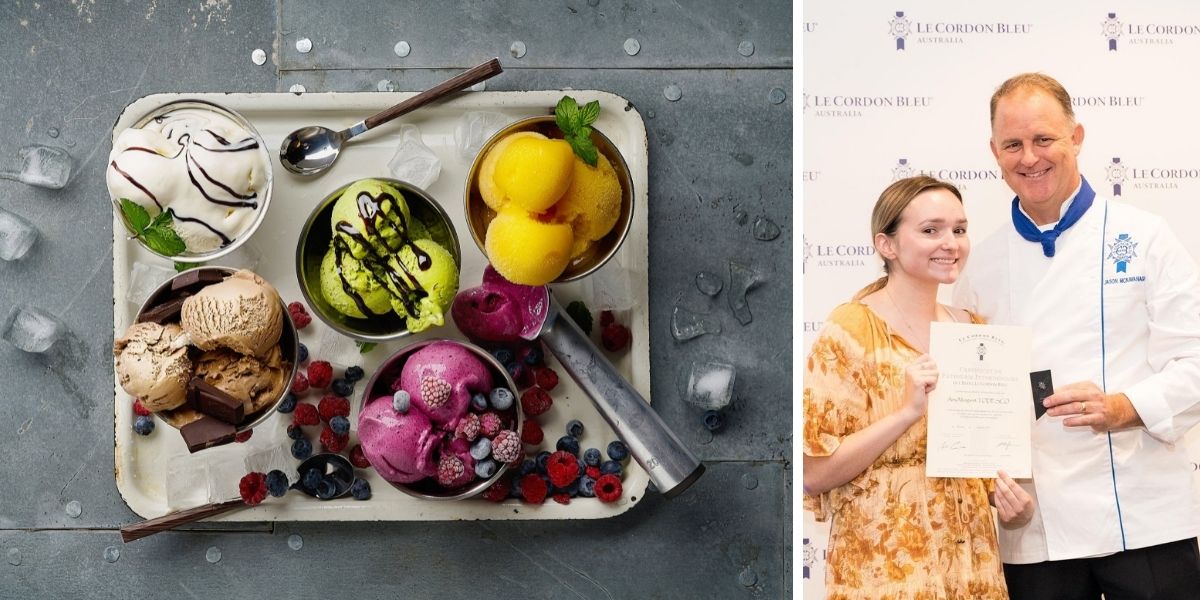 Le Cordon Bleu Brisbane Alumna, Amy Todesco, has given us the ‘scoop’ on what it’s like to be a Head Ice Cream Maker in Canada. Read about what makes a good ice cream and learn about Amy’s journey from Canada to Australia, and back!

Why did you choose to study at Le Cordon Bleu Brisbane?

After I finished school in Canada, I moved back to Australia to study a Diplome de Patisserie at Le Cordon Bleu Brisbane. I chose to come back to Brisbane because I had never really gotten to experience living in Australia. I was so young when I left with my family. I knew I wanted to study at Le Cordon Bleu and was happy to see there was a campus in Brisbane. Also, I grew up in Calgary [Canada] where it gets into the -40°C in winter, so the weather in Australia is a big plus!

The reputation that Le Cordon Bleu has really drew me in. How all over the world, there is a Le Cordon Bleu campus. Being able to make those connections across the globe is really important in your career, where you can touch base with the Le Cordon Bleu alumni network in any country.

Why did you return to Canada?

I was living alone in Australia when the pandemic first hit and decided to go back to Canada. The team at Le Cordon Bleu Brisbane were very supportive and said I could do my work placement overseas. They found me a role at Butter Baker in Toronto, Canada. Butter Baker is a classic bakery with a little bit of everything – croissants, Danishes, tarts, pies. The focus was on cakes and specialty cakes. Butter Baker ended up hiring me as a full-time cake decorator. I loved my job there, it was a great experience.

Where are you working now?

I now work at Village Ice Cream, which is a boutique ice creamery in Calgary. I used to work for them as an Ice Cream Scooper before studying in Australia. Then the opportunity came about for me to apply for the Kitchen Manager position, so I am now the Head Ice Cream Maker at our main location. I love it, I was in the kitchen all summer making ice cream! 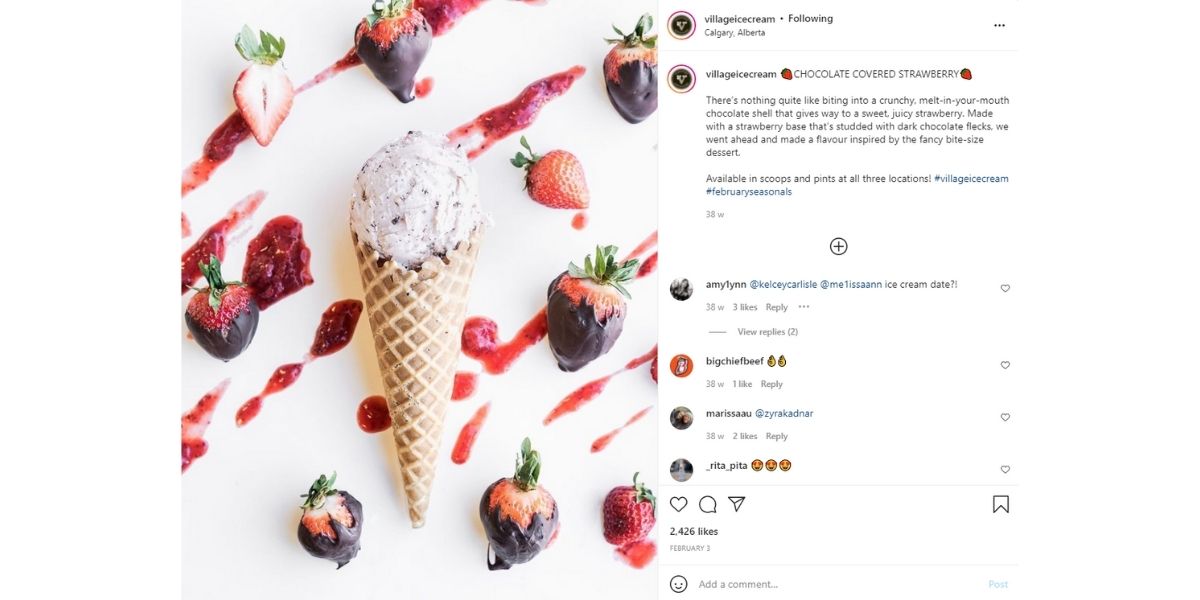 What does a day in your life look like?

I usually start at 7am and I’ll check our stock and inventory. On a typical day, I’ll be making ice cream all day. Each month we have our seasonal specials, so I make the special ingredients as well, like cakes, cookies or chocolate-covered pretzels depending on the seasonal flavour. I would love to create some Australian-inspired flavours, like a lamington or something. Probably not vegemite though [laughs]. There is a vast variety with what I get up to in the day but overall, I’ll blast music and make ice cream! It’s a lot of fun.

What is the process of making ice cream?

We use a basic cream mix in an ice cream machine and then depending on the flavour, we add the flavour elements to that cream mix. For example, one of our seasonal specials for this month is called Mini Doughnut. For this flavour, we use our ice cream base and add a good quality vanilla to it. Then I’ll make the doughnut cake, add cinnamon sugar, then plunge it to mix everything in. It’s very high production and pretty fast-paced. We also make our own pints of ice cream. Everything is small-batch and hand made. It’s quite an intimate environment which is why we have such a following in Calgary. We are known for our ice cream being hand-made and you can even tell who’s made what.

What is the biggest misconception about being a Head Ice Cream Maker?

I would say the biggest misconception is that I just eat ice cream all day long. As much as I would love to, you kind of get sick of it after a while. Another misconception is that it’s just a simple job, or that all I do is scoop ice cream. But there is actually quite a lot that goes into making ice cream that you wouldn’t typically think of. You work long hours and there is a lot of production, but when you love what you do it doesn’t really matter.

What makes a good ice cream?

The extracts and ingredients that you put in are what makes or breaks an ice cream. Ensuring that the flavours and special elements aren’t fake ingredients or artificial is very important. The type of vanilla you are using or the fruit you are putting into it needs to be high quality. 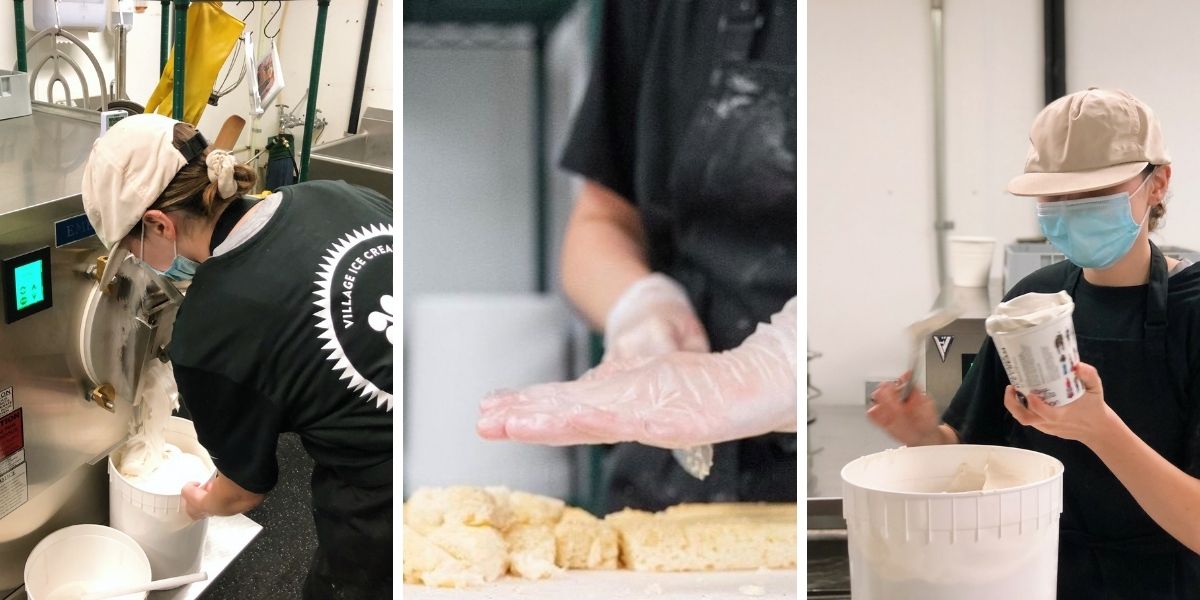 What are your goals for the future?

In future I would love to travel with my job, I think that’s the greatest thing about the industry. Hospitality is such a universal language, so you can go anywhere in the world. My dream is to move to Europe and go work in France and gain experience in pastries, like croissants etc.

What are your top three tips for someone who wants to move and study in Australia?

1. Keep an open mind. Canada and Australia have quite similar cultures but even for me, it was still a bit of a culture shock. So, my advice is to just take it one step at a time and stay open minded.

2. Be prepared for the weather change! The weather was one of the biggest shocks for me when I arrived in Brisbane. It gets so hot and the humidity is so different compared to Canada.

3. Take all the opportunities which come your way. One of the most important things about the hospitality industry is getting a head start with Le Cordon Bleu to build connections and stay involved. This will open the doors for you to take all the opportunities you can. At Le Cordon Bleu, that’s what I found helped me get the furthest. Anytime they needed volunteers or had an opportunity, I was always putting my hand up to get involved.

Perfect your pastry and take your baking skills to the next level with Le Cordon Bleu Australia: