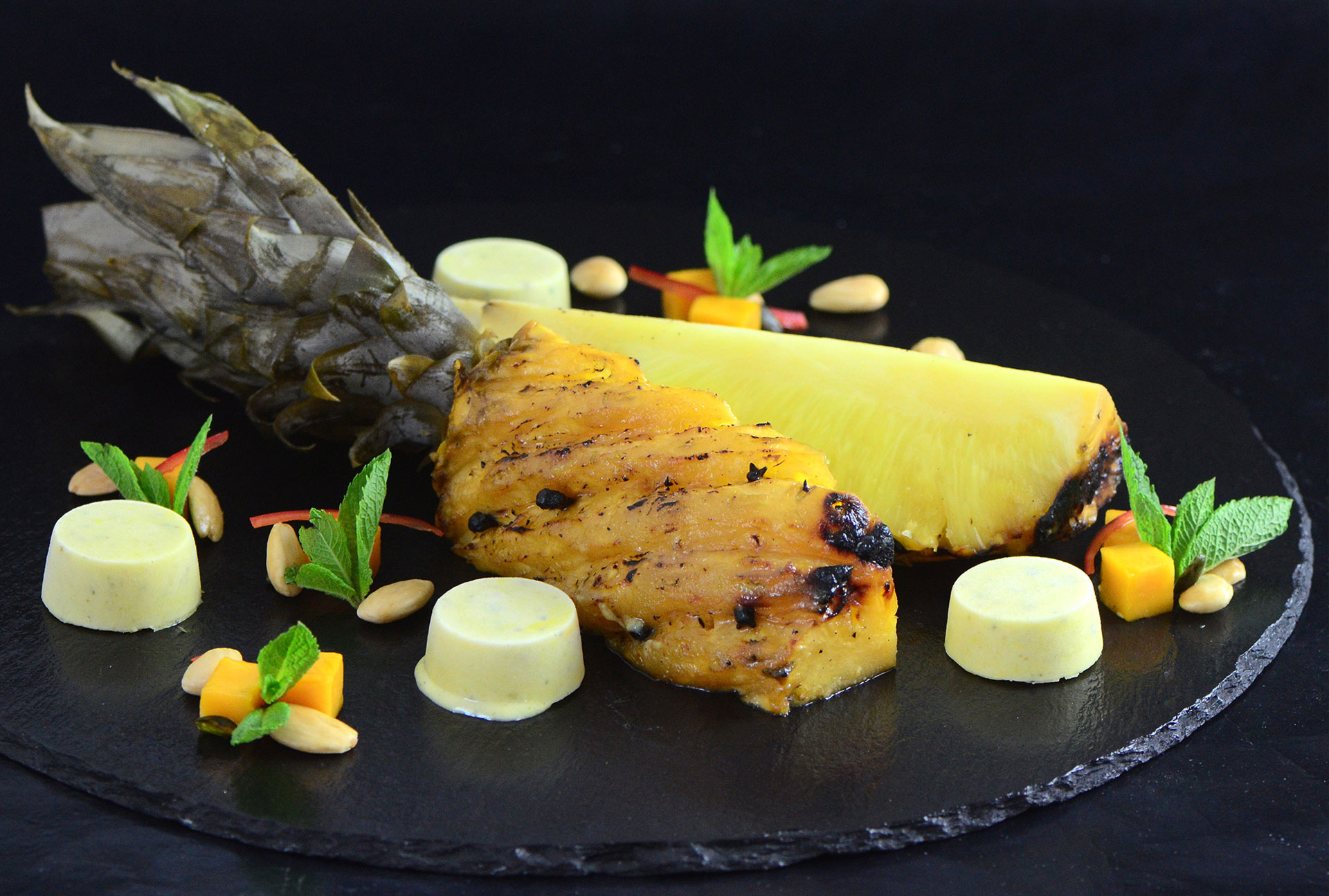 This summery dessert contrasts the heat of the barbecued pineapple, heightened by spices, with the sweet, cool and nutty kulfi.

2. Peel the pineapples leaving the green top intact. Remove the small eyes of the pineapples by carving diagonal shallow channels either side of the eyes using a knife. Place a skewer through the length of the pineapples. Dampen a cloth and wrap around the leaves, then wrap with tin foil and secure with a couple of pieces of string.

3. Glaze: Melt the butter in a saucepan and add the soft brown sugar, crushed cinnamon and star anise. Bring to a gentle simmer to infuse. Once the sugar has dissolved remove from heat and add the rum. Reserve a few slices of chilli for plating and transfer the remainder into the glaze.

4. Stud the pineapples with cloves and brush with the glaze.

5. When the barbecue is ready (ensure that the coals have stopped flaming and that they are white hot) suspend the pineapples over the coals and continually baste with the glaze. Rotate the pineapples regularly until it is golden in colour and cooked. Remove pineapple from the skewer and unwrap the green leaves. Carve each pineapple into quarters and brush with a little of the remaining glaze.

6. Kulfi: Pre heat oven to 180°C. Put the milk into a heavy bottom saucepan and slowly bring to a simmer. Reduce the heat to the lowest setting and stir continuously to avoid the milk from burning until it has been reduced by half (500 ml). Add the caster sugar to the reduced milk and dissolve, then allow the milk to cool.

7. Toast the almonds and pistachios in the oven until golden. Reserve a few whole almonds for decoration. Allow the remaining nuts to cool and blend until a fine smooth paste is achieved.

8. Peel the mango and cut the flesh away from the stone. Cut some of the mango into dice and reserve for decoration and roughly chop the remaining mango flesh then blend until a smooth puree is achieved.

9. Place the cornflour into a small bowl and add three tablespoons of milk to the cornflour and mix to form a paste. Combine this paste back into the rest of the milk. Bring the milk back up to a gentle simmer to thicken, stirring constantly. Once the milk has thickened, remove from the heat and add the almond and pistachio paste. When the milk has cooled again, add the saffron and mango puree.

10. Pour the mixture into moulds and freeze for approximately 6 hours.

11. To remove the kulfi from the moulds, dip the mould into hot water for a few seconds, run a knife around the inside of the mould and turn out.

Enter the world of plant-based ingredients and indulge in this sweet and fruity tart. This recipe is a taster from the Certificate in Plant-Based Pâtisserie ...

This delicious winter warmer is a celebration of British seasonal ingredients. The butternut squash paired with the red wine sauce is a delightfully comforting ...