August 29th, 2012 is a day Le Cordon Bleu President, André Cointreau, will never forget. On this day, he was honoured as an important figure of the Prefecture of Hyogo by its Governor, Mr. Toshizo Ido, and presented with a prestigious cultural award for his various contributions to the development and internationalization of the region.

Le Cordon Bleu Chef instructors first opened Apriti Sesamo in Kobe as French culinary classroom. However, as a result of an initiative to make classes offered in Kobe official Le Cordon Bleu courses, Cuisine and Pastry courses came directly from the Paris school, and official classes from the Le Cordon Bleu were announced in Japan for the first time.

Unfortunately, this initiative between Le Cordon Bleu and Kobe was interrupted in 1995, by the Great Hanshin Earthquake.

"It was beyond my imagination and heartbreaking, the devastation, but what was most surprising to the French people was how quickly the city of Kobe recovered after the disaster," Cointreau recalled thinking at the time. 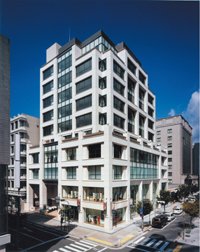 Originally an important coastal port connecting mainland China and other nearby harbours, Kobe was already well equipped to handle the influx of foreign ships upon its official opening as a trade port at the onset of the Meiji Period in 1868. A special ward for foreign residents was established, and along with the development of the city itself, the cuisines and pastries of the West and of China began to spread through Japan.

If Yokohama served as the focal point for American shipping routes, then Kobe was its European counterpart, and European culture began to take root there. Famous chocolatiers, Goncharoff and Morozoff, opened shops in Kobe in 1923 and 1926 respectively, and it was a big step forward for foreign confections in Japan. The French culinary culture that Le Cordon Bleu is trying to convey is "l'art de vivre", literally meaning "art of living". The implication is that gastronomy is a lifestyle and this concept was well received in Kobe. Choosing Kobe as the hub in Eastern Japan was because of this attitude of receptiveness to foreign cultures.

André Cointreau remarks that even though Le Cordon Bleu currently operates all over the world, its foundations were built in Japan. The global development of Le Cordon Bleu is a result of a strong relationship between site and school, much like that of the Kobe campus and the Hyogo Prefecture. Going forward, this type of cooperation and mutual exchange of cultures will continue to be invaluable as Le Cordon Bleu continues to take French gastronomy farther around the world.