Le Cordon Bleu Istanbul, the world's most prestigious culinary arts school which provides education in cooperation with Özyeğin University in Turkey, celebrated its 10th anniversary. The launch, which took place at the French Palace under the auspices of France's Ambassador to Turkey, Hervé Magro, was marked by the magnificent tastes created by Le Cordon Bleu students and the outfits designed by Vakko ESMOD students which were decorated with chocolate works by Le Cordon Bleu graduates. 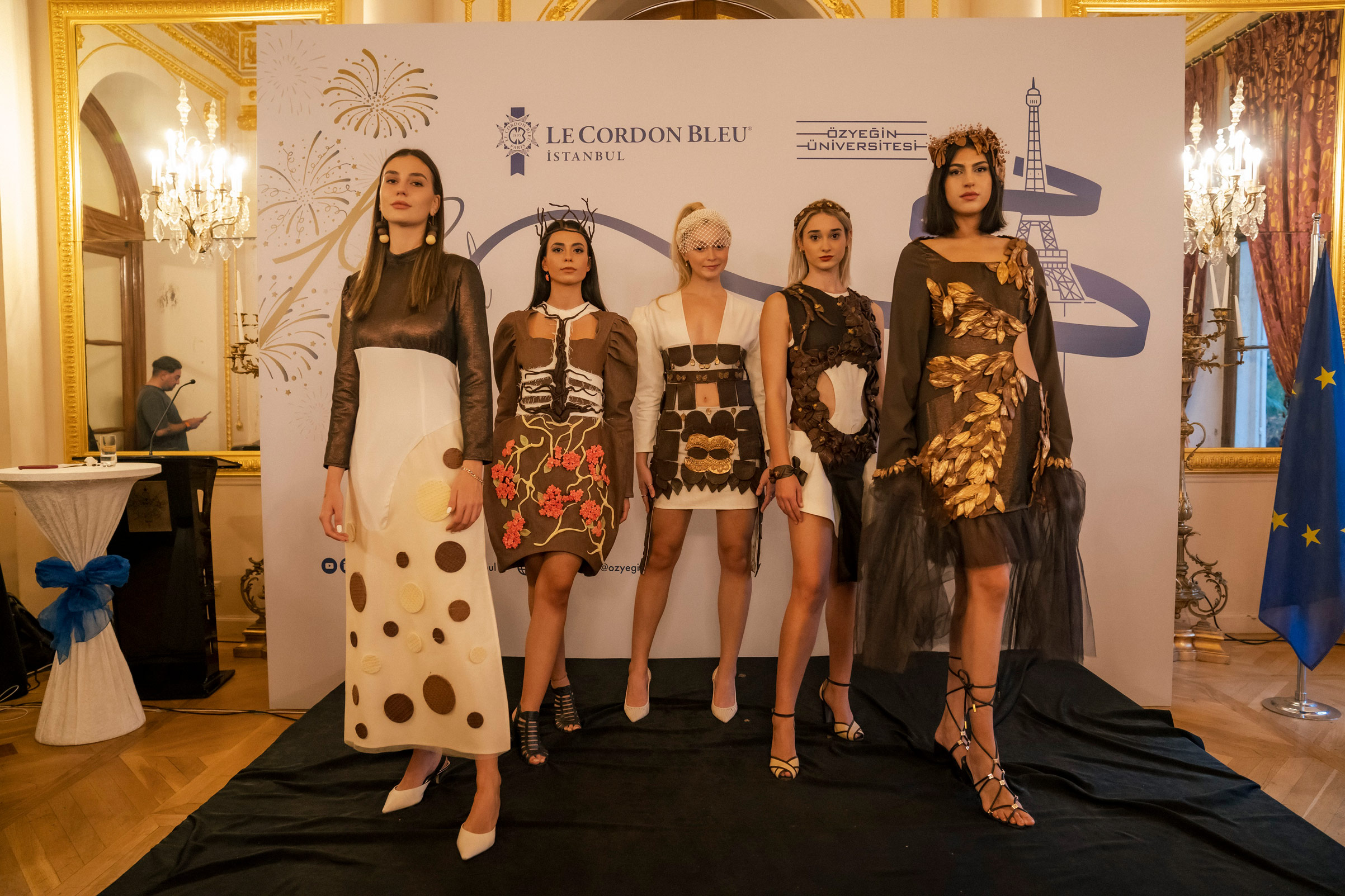 Students from 43 different countries were awarded the "medallion” of culinary arts
Le Cordon Bleu, which has a history of 127 years in culinary tradition and excellence, launched its Gastronomy and Culinary Arts Undergraduate Programme in Istanbul for the first time in 2012. During these 10 years, Le Cordon Bleu offered students the opportunity to receive training from recognized international instructor chefs. In Istanbul, students from 43 different countries, from Honduras to Iran, from New Zealand to Pakistan, were trained in culinary and pâtisserie programmes, which is open to anyone who wants to excel in techniques and delicacies.

Upon completion of the programme, students are awarded with the internationally recognized, prestigious Le Cordon Bleu diplômes. Within 10 years, the certificate programmes has been attended by 670 students and 1838 certificates were awarded. Graduates have either established their businesses, started their master's and doctorate studies or are working in valuable food and beverage brands in Turkey and many different countries. 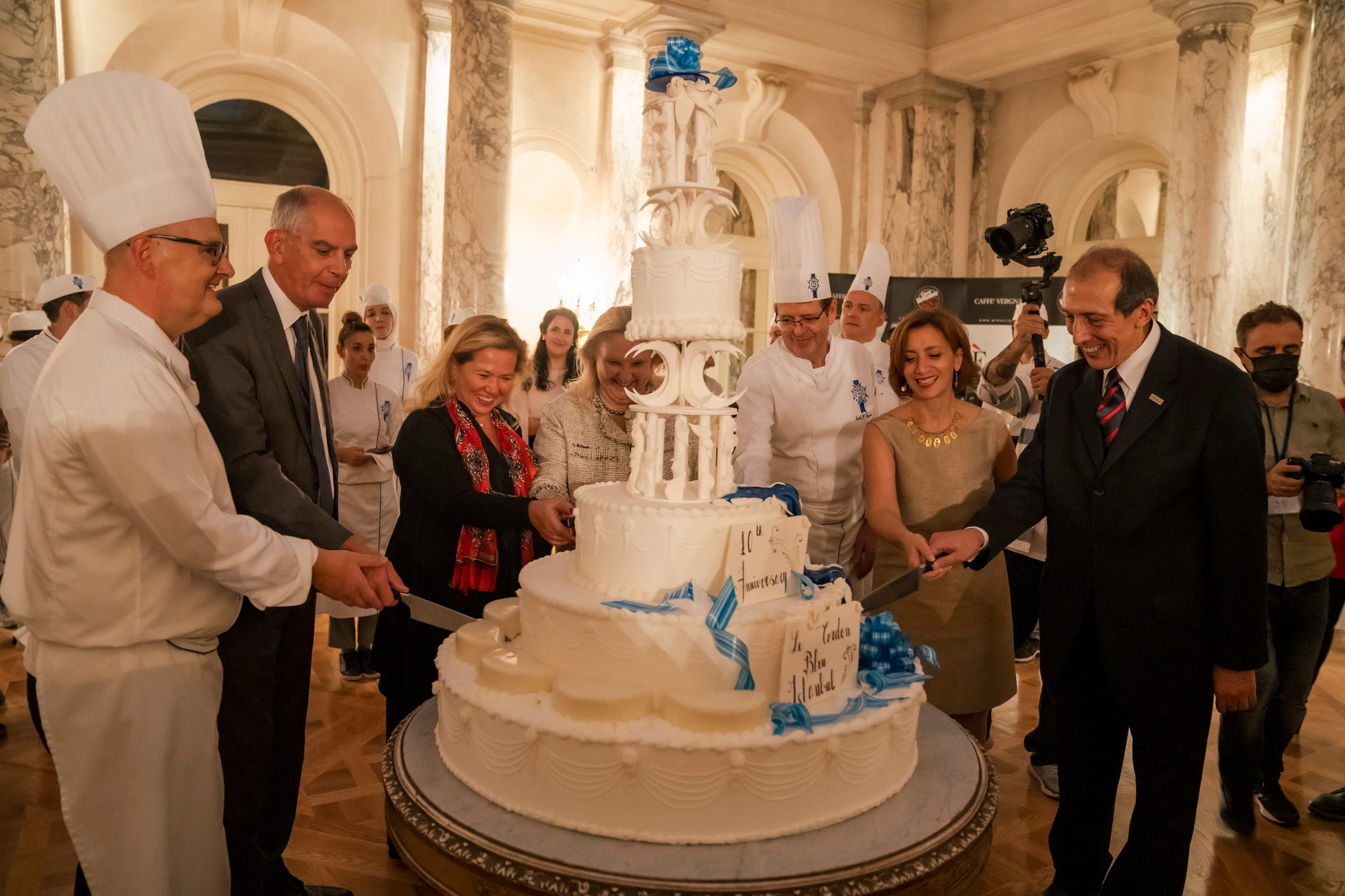 Hervé Magro
, the French ambassador to Turkey, gave a speech at the launch: “I have cut the ribbon at the Istanbul ceremony of Le Cordon Bleu 10 years ago as the French Consul General in Istanbul. What a wonderful coincidence, it is a pleasure to come back to Istanbul, this time as the Turkish Ambassador, to celebrate its 10th anniversary with you. On the 10th anniversary of this success story, first of all, I would like to congratulate their education and their students who are among the best chefs today. I think that the values represented by Le Cordon Bleu and the values of Özyeğin University coincide. I would like to thank you for your substantial contribution to achieve a better agreement between France and Turkey.”

Defne Ertan Tüysüzoğlu, who stated that the arrival of Le Cordon Bleu in Turkey paved the way for Turkey to advance in gastronomy, shared the following information about the activities carried out for the 10th year anniversary: ​​“This year, to crown our 10th year we have launched a Turkish Cuisine certificate programme, and we are happy to give our first graduates. In addition, we organized free online master classes with our alumni living all over the world. Again, we share the recipes of our various graduates on social media, especially for the 10th anniversary aiming to prepare a digital cookbook with these recipes.

"In our 10th year, we aimed to give back to our community and we especially cared to include young people into our sharings. Therefore we are organizing free master classes on our campus for gastronomy clubs of various universities and young chef organizations. Our most important mission is not only educating our students but also help development of all food and beverage industry stakeholders and the success of Turkish gastronomy."

Mehmet Teoman Alemdar, deputy director of Özyeğin University School of Applied Sciences, told the story of their collaboration with Le Cordon Bleu as follows: “When I met Le Cordon Bleu President André Cointreau on the occasion of a conference we organized in 1997, he stated that he wanted to open a school in Turkey. In the meantime, although different institutions brought offers to Le Cordon Bleu, the cooperation couldn’t take place. When Özyeğin University decided to open a gastronomy and culinary arts undergraduate program, we decided to do it with a strong international partner. In this context, I contacted André Cointreau, the President of Le Cordon Bleu, who has been wanting to enter Turkey for 15 years.

"After two years of construction, studies and preparations, we signed a cooperation agreement in July 2012. In this process, Özyeğin University has become the most valuable 4-year university education programme in its field in Turkey, with the success of the Graduate School of Applied Sciences, Gastronomy, and Culinary Arts undergraduate programme. Among our Le Cordon Bleu Certificate graduates, there are head chefs of 5-star hotels, well-known patisserie and restaurant operators, and celebrity chefs hosting their own television show programmes. From now on, we will continue to bring many young people to the sector with the contributions of Le Cordon Bleu international and the transformative, entrepreneurial, and sustainable education approach of Özyeğin University." 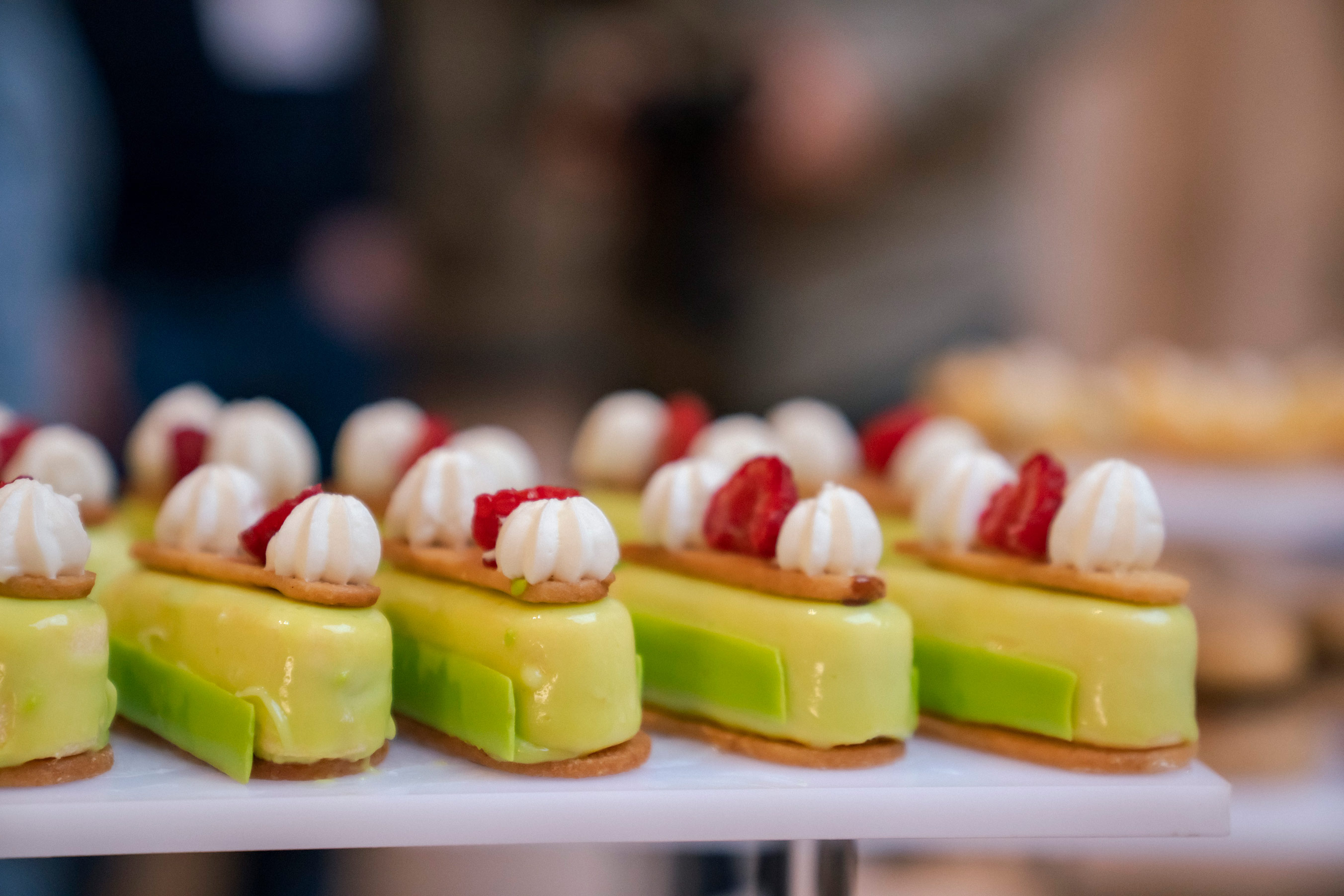 Le Cordon Bleu International Sales and Marketing Director Alienor Cointreau, who began her speech by saying that she is happy to celebrate the 10th anniversary of Le Cordon Bleu Istanbul at the French Palace, stated that they are proud of their rich history of more than 127 years in education. Cointreau briefly gave the following information about the history of Le Cordon Bleu: “Le Cordon Bleu, created in 1895 by a woman, the journalist Marthe Distel, offers all women and men access to culinary education in an environment at the time exclusively reserved for men, thus allowing them to acquire the knowledge and techniques of the great chefs of French cuisine. Le Cordon Bleu today is an ever-expanding network, with more than 35 institutes, in more than 20 countries.”

Stating that excellence is their main goal, Cointreau said, “Our chefs participate in world competitions as juries. If they are not mentors or trainers, they are often winners. Le Cordon Bleu is in partnership with the best universities including Ozyegin, also recognized for its level of excellence. Le Cordon Bleu is also, through its network, a vehicle for celebrating the cuisines of the world. To celebrate 10 years of Le Cordon Bleu Istanbul this year, a diploma dedicated to Turkish cuisine was created. We are proud to highlight great gastronomy, their knowledge and highlight their authenticity. Our ambition to be recognized as a leader in Turkey and that the quality of our training remains at the top are our key objectives. And all of this is possible thanks to our dedicated partners and teams at Le Cordon Bleu. We wish to be together with Le Cordon Bleu for many 10 years and develop extraordinary projects.’’

Özyeğin University Rector Prof. Dr. Esra Gençtürk, in her speech, said, “As an entrepreneurial research university, one of the most substantial examples of our innovative practices such as our strong academic staff, scientific-based applied education model, high value-added collaborations and compulsory work experience that allows our students to develop themselves professionally, is our collaboration between our School of Applied Sciences with Le Cordon Bleu.

"Our value of excellence is to take exemplary and pioneering initiatives, to meet the need at the highest level, and to bring innovation to everything we do. Today, our students and graduates keep both the Özyeğin University name and Le Cordon Bleu name alive and take it forward in many different countries. Celebrating our 10th anniversary is an indication that we have been able to create this lasting impact.”

Özyeğin University Chairman of the Board of Trustees Hüsnü Özyeğin, who stated that "our innovative and entrepreneurial spirit besides their vocational education carries their graduates to an important place in the sector", added, "We aimed to train graduates who will be successful not only in Turkey but also globally. With these graduates, we have Le Cordon Bleu-certified graduates from gastronomy and culinary arts programmes. This summer alone, 156 of our students have completed 140 domestic and 34 international internships, 19 of which were Michelin-starred. Our students go abroad and international students come to us for education.

"This year, our number of international students is 179. Our students also undertake very interesting studies collaborating with the food industry. For example, when you go to Starbucks, you can see four recipes prepared by our students. We offer our students a professional life that is open to development and opportunities within the business world.” 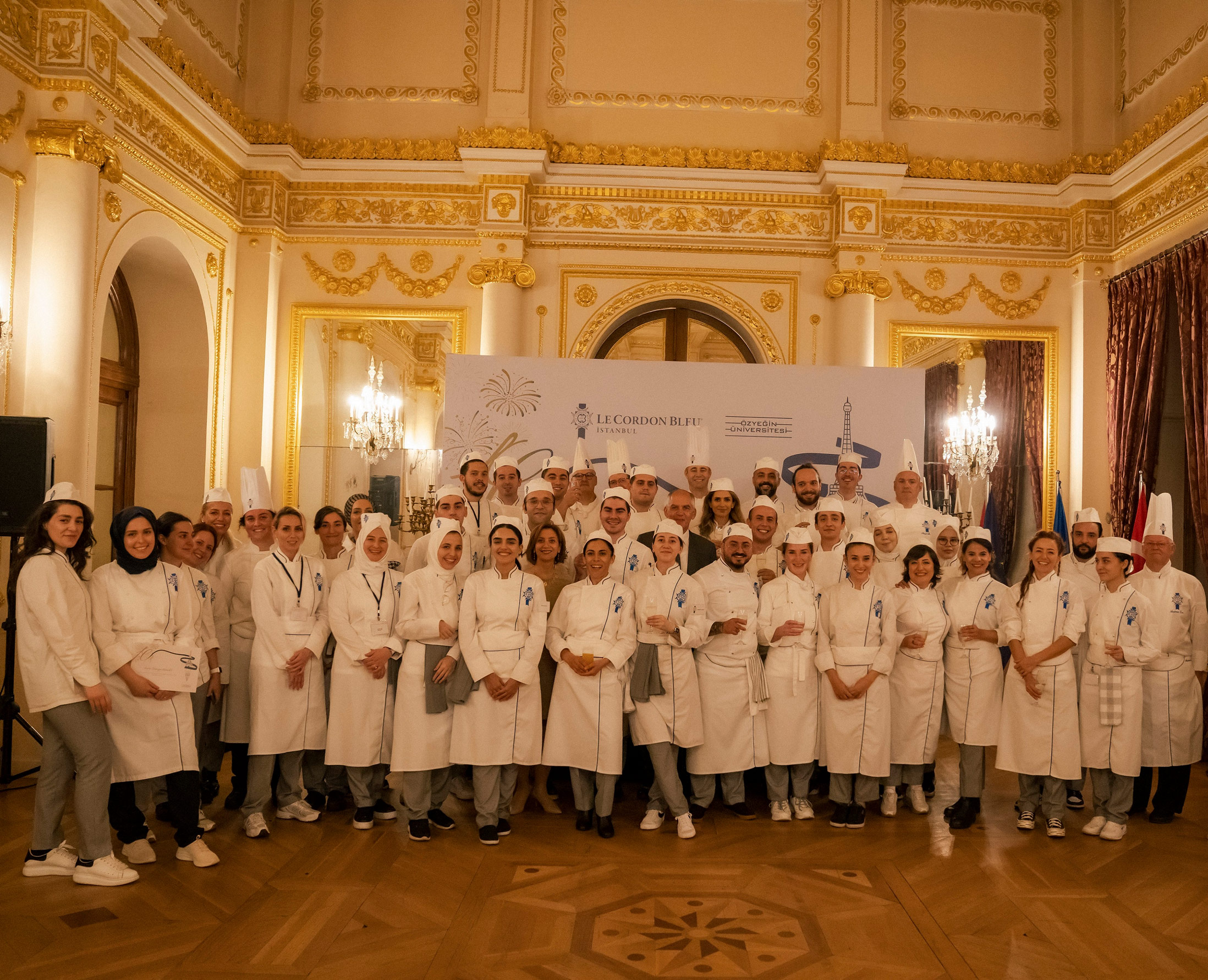