Le Cordon Bleu to open an institute
in Riyadh, Kingdom of Saudi Arabia 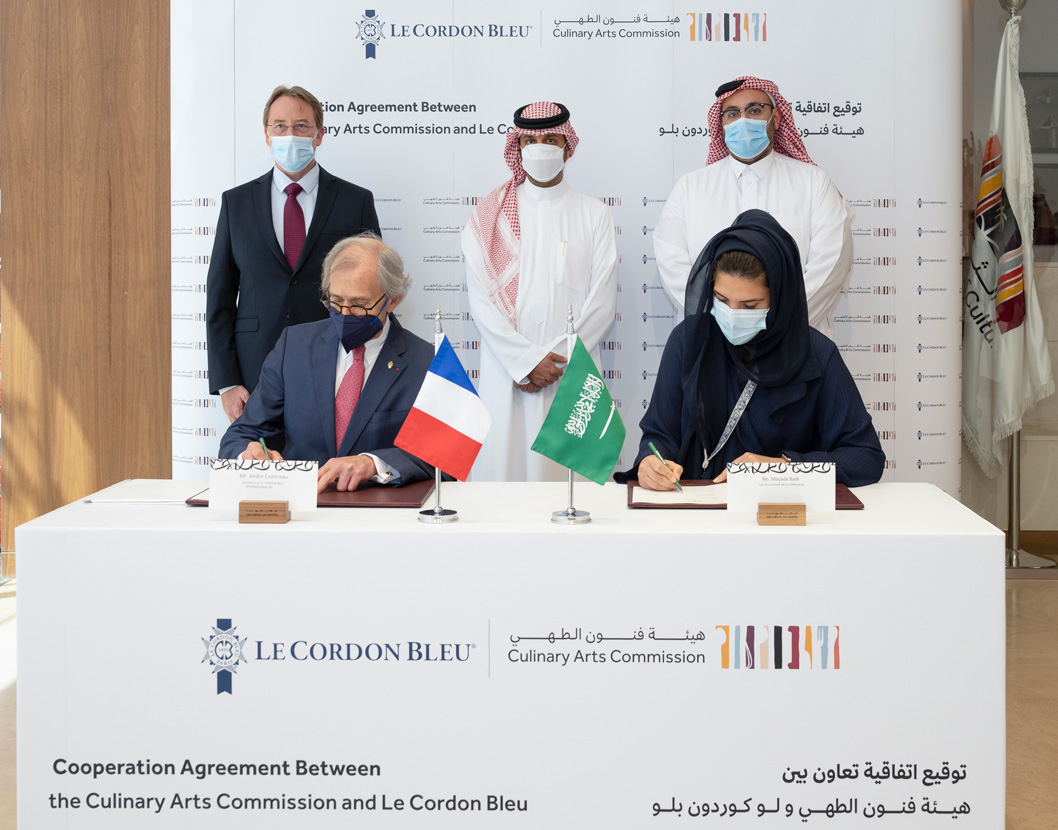 Signature of Cooperation Agreement by the Culinary Arts Commission CEO, Mayada Badr and André Cointreau, President and CEO of Le Cordon Bleu. Were also present his Highness and Excellency the Saudi Deputy Minister of Culture, the Head of Strategy at the Saudi Ministry of Culture, and French Ambassador to the Kingdom of Saudi Arabia.

Le Cordon Bleu, the leading global network of culinary arts and hospitality management institutes, has signed an agreement with the Culinary Arts Commission of the Kingdom of Saudi Arabia, part of the Kingdom’s Ministry of Culture. The agreement to open an institute in Riyadh by the end of 2023 was signed by the Culinary Arts Commission CEO, Mayada Badr and André Cointreau, President and CEO of Le Cordon Bleu.

Le Cordon Bleu in Riyadh is to become an iconic flagship institution for gastronomy, located in state of the arts facilities, with prime equipment and technology, and teaching programmes of the highest standards from technical courses in the culinary arts, such as Cuisine and Pâtisserie Diplomas, to higher education degrees in hospitality management. Students will benefit from a faculty of Le Cordon Bleu Master Chefs, industry experts and professors that have trained in the finest establishments worldwide and share years of experience. Students may also choose to participate in international exchanges benefiting from the many study destinations that Le Cordon Bleu can offer.

Among the curriculum, Le Cordon Bleu will also propose a programme dedicated to Saudi Arabian Cuisine, to highlight the local ingredients, flavours and gastronomy. Present in the biggest gastronomic capitals, Le Cordon Bleu aims to support the Cuisines of the World and has developed many diplomas and certificates to celebrate Peruvian, Brazilian, Mexican, Spanish, Japanese, Thai cuisines. Among these courses, some are accredited by the local education ministry, guaranteeing authenticity and respect for the principles taught.

Le Cordon Bleu is committed to innovation and honours its commitments through an expanding international network of teaching, learning and research. Taking into account innovation and new technologies, Le Cordon Bleu continually adapts its academic programmes to the future needs of the industry. Responding to the keen interest in nutrition, well-being, vegetarian cuisine, food sciences, social and environmental responsibility, and the online demand.

Le Cordon Bleu will propose a startup incubator to support and guide graduates who wish to create their own business within the restaurant and hospitality industry. Around the world, Le Cordon Bleu is proud to see its alumni thrive in a variety of different careers, such as Chefs, culinary stylist, caterers, entrepreneurs, app creator, journalists, writers, food critics, award winners and Michelin stars.

Le Cordon bleu is recognized worldwide for its excellence in education providing students with an international passport for a career in the food and hospitality industry, which can be seen by the numerous success stories of its Alumni from Julia Child to Giada de Laurentiis, from Dame Mary Berry to Gaston Acurio, and from Yotam Ottolenghi to Vicky Lau. Le Cordon Bleu students from Riyadh will be part of the exclusive network of alumni, counting over 20,000 graduates every year worldwide.