September 27, 2017 - On 11 August 2017, we accompanied our beekeeper, Charlotte Dumas (Le Miel de Paris - Apis Urbanica), and Chef Groult, Assistant Culinary Arts Director and Head of the Cuisine Department, during honey harvest on the apiary located on the vegetable roof garden of Le Cordon Bleu Paris institute. We take a look back at what harvest involves.

Ensure you have the necessary equipment

To avoid being stung, it is essential to wear protective clothing (beekeeper’s jacket including a hat and veil and gloves). The beekeeper must ensure they bring all the necessary material for harvesting: airtight container for transporting the frames, hive tool, brush, smoker …
The smoker will not be used during harvest to ensure the smoke does not affect the flavour of the honey.

As Charlotte explains, during harvest time, the hive is made up of 3 different elements:

The beekeeper has chosen to store the sealed honey frames in airtight containers. One by one, she removes the frames of honey from the super using her hive tool. She brushes the bees who are buzzing around and places the frames in the containers. All that remains is to head straight to the honey house for the honey to be extracted!

Key facts about the life of a beehive: 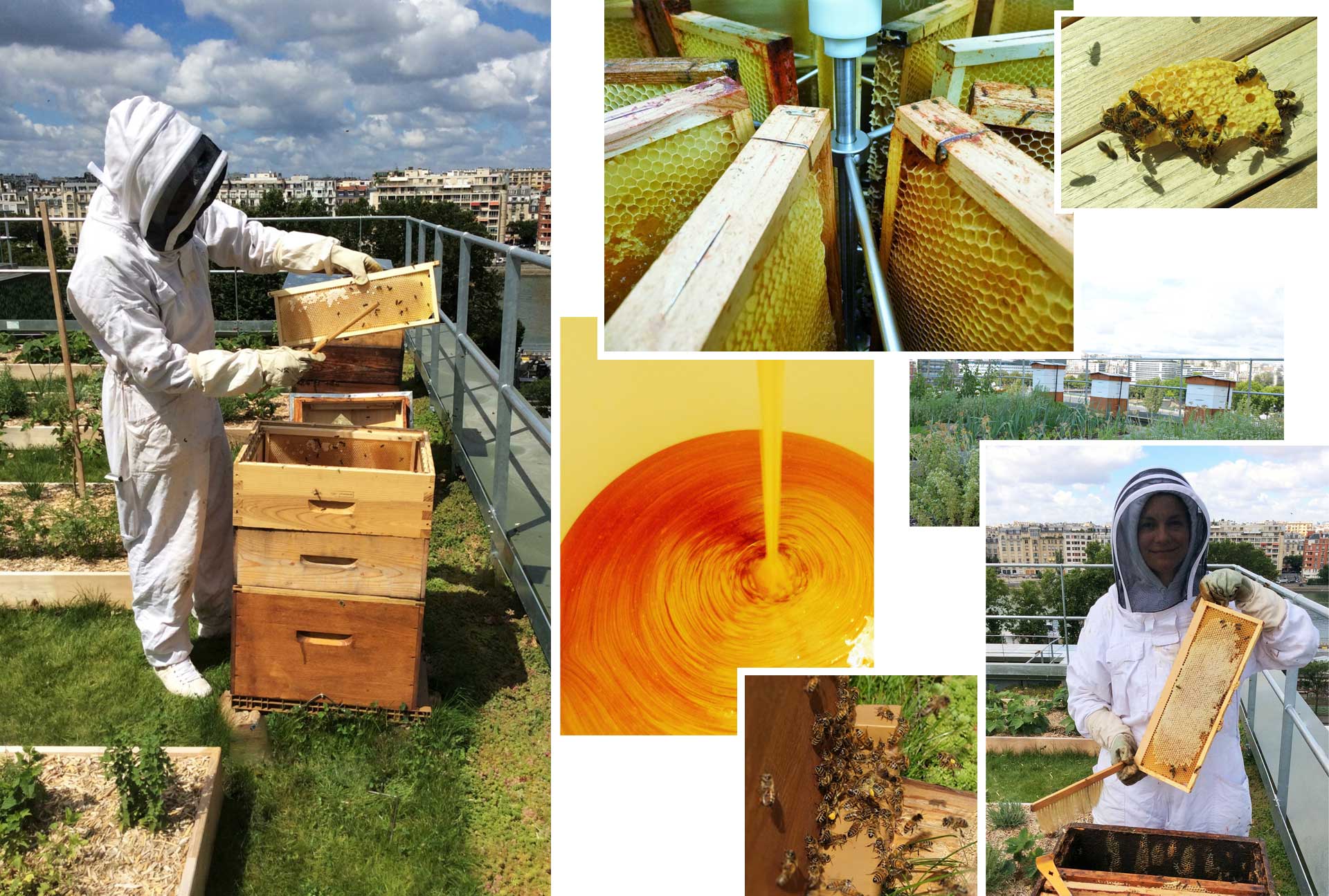 Is Paris honey of good quality?

Yes, several tests carried out in laboratories by beekeepers or their guilds have demonstrated the quality of Paris honey. In addition, as we explain in the article “the life of a beehive”, bees have put a sort of filtration system in place. Before being stored in the hive, the nectar is swallowed and regurgitated by at least two bees.

Checking that the bees are in good health

Once the honey has been harvested, we want to ensure that the bees are in good health. Charlotte, our beekeeper, begins by smoking the top of the frames to calm the bees down.
This enables us to observe the bees’ behaviour and the composition of the frames that make up the hive-box. Some bees bring pollen (a source of proteins) to feed the larvae. Others feed or cap the honey alveoli. Others also take care of the brood.  The predominant brood – the female one – can be distinguished from the male one (which can be differentiated by the way it looks, in relief compared to that of females and much rarer during this period). The development of the brood takes place in 3 stages: eggs, larvae, capped brood.

Some information / Good to know:

Once harvesting has been completed, the frames are taken to the honey house. The beekeeper will extract the honey. Emptied, but still sticky with honey, the frames will be difficult to preserve from one year to another. They are therefore repositioned on the hive in supers to be “licked” by the bees who are incredibly efficient in a matter of a few hours. Meticulously emptied by the beekeeper and cleaned by the bees, the frames are then stored, ready to be re-used during the next beekeeping season.

Learn more
News
An apiary on the vegetable roof garden

With more than 800m² under cultivation, the vegetable roof garden of the new Le Cordon Bleu Paris institute is the ideal home for beehives. It also provides a ...

During the 2017 Fête de la Gastronomie, Le Cordon Bleu Paris will present a round table to illustrate the theme “Products from the city centre”.