An apiary on the vegetable roof garden 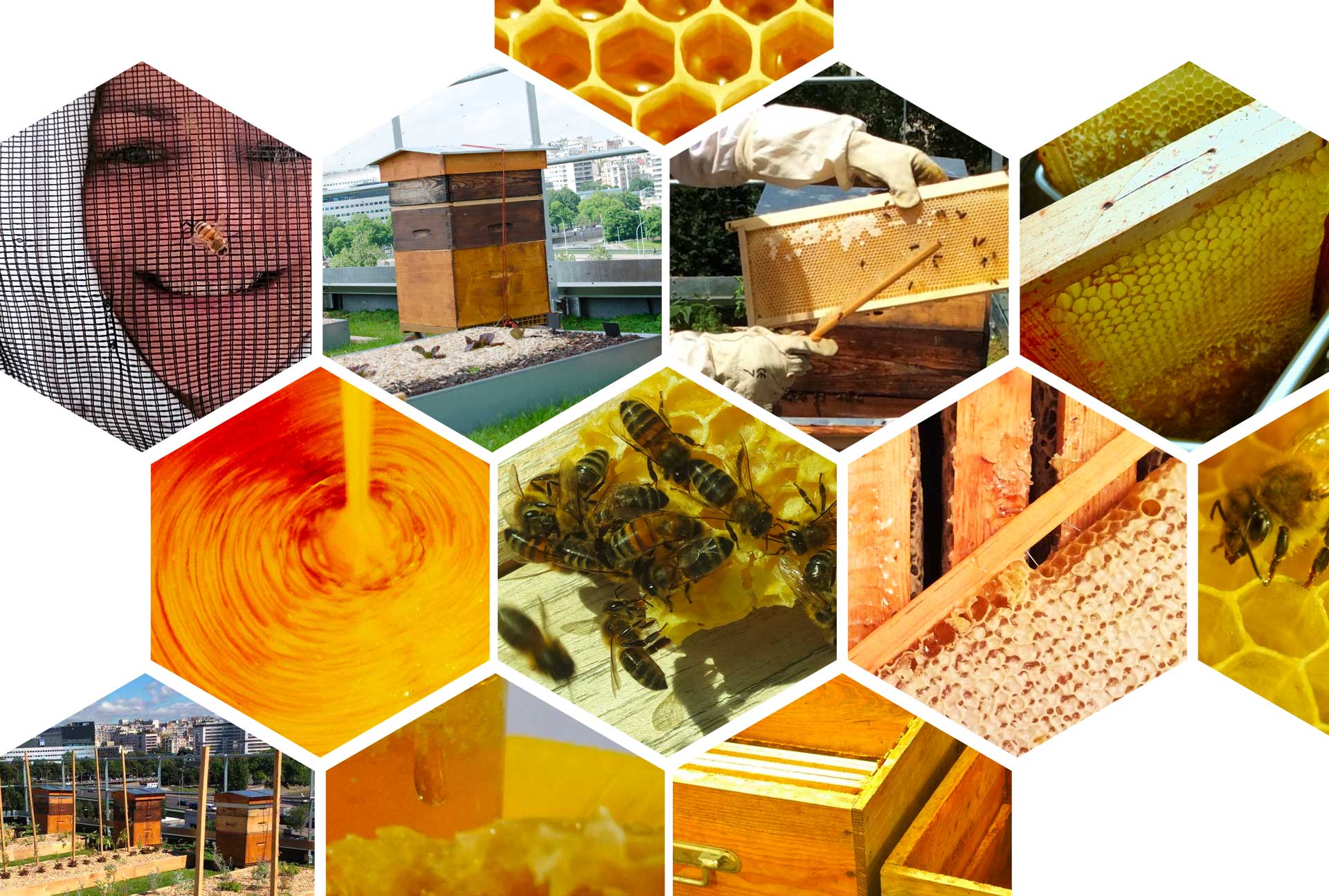 With more than 800m² under cultivation, the vegetable roof garden of the new Le Cordon Bleu Paris institute is the ideal home for beehives. It also provides a very good opportunity for our students to increase their knowledge. That is why we called on the services of beekeeping team For this very reason, we are working with Audric de Campeau, Le Miel de Paris and urban beekeeper, Charlotte Dumas (Apis Urbanica), to develop the apiary and harvest quality honey produced just above our heads.

An apiary is a set of beehives which house bees. Spring and summer are periods in which beehives are abuzz: bees make the most of the urban nectar production (chestnut, pauwlonia, lime and Japanese pagoda trees…) to collect the nectar, honeydew and pollen necessary for feeding and developing the colony, which they transform into honey and store in the hive’s alveoli. During winter, the bees remain inside the hive and focus all their attention on ensuring that their habitat remains at the ideal temperature.

Did you know that these small insects can total from 20 000 to more than 50 000 per beehive? The Queen is the only female who has a reproductive role. During their short life, the worker-bees play around ten different roles in order to meet the needs of the Queen, and of the brood, organize activities within the hive and protect it. The main role of males – known as drones – is to fertilize young virgin princesses.

Are bees that forage in a city capable of producing quality honey?

Absolutely, and honey which is just as good as that produced in a rural setting. The plant environment in a city is healthier, as parks, gardens and balconies are treated without the use of pesticides and bees have access to a variety of different food sources. In addition, bees have an internal filtration system and never introduce a product to the hive which is not of the right quality. A bee usually forages within a 3km radius but can travel up to 10km if nothing is available nearby.

How is the honey harvested?

For the first harvest, which took place in July 2016, the 3 beehives on the roof produced a total of 50kg of honey for a beekeeping season lasting just 6 months.

Harvest takes place between July and August. To harvest the honey, the beekeeper removes the frames of honey from the apiary. Once at the honey house, he uses an uncapping fork, or a knife, to remove the wax lids in order to open the alveoli. The frames of honey are then placed in a machine called an extractor and release their honey thanks to centrifugal force. The honey is pushed out to the sides of the extractor and runs down into a bowl at the bottom. It is then transferred to a vat, where it remains for a number of days, or weeks, to be decanted: the small amounts of remaining wax, wood or bees’ legs rise to the surface of the honey, as they are of differing density, and are skimmed off.

The beekeeper also ensures that around 12kg of honey remain in the hive so that the bees can survive winter as, during this season, the bees remain sheltered and do not produce any honey.

What is honey made of?

Honey is made of nectar, honeydew, pollen, water and enzymes. It is a completely natural product to which nothing is added.

We have decided to make honey classes part of our different Culinary Arts programmes. Designed by Charlotte Dumas – our beekeeper – they aim to heighten students’ awareness of the importance of supporting the beekeeping sector. They also encourage these future Chefs to try new varieties of honey and put their own mark on them through their culinary creations. During beekeeping season, from March to September, students can accompany the beekeeper onto the vegetable roof garden in order to see the life of an apiary close up.


Do you have a question for our beekeeper? Leave a message on her blog. The articles in the “Apiculture” section immerse you, in a clear and simple fashion, in the fascinating world of bees.

Le Cordon Bleu, the leading Global Network of Culinary Arts and Hospitality Management Institutes, celebrated the inauguration of its new campus on Monday 10 ...