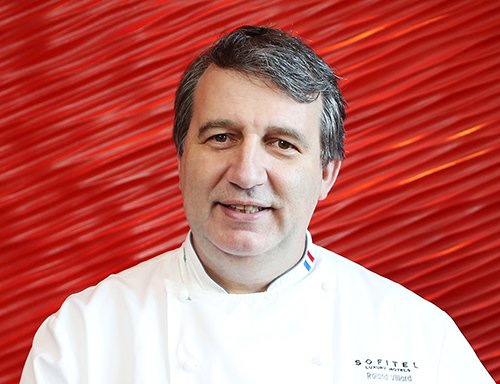 The arrival of the international school of gastronomy Le Cordon Bleu, one of the most renowned in the world, promises to change the gastronomic scene of Brazil. An opportunity for chefs from other countries to know the ingredients and Brazilian cuisine, which is still little explored inside and outside the country, and for the training of new Brazilian cooks. This is what chef Roland Villard says.

For 20 years in Rio de Janeiro, the chef is passionate about Brazilian gastronomy. He was at the head of the kitchen of the restaurant Le Pré Catelan, at the Sofitel Hotel in Copacabana, where he won a Michelin star and was the author of memorable menus that were successful in gastronomy. In his trajectory, he made several re-elections, such as the classic rice and beans, and created unusual options, such as the Amazonian menu and the Inverted Menu, which began with the account, followed by dessert, the main course and ended with the entrance. The chef's creativity has won many awards over the years, such as the highlight of the Rio Show Gastronomy Award in 2015.

In an interview with Le Cordon Bleu, Roland Villard gives key tips to new cooks who are starting their studies: "The kitchen requires total dedication and a lot of concentration while we work, but, above all, the passion for the dish, to always seek to improve. It is a profession that demands many studies. So you have to believe in the dream of having a better life working since the way is very hard and sacrificial", he says.

Read the complete interview with the chef Roland Villard:

After so many years as a chef, how is your experience at Le Cordon Bleu?

Roland Villard: Training is part of our profession. Working in the kitchen is developing people for the future. So training is essential because young future chefs need to have a methodology and keep up with trends in gastronomy. The knowledge that we are going to offer in Le Cordon Bleu is not only the technique, but also the philosophy to follow. What position should the chef have in the market today? How to behave with the team, the board, the customers and the suppliers? It is necessary to know how to seduce the customers and the restaurant management, demand the best products from the suppliers and, moreover, win the confidence of the team itself. They must feel proud to work with you.

When did you start your passion for cooking?

Roland Villard: I was only 12 when I started helping my mother cook. When you are born into a big family with six siblings, you need to stand out somehow. I realized that I could help my mother. And that's how I learned to bake, even because it was a magic to me to see the blend transform. One Christmas, my mother gave me a non-stick frying pan as a gift. I was sad because my brothers laughed at me, since I did not win the same as them. But gradually, I was feeling the pleasure of seeing the happiness and excitement I could offer through food. My brothers started asking me for birthday cake in exchange for other gifts. I realized that the emotion was above any material and that the food causes remembrance and experience. And that's what I loved.

And what was your first work experience?

Roland Villard: I started working at age 16 in a restaurant and as soon as I arrived the chef already complained that I was 10 minutes late and told me to peel 50 kilos of potato. At the time, I remember the chef saying: 'You are a cook and you will cook until the end of your life because that is the profession. The chef is a charge. And one day you can become one, but for that, it will take ten years. ' When I arrived in Brazil, I was surprised because everyone here is a chef. But in France, being a cook is an honor. And I always say that my profession is a cook.


Today we see that there are many young people already assuming the position of chefs. How do you see that?

Roland Villard: People deserve the job because they are much more informed and seek to study. Schools also evolved to form and prepare for a life different from what happened 40 years ago. For me, a school like Le Cordon Bleu forms for life and goes beyond traditional metholodogy, as students learn techniques that can be applied anywhere. It is a much larger opening and students will be able to get to know the world culture of gastronomy.

How is technology changing the gastronomy?

Roland Villard: Technology and the scientific world have helped us greatly to understand the chemical reactions that occur in the kitchen. For example, today, we know why a souffle will grow, but before, the cooks did not have that knowledge. In addition, there are many new techniques and equipment. And Le Cordon Bleu brings all this evolution to the Brazilian students.

Where does the interest in Brazilian cuisine come from?

Roland Villard: I always remember that when a customer goes to a restaurant, wants to be surprised with a different dish, that is unheard of and that leaves a memory. So I always tried to create dishes that could seduce customers and journalists. And it was then, in 2009, that I thought about creating the Amazon Travel menu at the Sofitel. We did a full descriptive menu with all the ingredients in four languages. In 2011, we created the menu Rice with Beans. Brazil has more than 25 varieties of beans and it is important to explore this. And in 2013, I made the Inverted Menu. Dessert, for example, was Madeleine salty. It was a wonderful joke! Already in 2015, I launched the menu Villegagnon, in honor of the admiral who was the first Frenchman to arrive in Brazil.

The potential of Brazilian cuisine can be better explored?

Roland Villard: The Brazilian gastronomy until a few years ago was very home-cooked, excellent, but it had no one to adapt to the standards that we can find in a gastronomic restaurant. The opening of an international school will greatly help the world to explore Brazilian cuisine. The chefs do not know the products of the Amazon and the future is there, because everyone is looking for new ingredients. Perhaps the gastronomy itself can help save the Amazon Forest, because it is the valorization of culture, of the national product. Gastronomic culture is the main factor in the development of the tourist economy. Therefore, governments need to invest to promote Brazilian chefs and export the image of Brazilian cuisine to other countries. At most what is known outside is the feijoada and the gastronomy here is much more than that.

What are the impacts of Le Cordon Bleu's coming to the gastronomy market in Brazil?

Roland Villard: Le Cordon Bleu already has an experience of being in several countries of the whole world. The school allows teachers to move to other countries, following the same methodology but adapted to a new culture. This exchange is great! Brazil needs to start exporting its gastronomy. Peru is an example. With the opening of Le Cordon Bleu in Lima, many chefs who studied at the school are now recognized around the world and are able to give greater visibility to the country's cuisine.

What is your orientation for students entering Le Cordon Bleu?

Roland Villard: The result of the coming of an international school is the evolution of people, life and country. It is fundamental to think that gastronomy is not a television program or internet revenue. It requires a lot of passion. Le Cordon Bleu will help you to develop, to know techniques, but personal posture is what will be most important. Gastronomy, in my opinion, is the greatest social elevator that can exist, because it is a profession that allows you to achieve your dreams, gives you the opportunity to travel all over the world, to know different cultures. Moreover, because it is a school that is already in other countries, Le Cordon Bleu, can open many doors for both students and Brazilian cuisine.

News, Recipe
Raising a glass to our unsung heroes this International Chef's Day