Le Cordon Bleu graduate and British baking icon Mary Berry has been made a dame for services to culinary arts. Following the announcement in October 2020, Dame Mary received her honour at a ceremony with Prince Charles at Windsor Castle. 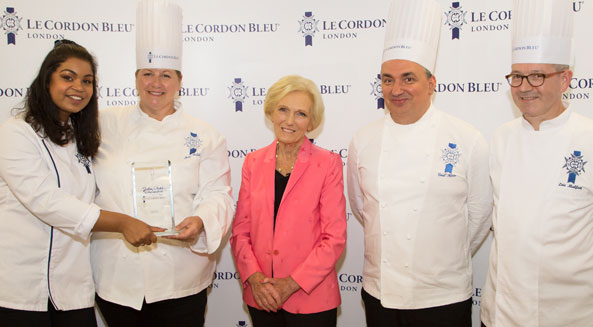 Graduating from Le Cordon Bleu's Paris campus when in her 20s, Dame Mary Berry's culinary career has spanned over 50 years and includes work as an author, writer, chef, baker and television presenter. With over 70 cookery books published and 11 of her own television programmes, her impact on the culinary arts is without a doubt significant, particularly within the UK.

Dame Mary has appeared regularly on TV's since the 1970s, but it was her time spent hosting The Great British Bake Off (2010-2016) which saw her inspiring yet another generation of budding bakers.

The Queen's Birthday Honours recognise and reward citizens who have had a significant and honourable impact to society in the UK and any of the 15 Commonwealth realms of Queen Elizabeth II. Dame Mary Berry was first appointed Commander of the Order of the British Empire (CBE) in 2012 for services to the culinary arts, before this recognition was first announced in October 2020. The official title of the damehood honour is Dame Commander of the Order of the British Empire, regularly written as the abbreviation DBE, for services to broadcasting, the culinary arts and charity.

In 2012, Dame Mary was awarded an Honorary Diploma from Le Cordon Bleu to recognise her contribution to the culinary arts, which has helped inspire generations of individuals to enter the culinary industry. More recently, Dame Mary supported the 2019 Julia Child Scholarship by Le Cordon Bleu London, as the main chef ambassador and announcing the winner of the scholarship.

Cheryl Puteri graduated from Le Cordon Bleu New Zealand in 2015. She is a rising star in the Indonesian culinary industry after winning MasterChef Indonesia ...