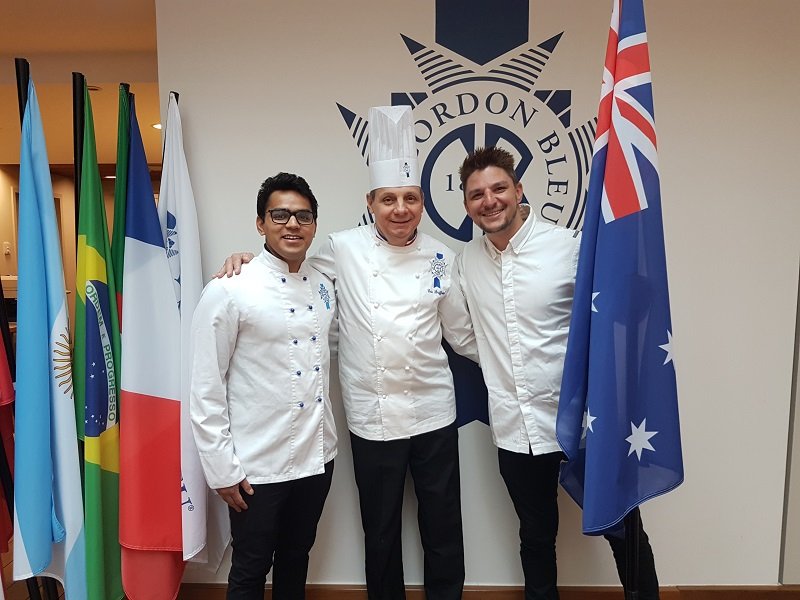 We met with Abhishek Thorat and Michael Demagistris who both won the Thierry Marx Career Development Award sponsored by Le Cordon Bleu — an opportunity to ask them about their incredible experience in Paris!


What brings you here, in Paris?

Abhishek Thorat : Recently, I won a cooking competition called Thierry Marx Career Development Award which is held in Victoria, Melbourne. As a prize, I got a trip to Paris for three weeks. The trip was to stage for Thierry Marx at Mandarin Oriental and at Le Jules Verne on the Eiffel Tower.

The trip was also to explore the wonderful city of Paris and to understand a bit about the French food culture. Also, spending a few days at Le Cordon Bleu Paris was an amazing experience. Not forgetting to mention the conference by Michel Guérard, and how cooking times changed from Haute cuisine to Nouvelle cuisine.

Michael Demagistris : I have just been announced the winner of the Thierry Marx Career Development Award for 2019. The prize includes airfares, accommodation and three weeks in Paris with 14 days training under the guidance of Thierry Marx and his team at the Mandarin Oriental Hotel.


What does French culinary arts represent to you?

Abhishek Thorat : French culinary arts are a foundation of cooking to me. In the cooking school I went to in India, the first thing we were exposed to was French cooking. The history, classic recipes, techniques, transformations and how it is the foundation to most of the cuisines in the world. Even today, at the restaurant I work at in Melbourne. Even though the cuisine is modern Australian, it still has French cuisine foundations. For me, French culinary arts will always be about techniques, discipline, consistency, and it is something which I will always remember and implement it in my style of cooking throughout my career.

Michael Demagistris : To me the act of cooking brings back experiences and a whole range of memories, from good family times to travel and early memories at culinary school learning the basics of cookery. One of the first dishes I had ever cooked was Coq au vin a traditional french dish of chicken braised with wine, lardons, mushrooms and garlic. To this day it is still one of my favourite dishes I like to cook at home for my wife and three kids.

What is your plan for the future?

Abhishek Thorat : I am planning to work in Melbourne for two years, then move to work in some of the selected top restaurants for the next couple of years and travel, maybe somewhere in Europe. Focus on building my confidence and consistency in cooking, learning new techniques and honing my skills. Eventually, I will get back to work with some great chefs in India, implement my style of cooking and philosophy and contribute to Indian hospitality to bring it forward!

Michael Demagistris : As a chef, I believe that continued learning is vital. I was thrilled to win this award to further solidify my skills as a chef, make me better equipped for modern cuisine, and give me currency to put back into programs that help people throughout food service. I believe it's not what you can achieve alone that makes you truly remarkable, but how many people you can lift up with you.

At the age of 30, Nuno decided to follow his passion for pastry. Portuguese by birth, he put aside his career as a doctor and flew to Paris to enrol in the ...

Le Cordon Bleu Paris is happy to announce the reopening of the institute on Monday, 6th July. All teams are looking forward to welcoming students, employees and ...