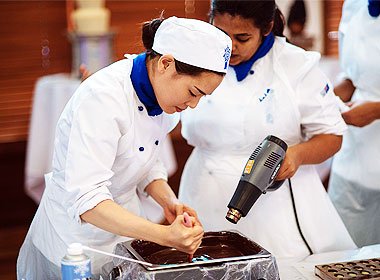 Cheese and Dairy products have a long history with the Royal Agricultural Society of NSW, with a tradition of competitions that stretches back more than 150 years. The Sydney Royal Cheese & Dairy Produce Show has been operating in its current format since 1994. The Competition is held annually in the second week of February. Attracting between 900 and 1,000 entries in 130 classes, the Sydney Royal Cheese & Dairy Produce Show is one of the most prestigious and competitive events in the dairy industry. Products judged include an extensive range of cheese, milk, butter, dip, dairy dessert, gelato and ice cream created from bovine milk as well as sheep, goat and buffalo milk. The Show incorporates The Sydney Royal Competitions, which features the very impressive Showpiece class.

The student’s quality entries were presented and judged against industry and commercial standards for taste, innovation and presentation.  Four  Silver medals were presented to our winning students, congratulations to:

Kelly had the highest aggregate mark and won overall for the class.  But moreover, it was a great experience for all participants and supported with great mentoring by teaching staff.  Well done to these students; their entries look absolutely delicious!

Additionally, student competitors supported the night by creating a “Chocolate Strawberry Fields” buffet that included a spectacular chocolate cow!  They dipped strawberries in chocolate and demonstrated their work on the night.

Fantastic effort by all involved; congratulations to our Le Cordon Bleu participants!