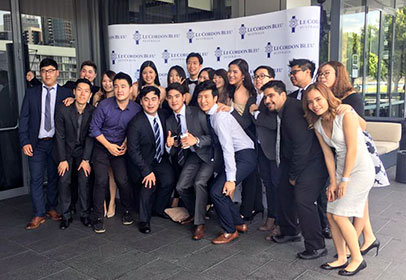 Those in attendance were treated to a presentation by guest speaker, Alejandro Saravia, who is co-owner of Pastuso Peruvian Restaurant and Cevicheria Bar, serving the best Peruvian food to the city of Melbourne for nearly 2 years, and winning several awards along the way.  Growing up in Peru, South America, Alejandro was introduced to the strong flavours and variety of ingredients of Peruvian cuisine from an early age.  As well as studying at Le Cordon Bleu, Alejandro has worked at esteemed venues in Peru and Europe, including the Fat Duck (London) and Le Ambassadeurs (Paris), as well as prominent Sydney establishments including Salon Blanc (Australia) and Sails on Lavender Bay (Australia).

Together with their graduation parchments, Le Cordon Bleu graduates received medals that hold a rich tradition.  The origin of the name ‘Le Cordon Bleu’ dates back to 1578, when Kind Henry the 3rd of France established the highest and most exclusive order of knighthood – The Order of the Holy Spirit.  They were identified by wearing a gold cross on a blue ribbon.  This elite group set high standards for themselves and those who served them, and soon the notion of a blue ribbon became synonymous with skills of the highest calibre. Le Cordon Bleu Medailles are bestowed on Le Cordon Bleu graduates for their individual achievements in academic excellence, signifying their entry into the industry as elite achievers.

In addition to the Dux awards there were two other accolades presented to students; The ‘Patrick Harris Award’ and the ‘Hans Schings Memorial Award’. The ‘Patrick Harris Award’ is presented to a student who has shown great determination and overall improvement in their current stage. Patrick Harris was a founding chef lecturer at the Sydney Culinary Arts Institute, and this award was presented in his honour to Wenny Oey.  The late ‘Hans Schings Memorial Award’, is presented in memory of Hans and his dedication and love of the culinary industry.  Hans Schings was a commercial cookery teacher and Head Teacher in TAFE where he trained hundreds of apprentices.  As a committed teacher and judge, Hans was the chief assessor for Le Cordon Bleu for almost a decade.   The student who has represented Le Cordon Bleu to the highgest standard during their six month industry placement and received the ‘Hans Shings Memorial Award’ was Sz-Yung Wang.

Congratulations to all graduates and award winners! Le Cordon Bleu wishes you all a great future and much success in your gastronomic ventures.

Le Cordon Bleu Australia recently welcomed lecturer Xavier Mouche to the School of Business team. This month we sat down and got to know the man behind the ...