The Food Makes the Splash at Molitor Paris

When one thinks of Molitor Paris, the first thing that comes to mind is the iconic swimming pool. Built in 1929, the Art Deco pool attracted socialites from all over such as Johnny Weissmuller, known for winning five Olympic gold medals for swimming in the 1920s and later for his role in Tarzan films he reprised over the next two decades. Conveniently located just on the outskirts of La Ville Lumière, Molitor has always been a place to see and be seen. Guess where the Bikini was introduced back in the mid-40s? Yup, you guessed that right: Piscine Molitor. 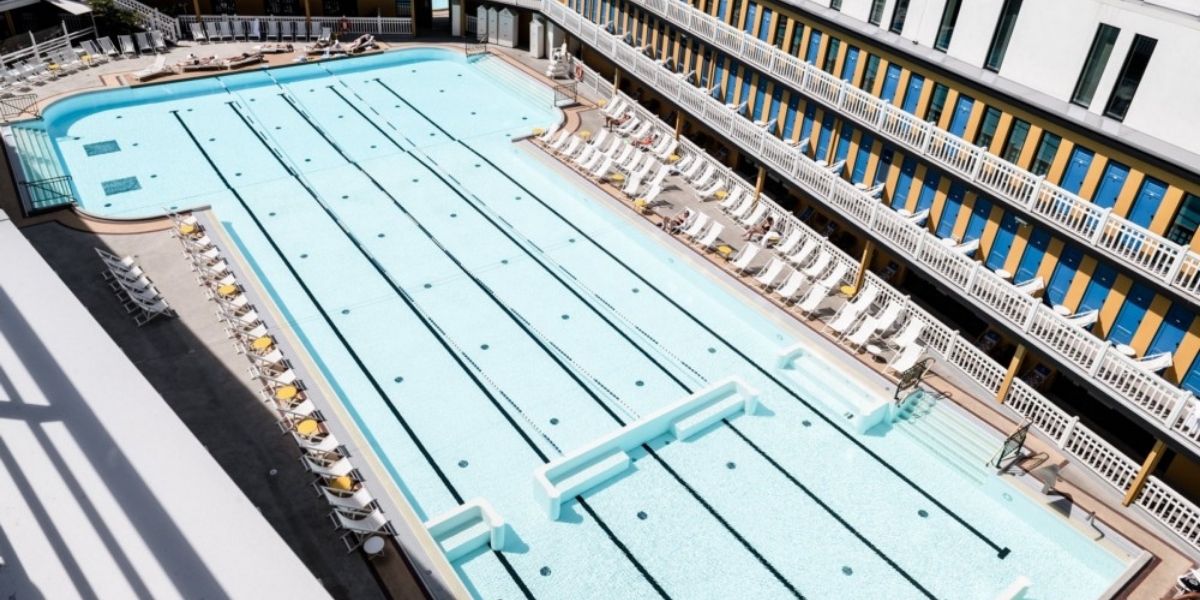 The chic retreat close to the buoyant city has now turned into a street-art-inspired hotel. The hotel welcomed a brilliant young new chef during the pandemic last summer: Martin Simolka. He had just launched his new menu when the hotel was shut down for months.

Now, with restaurants reopening this summer and Parisians about to reclaim a bit of their joie de vivre, Chef Simolka is ready for launch 2.0. He confesses that “although he has yet to take a plunge in the iconic pool” he plans on his food making a splash as he goes through the reopening. “It’s like starting all over again”, he says. “This summer is very much like a second launch”. 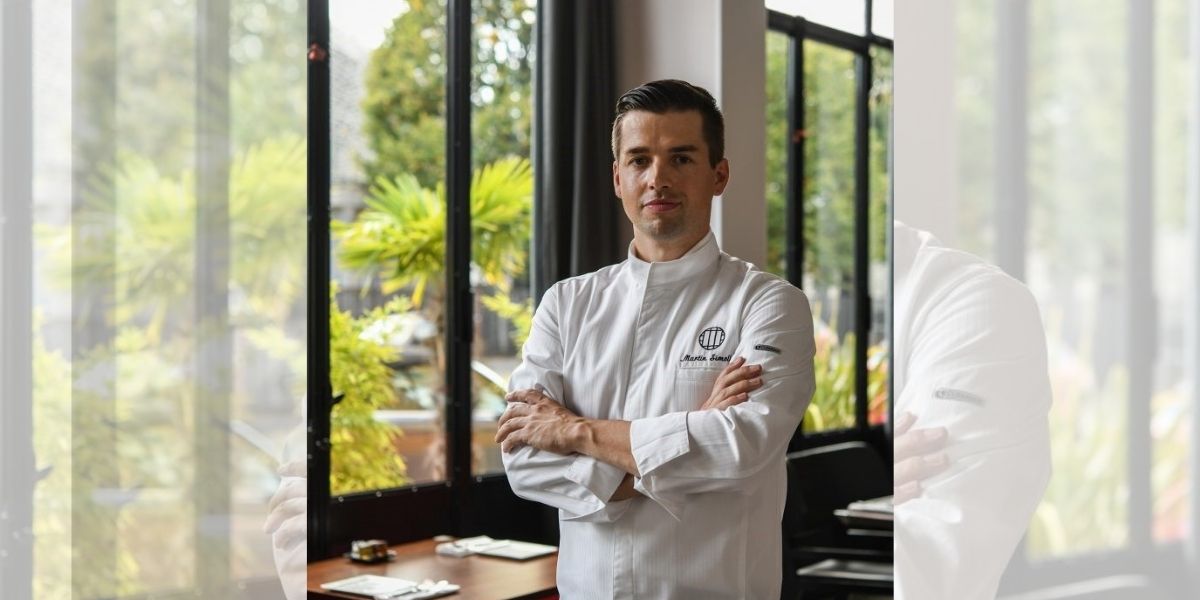 Despite only being in his mid-thirties, the young chef has extensive experience in palace hotels. He started in Germany and quickly moved to the French Riviera, where he spent a year and a half of his early career at Martinez Hotel in Cannes.

He then moved to Paris and spent time in prestigious kitchens headed by talented Chefs: Philippe Labbé (at Ledoyen Pavilion, the Shangri-La Hotel), and Eric Briffard and Christian Le Squer (Four Seasons George V). But his best palace memories come from the Peninsula: “I learned so much as first sous-Chef there. Working alongside Chef Christophe Raoux was a fantastic experience. In a palace, you have access to the best ingredients and can be creative: the possibilities are endless.”

At Molitor, the Chef is bringing his wealth of knowledge and techniques to his first role as a head chef: “This is a challenge for me and it is exciting for several reasons.”

“Take the rooftop for instance”, he says. There, Simolka offers Mediterranean cuisine with a twist: a traditional dish to which he adds an unusual ingredient. For instance, Simolka’s take on the rosemary free-range poultry fillet has a traditional south of France feel through the Provence zucchini, purple artichokes, and tomatoes that come along, but the black lemon yogurt and Colombo sauce will take guests much further east. 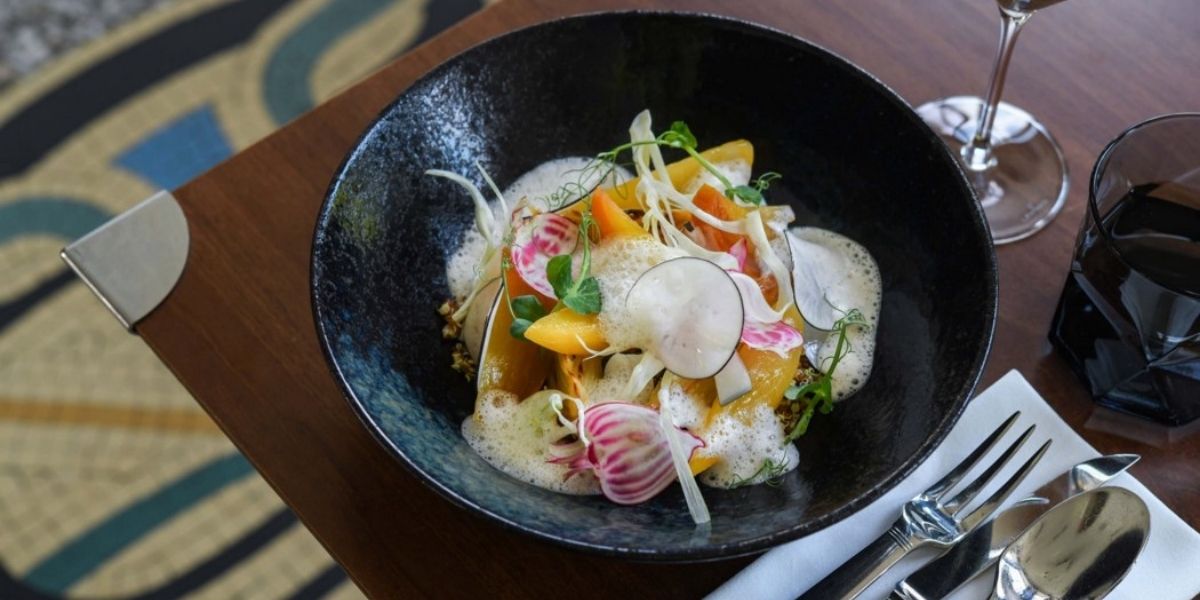 When guests come to the Brasserie Urbaine, it will be a different atmosphere. “I wanted to revisit the classics of a typical Parisian brasserie, while bringing my touch of peps, originality, all that with great quality products,” he said. “Also, I have always liked working with spices from around the world and I always try to add something new and surprising to all of my dishes.”

Simolka’s raw, authentic, and seasonal menus include dishes like grilled organic prawns, accompanied by a small salad of cherry tomatoes and eggplant caviar. His take of the Croque-Monsieur is an old-fashioned finger-licking pleasure thanks to a generous comté cheese and béchamel sauce, with freshly shaved truffle slivers on top.

Those with a sweet tooth will not be disappointed by the desserts list either, including a lava cake Guanaja 70% chocolate and roasted sunflower seeds, or a surprising rice pudding with tonka beans and rhubarb in several textures.

With many more dishes to discover on the menu, it looks like Hotel Molitor is about to be one of the places to be again this summer. Bring the sunscreen to lounge by the pool and make sure you stay for lunch or dinner.

About the author: As a lifelong foodie and travel enthusiast, it seemed natural for Philippe to start writing about his two passions. Having spent the last six years working in international students’ recruitment for Le Cordon Bleu Paris, Philippe has had the occasion to travel around the world extensively, talking about what he knows best and loves: food.
His Instagram began as a digital scrapbook to hold his best photos, sharing memories about these trips and the incredible dining options like-minded travelers should not overlook. @travelsfood_phil