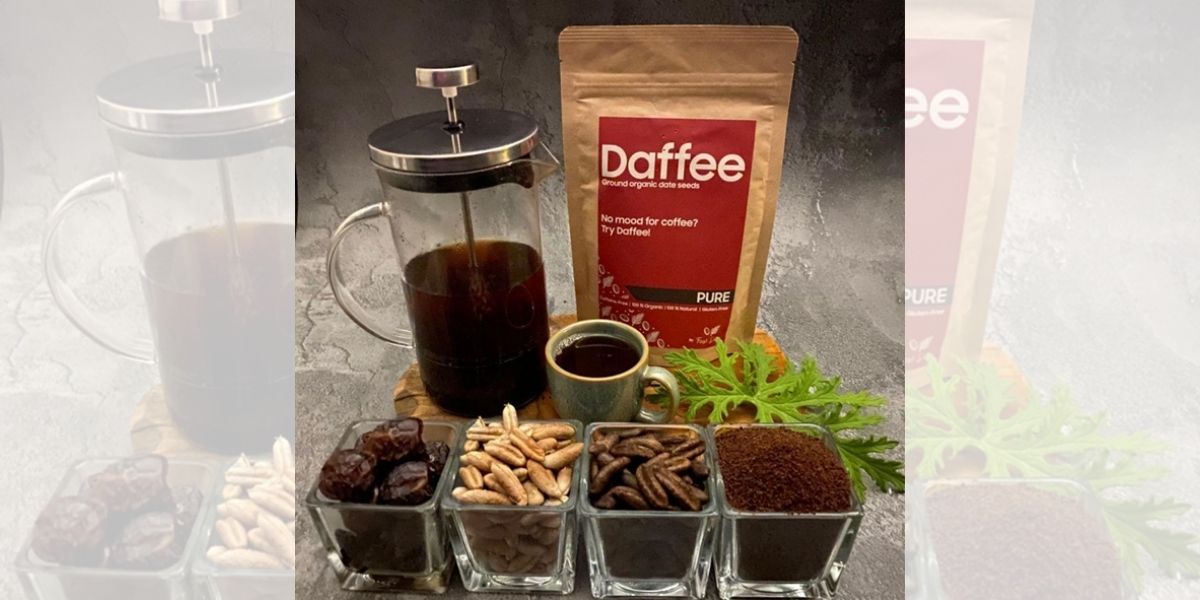 They say good ideas start with great coffee. But what if caffeine wasn’t the only source of mental stimulation? What if there was another way to naturally awaken the giant within? Meet Daffee: An organic certified caffeine-free energy booster drink made entirely from up-cycled roasted date seeds.

A stimulant surprisingly similar in taste to instant coffee, but slightly more robust, natural, and nuttier, the founders Rahaf Al Lymoni and her husband Tamim Kbarh came up with the name Daffee as an homage to coffee, a clever wordplay between date and coffee. The couple who sources organic dates has a special secret recipe as to how they grind and flavour their date seeds.

As a caffeine-free hot beverage alternative, they wanted to fill the gap between coffee and tea and came up with five distinct flavour profiles to blend the two worlds together. The tastes include pure, orange peel, natural cardamom, vanilla and the limited-edition cinnamon flavor.

From refugees to entrepreneurs, the owners of Daffee, Rahaf Al Lymoni and her husband Tamim Kbarh, who are Syrian of origin, started their company three years after they met and got married online. It was a true love story. Rahaf was based in Syria and he was based in Turkey. She could not travel to her future husband, and after four Turkish visa rejections, she decided to head to a refugee camp in Spain where on a scholarship basis, she attained her master’s degree. Eventually her future husband spent all his savings so he could be trafficked to the Netherlands through Greece and Belgium. They both ended up asking for asylum in Holland, and this is where they saw each other physically for the first time, at the refugee camp gate in March 2019. From thereon, the passionate couple decided to start their own company and received a handful of support along the way to achieve their dreams.

The way the concept became a reality was blessing in disguise. Rahaf had undergone surgery because of a stomach issue she experienced in 2013. She started losing crucial nutrients due to her dietary restrictions post surgery and was advised by doctors to include date fruits into her diet. She soon realized the benefits of the kernels, which planted the seed in her mind, that one day she could make a business out of it. Seven years later in August 2020, Daffee finally became a realization.

After the couple received their Dutch residency permits, they found a program named Forward Incubator; a 4-month program that empowers newcomers to launch their businesses.

Date seeds boasts more than 15 different types of protein, is full of fibre and reduces cholesterol. Amongst the many other health benefits associated, Rafa’s favourite thing about dates seeds is that they are free from caffeine, lead, flavourings, dyes and preservatives. “We know that people will never stop drinking coffee, so the coffee sector will always move full speed ahead, but people like to try new things.” Rahaf said, pointing to matcha, chicory and chai.

Despite facing many political and personal adversities in addition to a pandemic, Daffee has managed to filter into the coffee scene and is a unique concept that has received impressive accolades, such as The Heineken prize for best new idea. The couple also received a small fund from Forward Incubator after winning the incentive prize. They are currently selling their products online and looking for distributors to work with across The Netherlands.

For Daffee this is just the beginning of a fruitful adventure ahead.

About the author: With her love of food & travel, Sam Arshi has always been interested in food trends and why certain foods become so popular. Traveling around the world has allowed her to experience different dishes and cultures. As a certified life and health coach, she lives by the adage, that we must eat to live and not live to eat. This balance allows her to understand what it means to be healthy, while enjoying the pleasures that food has to offer at the same time.