Mamie Has The Last Laugh

Mamie, by chef Jean Imbert, will be shutting down on 2nd July 2021, on the heels of his appointment as the successor of Alain Ducasse at the Plaza Athénée. This announcement from the winner of Top Chef France 2012 to his 421K Instagram followers came just the week before. As a FOMO-afflicted Parisian, I felt lucky to snag a reservation for their penultimate lunch service.

The interiors at Mamie

Mamie, a moniker for Imbert’s beloved grandmother Nicole, who passed away late last year, first opened in the spring of 2019 in the upmarket 16th arrondissement. The well-heeled neighborhood clientele consisted of newly arrived plastic surgeons, corporate lawyers and television personalities jostling for spots with its more understated, older denizens — French nobility, industrial tycoons and political dynasties. The chef is no stranger to show business either. There are photos of him sitting at a table at Mamie, presumably after hours, with Madonna. Pharell Williams, blown away by Imbert’s talent, now co-owns two of his restaurant ventures — Swan in Miami as well as the recently opened ToShare in Saint Tropez.

Mamie’s meticulously designed shabby-chic interiors evoked the kind of nostalgia that a French 30-something might feel upon visiting their grandmother at her country home. The dominant color palette was sepia-toned. Faded floral wallpaper covered the walls. The artwork included botanical frames containing dried leaves and flowers. Outdoor tables had white tablecloths while the ones inside were bare. The vintage Limoges porcelain, depicting orangutans swinging from trees, was in mismatched colors.

Our smiling hostess led us to our table for two, where a crisp half-baguette waited invitingly, next to an Opinel hunting knife with “Mamie” carved into the wooden handle. The menu, printed on handmade paper, was as retro as its contents. Even with only four appetizers, five mains and three desserts, there were options for carnivores, pescatarians and vegetarians alike. Our appetizers arrived quickly. Four thick slices of seared Morteau, a salty, fatty, smoked pork sausage from the Franche-Comté region, sat on a bed of nutty Puy lentils covered with artisan lettuce, delicately coated with a simple vinaigrette. 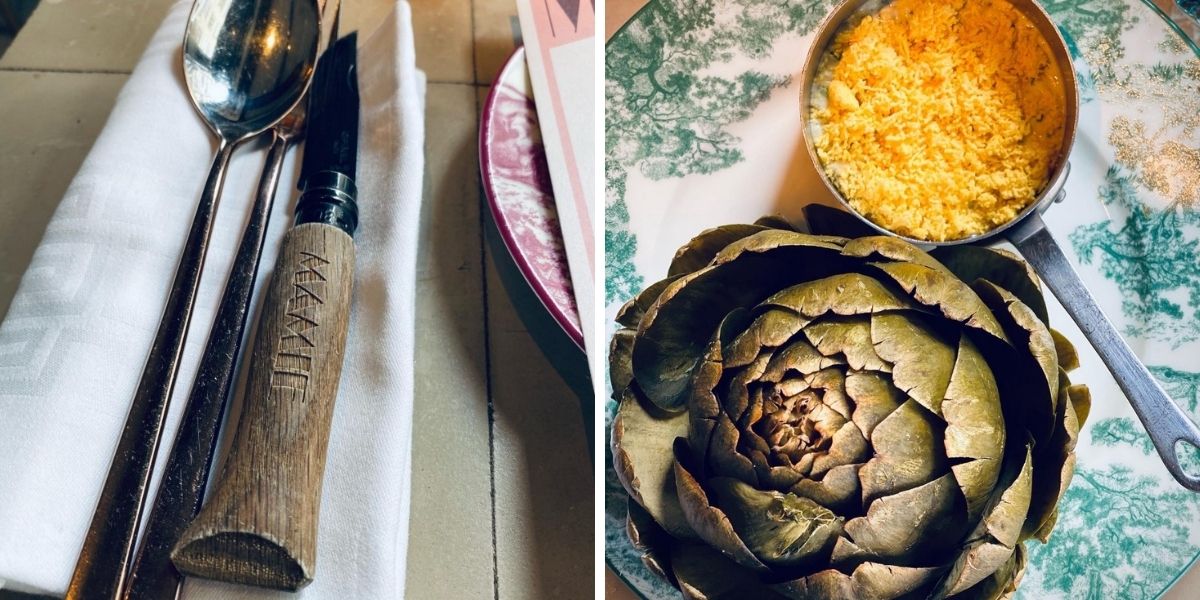 A Camus artichoke from Brittany, ash green and as big as a cauliflower, came with eggs ‘mimosa.’ We pulled apart each artichoke leaf, dipping it into the mimosa– the sprinkling of yolk fragments is evocative of the yellow flowers in full bloom – until we got to the fleshy heart. The biggest conundrum was to make the dip last until the end, due to the formidable size of the artichoke.

For a discerning French gourmet, however, there are inviolable sanctities that must not be transgressed. No amount of television fame can fix a botched red wine sauce or a slightly overcooked fish that has gone from nacré or pearl-like to opaque. Our mains arrived in their copper Mauviel containers – sea bream gratin and beef tenderloin served with a classic gratin dauphinois. The sizeable fish fillet, dusted with toasted breadcrumbs, swam in a lemon, butter and white wine sauce. The preparation also incorporated cooked and raw spinach and cremini mushrooms, the double texture lending a subtle sophistication to the dish. 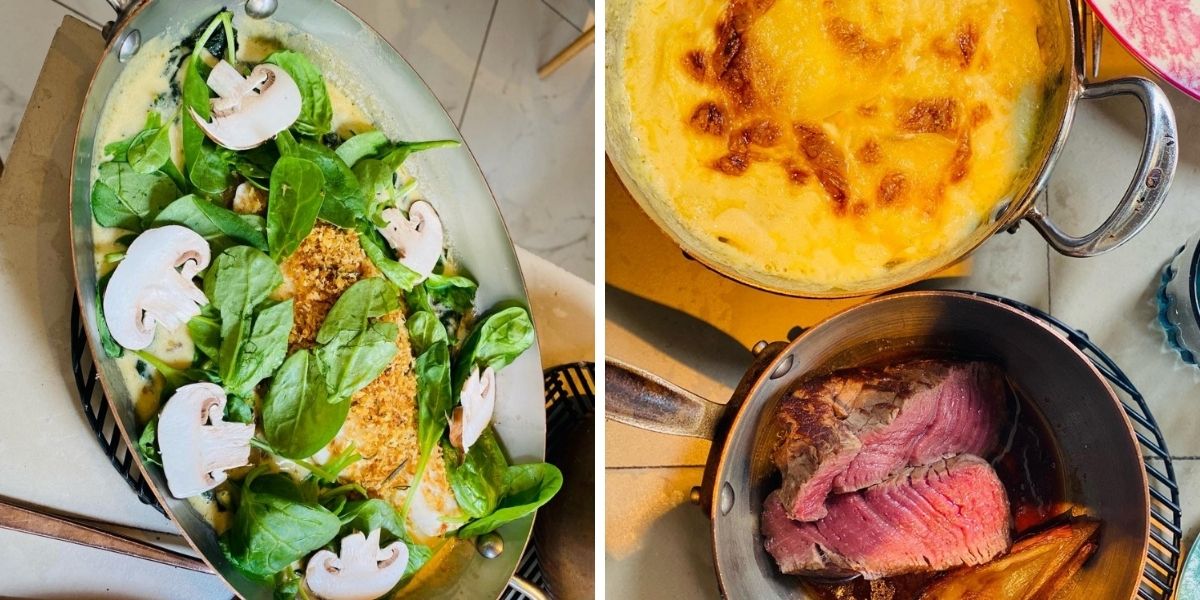 The thick-cut beef was rare and tender, served with a whole shallot, left to confit for hours in a velvety, bold red wine sauce. The gratin dauphinois was by the book and could have been cooked by Auguste Escoffier himself. There were no false notes.

Cédric Grolet, France’s most famous pastry chef, conceived all desserts on the menu. Our cherry clafoutis exited the oven in a red ramekin. Lukewarm, with a contrasting dollop of cold clotted cream, it was a thick meshwork of intensely sweet, just-harvested cherries, held together with soft eggy vanilla batter.

The meal for two cost US$ 144. The high price point was one of the only criticisms voiced on social media. In my assessment, the portions were simply double the size served at comparable chic Parisian establishments, which should offset the steep price tag.

After Mamie’s passing, chef Imbert posted a family photo on Instagram from her 90th birthday celebrations at the Plaza Athénée a few years ago. In the photo, he is standing behind her, pranking her with bunny ears. Although the restaurant named after her closed its doors over the summer, her beloved grandson has since replaced Alain Ducasse, the most decorated chef in the world, at the Plaza Athénée. Detractors from the stodgier sections of the French culinary community have expressed disappointment at the Plaza’s decision to let a young ‘celebrity chef’ preside over its kitchens. Unfazed, Imbert has been delighting his fans with Instagram posts showcasing his innovative take on classics such as Moules Frites and Îles Flottantes at Le Relais Plaza since he took over in early September. It would seem that Mamie is having the last laugh now.

About the author: Amrita Sarkar is a graduate of Le Cordon Bleu Online Learning Food Writing for Publication course. A freelance food writer and recipe developer based out of Paris. She has grown up, lived and worked on three continents (Asia, North America and Europe) and has been living in Paris for the last decade. During this time, she has worked as a Venture Capital Investor and technology professional and has published a few related articles on her Medium blog She also documents her cooking/eating adventures on her Instagram food blog @the_venture_foodie.